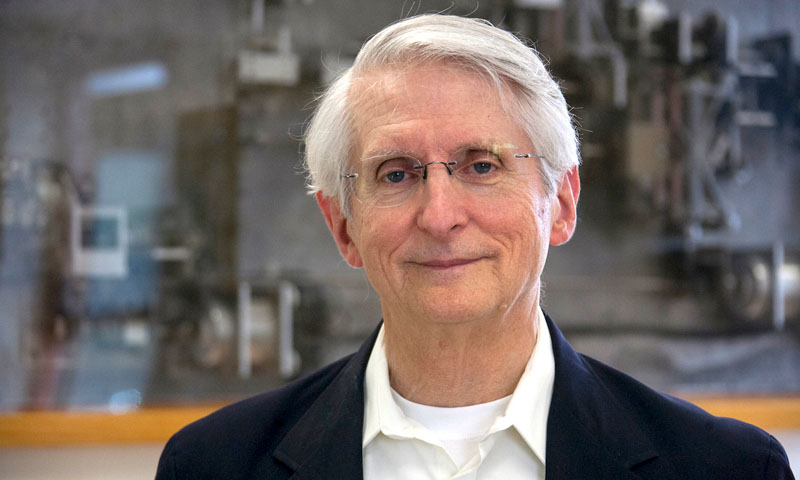 After 18 years as chair of the university’s Department of Computer Science and an extraordinarily accomplished career that spans five decades, Dr. Peter Denning reflects on his many contributions to the field of computing, but is keenly focused on his next challenge to advance intelligent systems capabilities in the Navy and the university’s role in educating tomorrow’s AI workforce.

It has been said that technology advances at an extraordinary speed … What, then, would be said about a mind that has been innovating in the field of technology, always a step ahead, for more than half a century?

Such has been the career of Dr. Peter Denning, Distinguished Professor of Computer Science at the Naval Postgraduate School (NPS) who even today after a 50-year career of thoughtful and remarkable achievements in the field computing stands at the beginning of his latest effort for the university. As a creator and first chair of the Consortium for Intelligent Systems Education and Research (CISER), Denning and his NPS colleagues have developed a collaborative effort to advance intelligent systems capabilities in the Navy.

In addition to CISER and its potential for extraordinary contributions, Denning’s Harnessing Artificial Intelligence course has already levied a powerful impact on workforce development in this complex, critical field. In fact, the DOD’s Joint AI Center has already incorporated multiple lectures into its instructional materials, with further potential already in the works.

In this cognitive age, where intelligent systems, big data, machine learning and artificial intelligence (AI) are increasingly augmenting human activity and decision-making, his contributions represent a natural continuation of NPS’ core mission, which has remained unchanged since its inception in 1909: to provide military officers with the advanced education necessary to fight and win future wars.

Drawing on a passion for advancing AI for Department of Defense applications, Denning envisions CISER driving into a future dominated by intelligent systems in which education, research and innovation will be the deciding factors in establishing the warfighting advantage of the Naval services. As NPS looks beyond the turbulence of 2020, the work of this group will resonate throughout this emerging and critical domain for chapters to come.

In the 52 years since Denning graduated from the Massachusetts Institute of Technology, he has been a veritable cornerstone of the computer sciences. He has published over 440 articles in the field and 12 books. He’s been the recipient of 32 notable awards, including three distinguished service awards, three honorary degrees, three professional society fellowships, twelve technical achievements, eight best-papers, a hall of fame award, and several outstanding educator awards.

This extraordinary career began while still a doctoral student at MIT. In 1968, Denning discovered what would become a fundamental principle of computing, the locality principle. Locality says that executing computations use small subsets of their data for extended periods with abrupt jumps between subsets.  Based on this principle, he invented the working set concept, which solved three vexing performance problems with virtual memory – slowness in moving pages of data between levels of memory; thrashing, a complete collapse of performance when too many programs were running at the same time; and automatic load control for optimal throughput.

Denning’s working set was a game-changer, allowing computer scientists to predict what instructions and data a program will use based on where it previously looked. He became known as a virtual memory performance pioneer whose work made a nascent technology stable, reliable, dependable, and transparent.

The locality principle “transformed virtual memory from an unpredictable to a robust, self-regulating technology that optimized throughput without user intervention,” he noted in a 2005 retrospective.

“Virtual memory became such an engineering triumph that it faded into the background of every operating system, where it performs so well at managing memory with multithreading and multitasking that no one notices.”

His seminal paper, The Working Set Model for Program Behavior, earned Denning the Association for Computing Machinery’s best paper award for 1968.  And he was inducted into the Operating Systems Hall of Fame in 2005. The working set model has since become the universal reference model for computer memory management and the foundation of memory caching systems, which are now part of all computers and the Internet.

The development of the Internet itself can draw a direct line of continuity to Denning’s work. After teaching at Princeton University for four years, Denning joined the computer science department at Purdue University. There, he worked in the early 1980s as one of four Principal Investigators in a collation of four universities with NSF sponsorship to develop a network, CSNET, for the computer science community based on the DOD’s Advanced Research Projects Agency Network (ARPANET).

CSNET was a new open research community, which soon connected computer science and engineering departments in the U.S. and Europe that had previously been unable to access the ARPANET.

“It was the first step of the journey. We pulled it off and it was done well,” Denning recalled in a 2009 NPS interview. “It feels nice to be recognized for all that work, but we weren’t looking for recognition, just a good network.”

In a few short years, CSNET burgeoned to link more than 180 academic and research institutions with 50,000 members around the world. CSNET gave the NSF the confidence that it could build a much larger network, NSFNET, which became the backbone of the modern Internet.  CSNET enabled the transition of the closed ARPANET to the Internet as we know it, radically altering connectivity, communications, and the world.

CSNET was recognized in 2009 by the Internet Society through its Jon Postel award.

In 1983, Denning went to NASA-Ames to serve as the founding director of the Research Institute for Advanced Computer Science (RIACS), a collaboration with the Universities Space Research Association (USRA). Under his aegis the institute became one of the first truly interdisciplinary research centers for computational and space sciences and provided a vital link between NASA and the academic community.

Denning then joined George Mason University in 1991, where he chaired the computer science department. He additionally served as the Associate Dean for Computing, Vice Provost for Continuing Professional Education, Chair of the Technology Council and special assistant to the vice president for information technology.

In 1993, he founded the Center for the New Engineer (later renamed the Hyperlearning Center), where he and his partner Danny Menascé broke new ground in offering the first online competency-based learning modules. They developed interactive tutorials, a network connecting K-12 schools with the Internet and the “Hyperlearning Meter,” a novel self-assessment and certification tool.  They developed two online modules for the Defense Acquisition University (DAU).

When Denning joined the NPS community in 2002 as Chair of the Computer Science Department, he was a well-established leader in computer science research, education, and advocacy. He brought with him a profound depth of knowledge which he now applied to a host of DOD issues. Over the next 18 years, he became a definitive voice in deepening NPS’ capacity to advance the education and capabilities of the Navy and the nation’s military officers.

As Director of NPS’ Cebrowski Institute for Military Innovation, Denning spearheaded research into a more efficient architecture of battlespace communications systems and laid the groundwork for a World Wide Consortium for the Grid for the DOD. He initiated the Great Principles of Computing project, an ongoing effort to gather and clarify the essential principles of computing to enable discussion of information processes across scientific fields. From this, Denning created a Great Principles of Computing technology course for incoming graduate students to impart the foundational knowledge necessary to take on advanced technological problems.

He founded the Hastily Formed Networks Project, answering DOD’s call for disaster relief communications systems, a network (physical, social and informational) which could swiftly be formed in the wake of devastating crises to facilitate disaster relief, humanitarian assistance and military operations.  He founded the program “Sense 21: innovation leadership”, which teaches the skill sets by which innovation leaders bring innovations into practice in their communities.  The program has graduated around a hundred innovation leaders and has partnered with the then Naval Warfare centers.

These are just a few examples of Denning’s many contributions to NPS, its students and the military. He continues to push the frontiers in crucial areas, including operating systems, high-performance computing, global security, network science, information storage and security in cloud systems, data science and AI.

These have taken on greater salience as intelligent systems take on a greater role in human affairs, including warfare. Just as the emergence of the aircraft carrier induced radical change in naval operations from World War II to the present day, networking and artificial intelligence are profoundly changing the balance of power in naval operations around the world.

“Today the pattern of radical change is recurring. The rapid rise of digitization and networking signal the beginning of a new era that may, one day, take us beyond the carrier’s primacy. Indeed, by our reckoning, when that change comes the next capital ship is likely to be virtual: a swarm of platforms, including carriers, plus countless digitally controlled entities – some remotely controlled, others fully autonomous,” Denning observed in a recent award-winning essay co-authored with John Arquilla, Distinguished Professor in the NPS Defense Analysis Department.

“Artificial intelligence will profoundly influence sea power in the coming years,” wrote Denning and Arquilla. “It will change the game for organization, doctrine, policy, and operations. And, most importantly, it will change the areas in which we expect our Officers, Sailors, and Marines to become knowledgeable and proficient.”

Such expertise, they note, requires powerful tools and sophisticated practices, skilled engineers, mathematicians and statisticians to design, build and sustain intelligent systems. CISER seeks to cultivate just that: a combined, collaborative effort by the NPS community to provide the education, research and innovation which will sharpen the tip of the spear for the naval services for decades to come.

When asked how he has kept pushing into new areas over the past half century, Denning replied, “I am am always a beginner.  There is always something new to learn and new teachers to engage.  Most of the time, my past expertise is only marginally relevant to the next set of concerns I am drawn to address.”