A-10 Transformation Will Lead to Big Research Opportunities for NPS

A-10 Transformation Will Lead to Big Research Opportunities for NPS 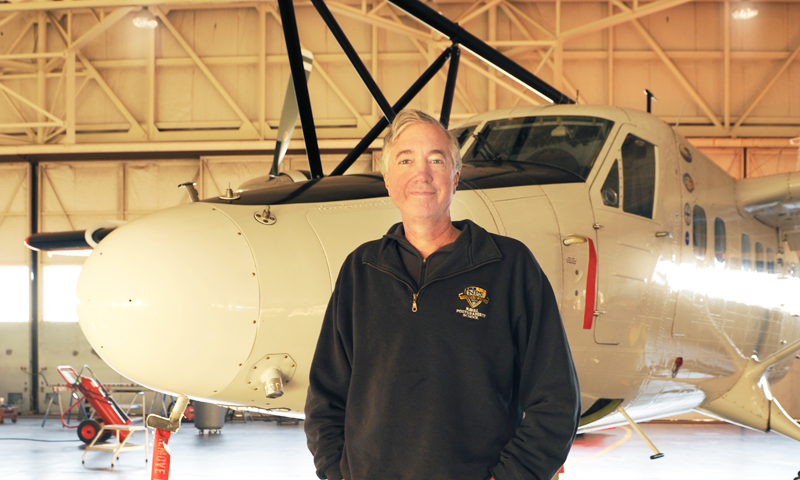 CIRPAS Director Bob Bluth stands in front of the Twin Otter, an aircraft used for gathering meteorological data in the lower troposphere. Bluth and his team will be responsible for overseeing the operations of a newly acquired A-10 Thunderbolt, capable of flying into and gathering data in severe thunderstorms.

Thanks to a dedicated group of scientists and researchers, including several at NPS’ Center for Interdisciplinary Remotely-Piloted Aircraft Studies (CIRPAS) and the National Science Foundation, new technologies will be combined with an old, tried-and-true military aircraft to create the perfect weather-chasing research vessel.

CIRPAS will soon acquire a decommissioned A-10A Thunderbolt, a beastly-looking military aircraft aptly nicknamed the “Warthog,” designed to operate under heavy enemy resistance to deliver missiles and artillery in combat. The heavily-armored plane adeptly maneuvers at low speeds and altitude, and was a critical asset during Operation Desert Storm. Newer versions of the plane have also been used as recently as Operation Iraqi Freedom.

The durability of the craft makes it ideal for flying through dangerous thunderstorms that had previously only been accessible for research using radar equipment on the ground. CIRPAS Director Bob Bluth explained that NPS’ past successes with using a Twin Otter for data collection, paired with the school’s military ties, made the university the top contender for obtaining the plane with funding from the National Science Foundation.

“We’ve done really well with the Twin Otter. We’ve done 15 years worth of missions with it. We’ve got good expertise, and we’re part of the DoD, so we can go into the military inventory and get these kinds of things … the A-10 is just another example of that,” Bluth explained. “We got the A-10 from the Air Force through a concurrent agreement with Naval Air Systems Command and the Air Force. So it will still be an Air Force plane when we operate it, but it will be operated by the Naval Postgraduate School.”

CIRPAS already uses smaller aircraft for weather research, including the Twin Otter used by the center for measurements in the lower troposphere. The advantage of using an aircraft to gather data rather than using a radar system that is most commonly used, Bluth explained, is like the difference between holding a thermometer in the air in your backyard, or sending one up 25,000 ft. into a thunderstorm.

“With the radar down here, everything is remote sensing. So you are basically interpreting what you are seeing. You shoot radio waves out, and then they come back and you interpret the signal that you are receiving,” explained Bluth. “With the A-10, you are making direct in situ measurements. You are going into the weather, with probes on the wings and the nose of the airplane, gathering data.”

Other research institutions also use aircraft – such as the T-28 storm penetrating aircraft operated by the South Dakota School of Mines and Technology (SDSM&T) and retired in 2004 – for getting in-situ data, but none are as equipped as the A-10 to handle severe weather conditions.

“When the science community lost the T-28 storm penetrating aircraft, they identified the Fairchild A-10 as an ideal replacement for it. It extends the range of operation both in terms of distance to reachable storms and in terms of reachable altitude,” explained Research Professor and Principal Investigator for the A-10 project Haflidi Jonsson.“It also is heavily armored and therefore requires minimal additional armoring for hazard protection in storms.  And it has much larger capacity for payload both in terms of available power and in terms of weight.“

Bluth echoed Jonsson’s comments, noting that the T-28 was able to carry 250 lbs. of payload, while the A-10 will allow researchers to carry several thousand pounds worth of equipment, meaning more instrumentation and gear that will not only collect data, but help keep the A-10 protected in extreme conditions.

The craft allows researchers to get closer than ever to the heart of the storm, providing data from an entirely new perspective. The A-10 will be equipped with numerous sensors, from nose to tail, all running autonomously while the pilot navigates through storms. It will also have de-icing systems to prevent ice build-up on the airframe, and a copper-wire mesh strung out over vulnerable parts of the airplane to protect it and the equipment from lightning strikes.

“Since 2004, meteorologists have been lacking capability to obtain in situ measurements inside cumulonimbus clouds and thunderstorms. The only storm-penetrating aircraft available to them was retired then,” said Jonsson. “Much progress has taken place in the development of remote sensors and models that are used to observe and predict storm development.  Both, however, need the in situ data for tuning retrievals and validate results.

“Additionally, atmospheric chemists need to measure quantities of chemical species that are generated by lightning inside storms, or modified by the cloud chemistry,” he continued. “They also want to study the transport of chemicals through the heights of the troposphere and into the stratosphere.  Atmospheric physicists are still working on the causes of cloud electrification and lightning.”

The A-10 being loaned to NPS under funding from the National Science Foundation will undergo extensive renovations and regeneration to make it fit for its new duties. The craft will first be completely renovated to like-new condition in one of two A-10 maintenance centers in the country. It will be extensive refurbished, including new engines and wings, corrosion mediation, even a new paint job. From there, the A-10 will make its way to Oklahoma for testing and ‘weather-proofing.’

One of the biggest challenges that the aircraft will face is the danger that large hailstones pose to vulnerable areas on the plane itself, and the delicate sensors that will be attached to it. While the exterior of the plane is very durable, designed to take hits from 20 mm shells and remain airborne, certain components of the plane, such as the leading edges of the wings, are not as heavily armored. Thicker metal will have to be added to ensure they can withstand a beating in severe thunderstorms, and it will have to be tested as well.

“We are going to build a hail cannon that will shoot a 3½-inch hail stone at about 350 knots, and we will shoot it at various components of the airplane to make sure it can hold up,” explained Bluth. “We will start with parts from an A-10 that we will get from Davis- Monthan Air Force Base from junk airplanes, and we will start by building our own of different thicknesses, and use that as our certification process with the Air Force to be able to show that the modification is sufficient to support the environment that the airplane will be operating in.”

Once operational, the aircraft will be operated in much the same way as other NSF projects, with a panel reviewing research proposals to select the ones to be executed. Bluth expects that the A-10 will be running an average of three missions per year once it becomes operational in the fall of 2013. He hopes to see the A-10 as an opportunity for NPS students and faculty to connect with other universities looking to conduct research with the aircraft.

“It’s a niche field. There are not a lot of people who get into atmospheric science. But for the people that do, everybody will know that this is the place to come,” explained Bluth. “Since we are a University-National Oceanographic Laboratory System facility, we work with a lot of other universities. That gives NPS and the faculty and students at both institutions an opportunity to work together. And there are dozens of universities that we have worked with, providing a national, even international, level of exposure.”