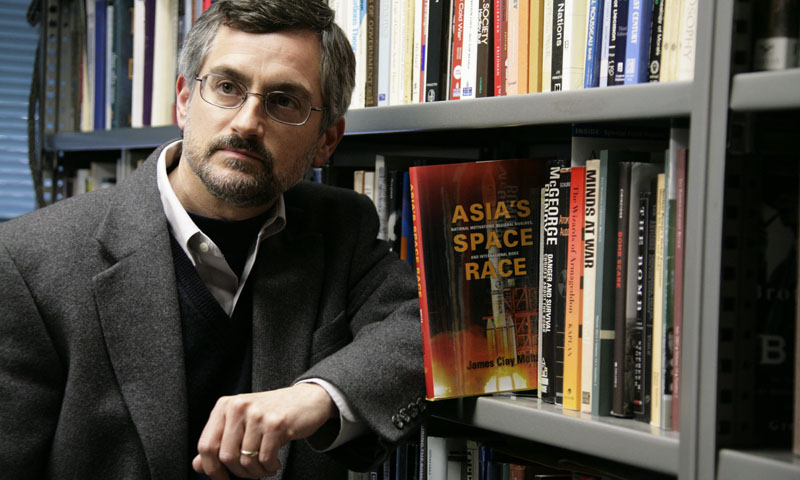 Moltz, former deputy director of the Monterey Institute’s Center for Nonproliferation Studies, became active in space security discussions in 2006 and 2007 as co-coordinator of two conferences on the topic, one in France and the other in Japan. He was surprised by the stark differences between European space programs’ collaborative approach and Asia’s more secretive and competitive policies. He noticed that the topic of space security was one that Asia shied away from talking about, raising a red flag for Moltz.

“Everybody in Europe was speaking about the same types of problems, the same types of approaches, and about how to collaborate,” explained Moltz. “In Asia, the different national representatives did not even seem to be describing the same reality. They had a great deal of mistrust. They were not very transparent about what they were willing to say about their own space programs. And they also did not have any real region-wide emphasis in their space policies. It was all national.

“It was very clear that these countries were simply not comfortable working together in space,” he continued. “Deep-seated historical geopolitical rivalries were a key factor driving their space programs. And if anything, the situation seemed likely to get worse before it was going to get better.”

After Moltz joined NPS in 2007, the NPS Research Initiation Program gave him the funding he needed to travel to Asia for his research. An area of particular concern, addressed in Moltz’s book, is China’s growing interest in a militarized space program. He sees the competitive nature of Asia’s space programs as an understudied problem with potentially dangerous implications.

“Programs that used to be exclusively civilian, including those in Japan and India, have moved in a military direction in the last five years,” said Moltz. “The concern is that their current space race might end up becoming a space arms race.

“This is something that all nations need to be worried about, and the United States, as the country that is most dependent on space, is certainly one that needs to be very wary of what’s going on in Asia today,” he added.

As proof of this shift in Asia’s space endeavors, Moltz points to a longstanding law in Japan that had prohibited military space activities since 1969. That ban was lifted in 2008, following China’s decision to begin weapons testing in space. This concern, and others raised in his book, are addressed by Moltz and his students in his “Space and National Security” course. He is also a frequent lecturer in various classes under the Space Systems Academic Group, where he holds a joint appointment. He notes the value of engaging NPS’ military officers in the technically-oriented curricula in discussions of space security and policies.

“Our students need to understand the international dimension of space activity and where the major Asian space programs are headed,” explained Moltz.

“These developments are emerging factors that the United States needs to consider because they could conceivably put our space assets at risk,” he added. “Any conflict, even between regional powers, could result in the release of large amounts of orbital debris which would be very harmful for everyone in space.“

But Moltz also sees prospects for positive U.S. engagement with Asian countries to encourage responsible behavior and reduce tensions. He cites the 2011 National Security Space Strategy as leading the way to greater cooperation with U.S. allies in Asia.

Moltz’s conclusion also includes ideas for opening channels of communication with possible adversaries, including China, given the need for a basic level of collaboration in such problems as collision avoidance and enhanced debris mitigation. He says that a military-to-military dialogue on space security with China might be a useful step, just as such discussions with the Soviet Union helped prevent conflicts in space during the Cold War.