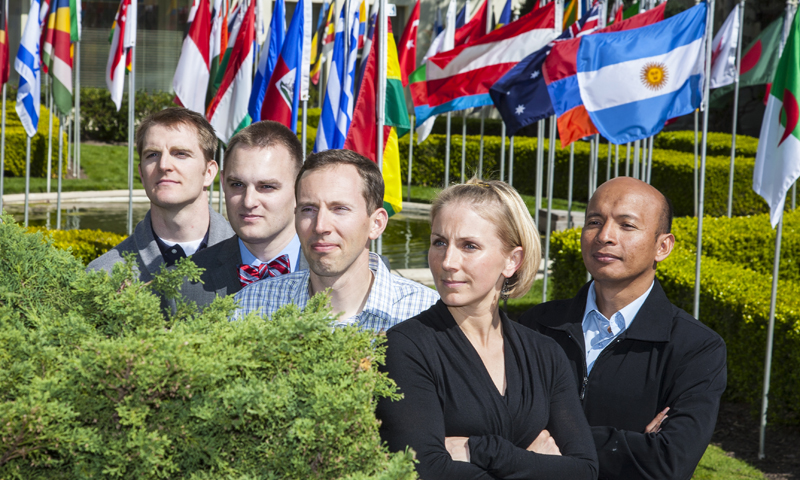 The first cohort of Strategic Studies students are pictured in the NPS Flag Garden, March 9. After a long hiatus following the Cold War, the Navy has once again turned to NPS to educate board-selected officers to receive the 2301P Naval Strategist performance code.

After a long hiatus following the cold war, the Navy has once again turned to NPS to educate Naval strategists. NPS curriculum 688, Strategic Studies, will now train board-selected officers to receive the 2301P performance code.

“The Navy has P-coded billets for O5s and O6s designed to give these folks insight into how strategy is made so that when these folks are running the Navy, or advising our civilian leaders, they will be qualified to contribute to the discussion,” said NPS School of International Graduate Studies (SIGS) Dean Dr. Jim Wirtz. “It is really designed to give people something more than just operational experience.”

NPS alumnus Rear Adm. Michael Smith, who currently serves as the president of the Navy’s Board of Inspection and Survey, was instrumental in bringing Navy strategists back to NPS.

“The problem in the Navy today is that everyone thinks that they are strategists, but they really aren’t. They have just been introduced to strategic thinking,” he said.

Smith came to this realization after serving tours as part of the ‘Council of Colonels,’ a think tank of sorts that advised the Joint Chiefs of Staff on strategy in Iraq, and through follow-on assignments that required ever increasing levels of strategic acumen. After learning first-hand about how strategic decisions are made at the highest levels of government, Smith became determined to help the Navy to prepare officers for future, strategy-laden assignments.

We had to create an enterprise where everyone comes in and leverages the service academy, War College and NPS to develop the strategic tools we need to support the CNO [Chief of Naval Operations],” said Smith.

“We created a strategy sub-specialty that would re-invigorate the [curriculum at the] postgraduate school and bring in mid-level officers for graduate education,” Smith continued. “I was able to do this by working through personnel to create a cost-neutral program. The pieces were already there … NPS had the talent and the ability to put them altogether.”

Smith worked closely with Wirtz to develop the program. According to Wirtz, NPS once had a vibrant strategic studies curriculum, but as the Navy’s mission changed, so too did the Navy’s need for high-level strategists.

“We had a strategic planning curriculum in the ‘90s that focused on nuclear weapons and arms control,” said Wirtz.

But in 1991, the Navy rid itself of its at-sea nuclear arsenal leading to a decreased interest in the strategic studies curriculum at NPS. In 2000, the curriculum was discontinued altogether. This, Wirtz says, was a mistake, noting that strategy is about more than just nuclear deterrence or the use of force.

“Strategy is about using force, and other national assets, to alter the political actions of your opponents,” said Wirtz. “We have gotten away from that. We have not been thinking about how we can use force to influence politics, instead, all the focus [in recent years] has been on operations.

“But the Navy has come to the realization that it needs people capable of looking at the big picture, and able to contribute to the national strategic environment,” continued Wirtz. “We need people who understand how the Navy is going to use strategy to alter our enemies’ goals.”

Lt. Jason Rogge is one of the new strategic studies students attending NPS.

“I am looking long-term at some of the things that this education can bring to the table,” he said. “I think that it’s important for us, as essentially civil servants, to have an understanding of how foreign policy is formed inside the beltway.

“My hope is that the Navy continues to support the program and keeps it alive, the Navy really needs people that are able to deal with these issues. As we go forth and interact with different nations, these are things that we will need to know. NPS is a great place to get this knowledge,” he continued.

If all goes according to plan, Rogge may get his wish. Smith’s vision for strategic studies is more than an academic exercise.

“We have to be able to promote a cadre of experienced strategists … to be able to clearly groom and educate people, and to qualify them to be able to contribute to strategy-making decisions,” said Smith. “We hope to get them a degree, followed by an experience tour … and guide them so that by the time they become O6s, they are strategy experts.”

The initial group of mid-level officers are already on the ground at NPS, and according to Smith, they will not have any difficulty finding commands that value their strategic education.

“We have more billets where four-stars [admirals] want strategists than the Navy communities can provide,” said Smith. “There is a huge demand for this.”