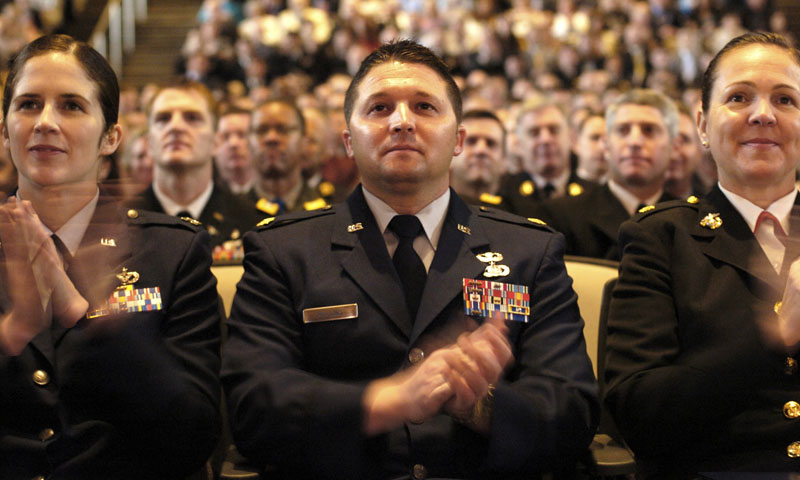 U.S. Air Force Maj. Creighton Mullins, center, is pictured during the Winter Quarter Commencement Ceremony in King Auditorium, March 27. Mullins has been selected to receive the prestigious Ellis Island Medal of Honor by the National Ethnic Coalition of Organizations (NECO) during a ceremony this May.

Recent Naval Postgraduate School (NPS) alumnus U.S. Air Force Maj. Creighton Mullins of River Ridge, Louisiana was named a recipient of the Ellis Island Medal of Honor by the National Ethnic Coalition of Organizations (NECO), March 25. The prestigious medal, which honors the contributions made by both immigrants and their descendants, will be presented to Mullins during a ceremony at Ellis Island in May.

“I am deeply humbled, almost to the point of embarrassment, that I was nominated and selected to receive this award,” said Mullins.

Mullins was quick to acknowledge the combined efforts that led to his accomplishments and expressed particular gratitude to his family for their support throughout his multiple deployments and absences from home.

“It was an honor to be nominated for this award, but I have always been a part of a team, and my accomplishments are a reflection of the many men and women with whom I served, and nothing would have been possible without my wife’s unwavering love and support,” said Mullins.

“Here at NPS, I was able to build upon my previous work in the field,” said Mullins. “I was able to synch my academic work with my operational experiences and to study under professors whose work I had read prior to deploying. I tried not to waste a second. “Having had the opportunity to learn from experts in the field and to study the relevant theoretical frameworks and paradigms has been worth its weight in gold,” Mullins continued. “I gained a greater appreciation of the many complexities in the Middle East. I am now more determined than ever to continue my studies and to apply them to current regional challenges.”

U.S. Army retired Lt. Gen. Michael T. Flynn nominated Mullins for the award. According to Flynn, much of what Mullins did to be nominated is, and will likely remain, classified top secret. But Flynn was able to speak in broad terms about Mullins’ many accomplishments.

“The medal has been given to six U.S. presidents. Young people don’t usually get it, the fact that he did, is a testament to the kind of leader he is,” said Flynn. “[Mullins] worked for me during the height of the Iraq war and throughout the Middle East fighting terrorists.

“He was the most innovative, mature, and courageous officer that I have worked with. He was willing to dare when nobody else would, and though his actions will never be written about in a book, they likely saved thousands of U.S. and Iraqi lives and led to the death or capture of many enemies of the U.S. and the free world,” Flynn continued.

The NECO program was not the only organization to recognize Mullins’ work. He was also awarded NSA’s Outstanding Thesis and Distinguished Graduate awards, as well as the NPS Superior Service and Liskin awards in recognition of his academic accomplishments while at NPS.

Ellis Island Medals of Honor are presented to some 100 awardees each year during a ceremony held in Ellis Island’s Great Hall – the same hall that immigrants traversed for decades on their way to the U.S. In 2012, former NPS Executive Vice President and Provost Dr. Leonard Ferrari and Chair for Systemic Strategy and Complexity, Navy Capt. Wayne Porter, were both honored with Ellis Island Medals of Honor. According to NECO, other past medalists include former heads of state, Nobel Prize winners, and leaders of industry, education, the arts and sports.