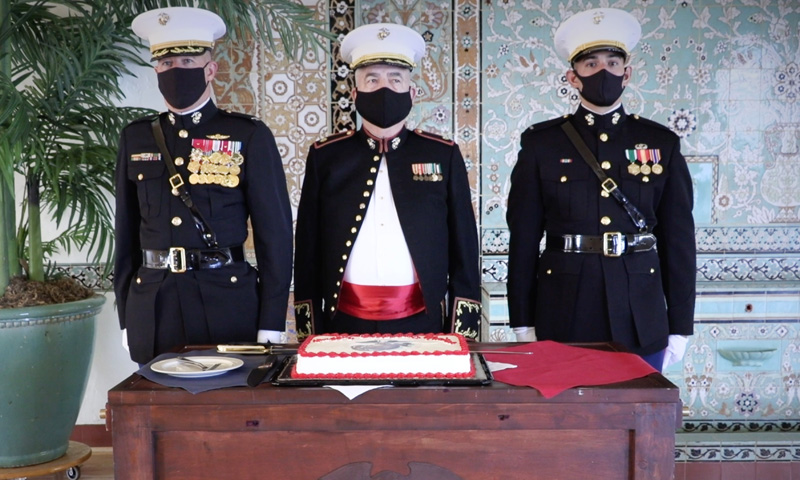 Good morning Naval Postgraduate School!  Please join me in a birthday salute to the United States Marine Corps on the occasion of their 245th anniversary, and a salute to all veterans as we prepare for Veterans Day tomorrow.

If you are not aware, it was on November 10, 1775 that the Second Continental Congress passed a resolution stating that “two battalions of Marines be raised” for service as landing forces with the newly formed Continental Navy.  Shortly afterward, Captain Samuel Nicholas’ recruited and trained 300 Marines, embarked his newly formed battalion on ships, and went to sea.  In January 1776, under the command of Commodore Esek Hopkins, these first Marines conducted an amphibious landing at the Battle of Nassau in the Bahamas and began a 245-year legacy of military excellence.

Every year on November 10th, Marines around the world gather to celebrate the birth of the Corps.  The most recognizable are the large galas featuring distinguished guests, formal uniforms, cakes cut with swords, speeches, bands, and dancing.  Less known are the thousands of smaller celebrations.  Whether two Lance Corporals standing a post at a Forward Operating Base celebrating their first Marine Corps birthday by reading General Lejeune’s message under a red-lens flashlight and then splitting a maple nut cake from a Meal Ready to Eat; or a few former Marines at the VF sharing memories of Marine Corps birthdays in Korea or Vietnam, regardless of circumstances, wherever on earth you find two or more Marines, the birthday will be celebrated.  In fact, Colonel (Retired) Randy Bresnik once celebrated the Marine Corps birthday from the International Space Station.

Unfortunately, COVID-19 prevents a Naval Postgraduate School Marine Corps Birthday Ball this year.  Instead, all over the Monterey peninsula tonight, you will find small groups of NPS Marines gathering in front yards or dialing up fellow Marines around the world, to enjoy one another’s company, to share sea stories, and to celebrate long line of illustrious men and women who have served as “Soldiers of the Sea” since the founding of the Corps.

I encourage you to watch this feature video produced by the NPS Marines and NPS PAO to join me in wishing the Marine Corps and all Marines—current, former, and their families—a happy 245th birthday.

On Wednesday, we honor all who served our country in uniform. Veterans Day was originally observed as “Armistice Day” commemorating the date of November 11, 1918. On this date, the major hostilities of World War I were formally ended at the 11th hour of the 11th day of the 11th month of 1918, when the Armistice with Germany went into effect. Congress passed a resolution in 1926 for an annual observance, and November 11 became a national holiday beginning in 1938. There are currently more than 16 million living veterans in the United States who have served in at least one war.

Throughout our nation’s history, military service members have answered the call to defend American freedom and liberty, and to preserve it or deliver it to other nations. They have put on their uniforms to bravely protect the values and liberties through which this nation was created and built upon. For many veterans, the service hasn’t stopped after taking off the uniform. Veterans take the experiences they’ve gained from serving the nation and devote themselves to strengthening our communities. Many have become our nation’s leaders, scientists, researchers, entrepreneurs, and volunteers within our communities.

To all our veterans—including international students and faculty who have served with us as allies or coalition partners—thank you. Thank you for everything you have done in support of our national security and in the name of freedom. You are among the best our nations have to offer.

Blessings to you and your families—Happy Birthday Marines and Veterans Day greetings and respect to all who are and who have supported our veterans!