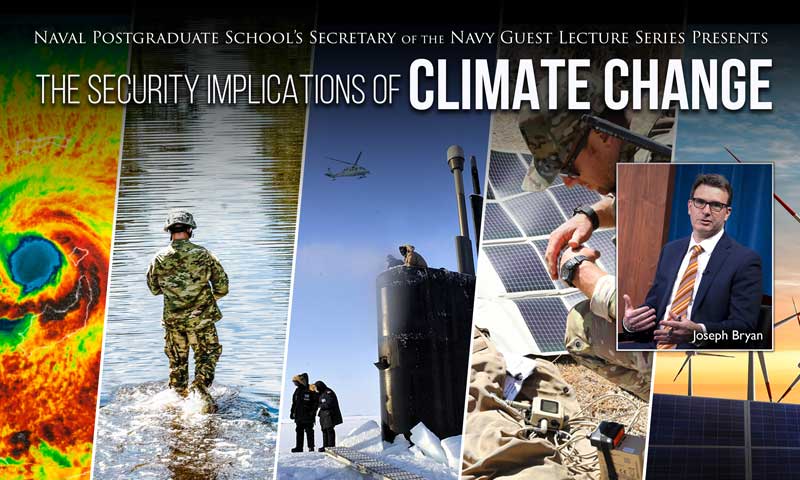 Mr. Joseph Bryan, Senior Advisor on Climate to the U.S. Secretary of Defense spoke virtually to Naval Postgraduate School (NPS) students, faculty and staff about “The Security Implications of Climate Change,” and how the United States military and the world can benefit from reducing carbon emissions during the latest Secretary of the Navy Guest Lecture (SGL), April 27.

Bryan is an internationally-recognized expert on energy policy and clean energy, serving as Deputy Assistant Secretary of the Navy for Energy during the Obama Administration.

Quoting Secretary of Defense Lloyd Austin, Byran began the lecture by saying, “There is little about what the Department [of Defense] does to defend the American people that is not affected by climate change.”

“That couldn’t be more true,” he said. “Climate change has an impact on the DOD in terms of supply and demand, and climate is driving both of these lines in the wrong direction. Mission demands from climate are going up, and more severe weather impacts our ability to respond.”

Bryan named a few examples of how mission demand will increase, pointing to incidents around the world that are affected by climate change and have a direct impact on the Unites States military. He mentioned how the Arctic is warming at twice the rate of the rest of the planet, causing multiple countries to compete for newly-available resources and influence. He spoke about how warmer temperatures and drought in the Middle East contribute to instability and challenge for local governments.

He talked about how hurricanes, wildfires, power outages and extreme temperatures in regions where U.S. forces conduct training all directly impact the ability for the U.S. to effectively prepare and conduct missions. He also talked about vulnerabilities caused by dependence on energy sources whose production is dominated by peer adversaries. Lithium ion batteries, for example, are used in countless systems used by the U.S. military. China’s dominance in the supply chain of these batteries, from mining through production, is a serious vulnerability, he explained.

“It is important for us to look at not only the effects that climate change has on the world, but the impact it has on the mission,” Bryan stressed. “Because they are inextricably linked.”

After his prepared remarks, Bryan opened the floor to NPS students, posing questions on everything from the DOD’s plans to reduce its carbon footprint, to the short- and long-term effects of a successful transition to clean energy.

Bryan replied, “This is not a problem the United States can solve on its own, and so we need to work with the world community to address carbon reductions to transform our economies. I think there's going to be tremendous international cooperation required.”

U.S. Navy Lt. Cmdr. Kellen Jones, a Ph.D. candidate in Meteorology, asked, “Does the DOD plan to invest in research and development for alternative carbon-neutral fuels?”