NPS Researchers Dive Into the Gray Zone of Sexual Harassment

NPS Researchers Dive Into the Gray Zone of Sexual Harassment 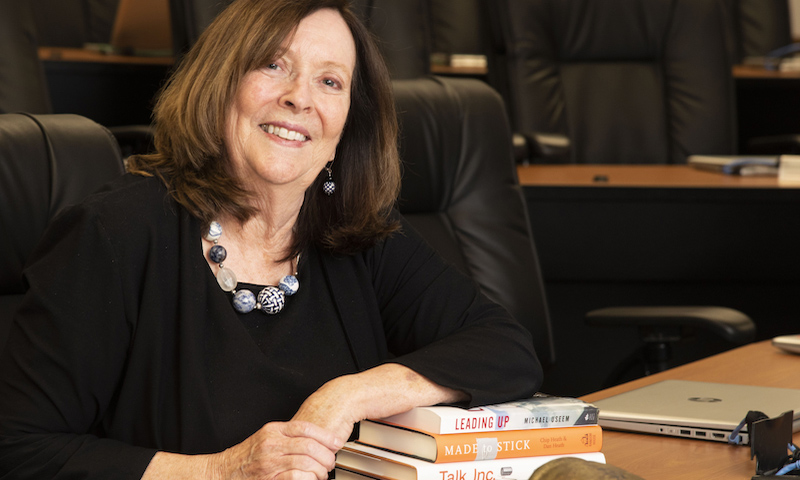 Strategic communication expert Dr. Gail Thomas has been a critical resource for Navy leaders in researching all aspects of sexual harassment and prevention … Her latest effort explores the complexities of gray-zone behaviors that can often challenge the relationships between Sailors and their first-line supervisors.

Imagine the following hypothetical …  You’re a Lead Petty Officer (LPO) on your second year in that leadership role. While lining up for a periodic uniform inspection, you see your new colleague lean over to a younger, female subordinate and say, “Wow, I love your new haircut,” with a subtle wink.

Seems wrong, unprofessional probably, but less than a blatantly overt act of impropriety. What should you do as one of the leaders of the team?

This hypothetical example is one of many scenarios from a Situational Judgement Test (SJT) compiled by a team of Naval Postgraduate School (NPS) researchers as an innovative way to take on sexual misconduct and discrimination in the military. As most service members know, these issues can be one of the most destructive forces against unit cohesion.

In targeting “Gray-Zone Behavior” – behavior which falls short of the technical definition of harassment, but most certainly isn’t entirely above board – SJTs afford an opportunity to assess and develop healthy workplace environments, according to the principal investigator Dr. Gail Thomas, an associate professor in NPS’ Graduate School of Defense Management (GSDM).

“Many academic studies address sexual assault and sexual harassment in the military, but few address the ambiguous behaviors that often precede harassment,” she noted. “What makes this idea so compelling is that instead of looking at incidents after the fact, we are focusing on the ‘P’ of Sexual Assault Prevention and Response (SAPR) … Looking to get in front of potential incidents before they happen.”

The Department of the Navy's Sexual Assault Prevention and Response Office (SAPRO) approached NPS in 2018 with the idea of exploring these Gray Zone Behaviors, with Thomas zeroing in on the relationship that dominates across the service … Sailors and their first-line supervisors.

“The people who have the most influence on their employees are their first-line supervisors,” she said. “They’re the ones who are giving Sailors their fitness reports and who actually establish the immediate work climate.”

We’ve found that first-line supervisors often do one of two things when encountering an ambiguous situation, she said. Either they avoid it because they’re not sure what to do, or they escalate it up the chain of command because they’re afraid it could get them in trouble later.

“Sometimes, neither of these is a good choice, but where is the in-between?” Thomas asked. “That’s where SJTs come in, by helping provide standards and norms for interacting with each other in a professional, healthy working environment.”

To design the research study, the NPS team conducted in-depth interviews with 63 junior enlisted sailors and officers to collect more than 200 examples of ‘iffy’ situations from their experiences. The team then used these to create contextual, scenario-driven SJTs which could identify knowledge gaps along four professional attributes: organizational justice, propensity for action, perspective taking and respectful interpersonal communication.

SJTs were then developed for first-line supervisors providing 24 different situations and responses to test each of the four professional attributes. Additionally, the team created a parallel test where they swapped genders for each of the scenarios.

“Sometimes it feels that the Navy focuses mostly on women as potential targets for inappropriate language or behavior, but men are also often targets for something inappropriate. We are trying to give that balanced attention,” explained team data analyst Deborah Gibbons, NPS GSDM associate professor of management.

For an initial study, the NPS team administered SJTs to approximately 200 junior sailors and officers in two iterations where their responses were analyzed and the results validated. Thomas then presented this research to the Navy in Fall 2019.

Not only did the research identify shortfalls in knowing how best to deal with gray zone behaviors among the responders, but it also served to coach participants towards better dealing with them through discerning between what they would do and what they should do.

“This study is important as a foundation for action,” Gibbons explained “Rather than a lot of regulation, what we’re aiming for is identifying the skill set that’s needed for people who day-to-day have the opportunity to intervene in a positive and effective way before there’s a crisis.”

“Just the fact that we get people to think about social situations that could hit them in the face later will make them better prepared to deal with them,” she continued. “We are really looking at that fuzzy zone where understanding your social environment plays a crucial part of what your role as first-line supervisor should be, and what the appropriate intervention is. If you’ve been able to think through possible situations you might face, you’re better able to be morally courageous in the future.”

The hope, Thomas and Gibbons noted, is that first-line supervisors learn to better deal with gray-zone behaviors as they mature in their careers.  Ultimately this should yield a healthier work climate throughout the Fleet.

“I would be very sad if we triggered another ‘box check’ training requirement because what we really need is thoughtful coaching for people who are moving into leadership positions to be quicker on their feet to address social issues that are in this gray area,” Gibbons said.

“NPS has the background and ability to bring science into an arena that is often driven by opinion and emotions,” she continued. “The idea is that evidence will guide decision-making in the future, evidence of what works and what doesn’t.”

The NPS team has received overwhelming positive feedback on their research.

“Dr. Thomas and the Naval Postgraduate School research team has performed a novel application of SJTs to the topic of Sexual Harassment,” said Cmdr. Leedjia Svec, a former SAPR Officer with the Department of the Navy’s SAPRO. “This research addresses multiple areas of this challenging problem. The most exciting discovery from this research is the affirmation that leaders can be trained in the nuanced behaviors they need to stop sexual harassment from occurring.”

It’s all about creating a better work environment for Sailors, Marines and civilians, she stressed, and the research provided is part of that. “NPS went above and beyond our expectations,” she said.

Looking ahead to FY21, Thomas and her research team will continue their efforts by providing assistance to Navy and Marine Corps commands as they work to implement the SJTs. Learn more about Dr. Thomas’ research during her Listen, Learn, Lead interview with NPS President retired Vice Adm. Ann Rondeau.