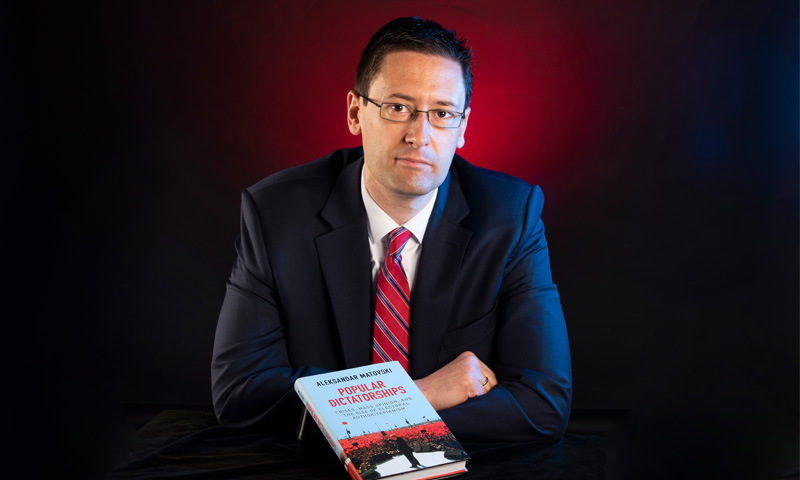 Aleksandar Matovski, an assistant professor in NPS’ Department of National Security Affairs, examines the rise and dynamics of electoral autocracies, regimes that come to power through democratic institutions only to rule as dictatorships, in his recent book, “Popular Dictatorships: Crises, Mass Opinion, and the Rise of Electoral Authoritarianism.”

Russia’s invasion of Ukraine left many Western analysts confounded. From a foreign policy perspective, it simply did not make any sense. Even if its “special military operation” proved fully successful, Russia still had more to lose than gain: NATO would draw closer to its borders, the West would impose crippling sanctions, and Ukraine itself would be irredeemably lost from Russian influence.

The key to understanding why Putin invaded Ukraine does not necessarily lie in its foreign policy, but rather in its domestic politics, according to Aleksandar Matovski, assistant professor in the Department of National Security Affairs at the Naval Postgraduate School (NPS) and Associate at the Davis Center for Russian and Eurasian Studies at Harvard University.

“Most importantly, the share of Russians who wanted Putin to leave office after the end of his current term was trending to surpass those that wanted him to stay,” he explained. “As Putin faced the 2024 election … [And] because constitutional changes had effectively abolished term limits for him, the population was exhibiting very clear signs of ‘strongman fatigue.’”

“Against this backdrop, Putin had very few options to try and resurrect his appeal except by starting another conflict,” he added.

In his new book, “Popular Dictatorships: Crises, Mass Opinion, and the Rise of Electoral Authoritarianism” (Cambridge University Press, November 2021), Matovski critically examines the rise and dynamics of regimes like Putin’s Russia, electoral autocracies that adopt the veneer of democratic institutions only to subvert them to effectively rule as dictatorships.

Rising to power in times of deep socio-economic tension, autocrats promise strong, decisive leadership to provide the stability their country needs. Their mass appeal - not repression, brainwashing or bribery - accounts for their success at the ballot box.

“Quite simply, strongman rule is a very attractive remedy for societies gripped by turmoil,” Matovski said. “Majorities desperate for stability yearn for firm-hand leadership, which will overcome institutional paralysis, wipe out corrupt elites and special interests, and bring order and justice.”

Their growth since the end of the Cold War has been meteoric.

Fully one-third of the nations of the world today have been consistently run by electoral autocracies, including countries as geopolitically significant as Russia, Egypt, Venezuela, Turkey, Pakistan, Malaysia and Nigeria, Matovski noted.

“By mimicking democracy – allowing multiparty elections, oppositions and somewhat free markets and media – they quite literally kept authoritarianism alive in most places across the world, effectively extending the average life of dictatorships to over 20 years,” he said. “And they turned out to be the most effective way to subvert existing democracies.”

“The most ominous feature of electoral autocracy is that they allow authoritarian incumbents to demolish democracy from within: to ‘weaponize’ their popular support, hollow out institutions and divide societies far more effectively than through blunt repression.”

This threat to democracy also presents a clear and present danger to global peace and stability.

With their power dependent on fear of crises, “strongmen” begin to lose their mass appeal both if they fail and - paradoxically - if they succeed in stabilizing their countries.

“Why would people tolerate the restrictions and unwholesome nature of authoritarian rule if their countries were stable and there was no need for strongmen to protect them against danger and dysfunction?” Matovski said. “To survive, electoral autocracies must maintain - or manufacture - the cries and conflicts that legitimize their rule.”

Vladimir Putin, who came to power with the promise to “raise Russia from its knees” following the turbulence of the post-Soviet 1990s, faced his first serious challenge by popular revolt in 2011-12 when he insisted on staying in power despite having stabilized the country.

To remedy this, he orchestrated the annexation of Crimea and the conflict in the Donbass - framing both as part of an existential conflict with the West - to resuscitate his image as Russia’s indispensable strongman and to demobilize domestic opposition to his rule, Matovski said.

“Other electoral autocracies have mastered the use of brutal anti-insurgency, anti-terror, anti-crime and anti-immigration campaigns to sustain a sense of persistent threat that justifies their rule,” he continued. “Still others, like Venezuela’s Chávez and Turkey’s Erdoğan, have staged diplomatic spats and disputes – often aimed against more powerful countries – to bolster their strongman credentials.”

“The tactics differ, but the overall pattern is very clear: electoral autocracies sustain their appeal by generating conflict and discord at home and abroad,” Matovski said.

For Matovski, the drive to understand the threat of electoral autocracies is as personal as it is academic.

Growing up in the former Yugoslavia, he had a front-row seat to the emergence of key trend-setting electoral autocracies after the Cold War, including the rise and fall of the Serbia’s regime under Slobodan Milošević.

“What struck me the most throughout my entire trajectory of living and working in close proximity to electoral authoritarianism as a student, researcher, government official and scholar, is how poorly understood these regimes were,” Matovski said. “Western policymakers and commentators consistently misjudged and mispredicted the motives and behavior of electoral dictators, and there are huge gaps in the scholarship on these regimes.”

“The most underappreciated aspect of electoral authoritarianism – and the key inspiration for my book – was how much these autocracies depended on popular consent to their rule,” he continued. “Operating under the tacit assumption that ordinary people can only be brainwashed, repressed or bribed into supporting autocracy, we have collectively failed to realize that elected dictators are primarily sustained by their genuine strongman appeal, which allows them to attract mass support, and divide their opponents. In ‘Popular Dictatorships,’ I argue that sustaining this appeal is the main imperative of electoral autocracies, and the key driver of their behavior – particularly their aggressive behavior at home and abroad.”

Thus it is that in February 2022, with Russia’s swiftly approaching 2024 elections and a rapidly evaporating popularity, Putin decided to invade Ukraine, Matovski says.

However, the failure of his initial blitzkrieg and subsequent bloody quagmire with mounting casualties have put him in a desperate position, Matovski noted.

“We have a strongman ruler who controls the world’s largest nuclear arsenal and cannot safely retire fighting for his survival in Ukraine,” he said. “Though much weaker than the Soviet Union, electoral authoritarian Russia under Putin has, in many ways, become more dangerous.”