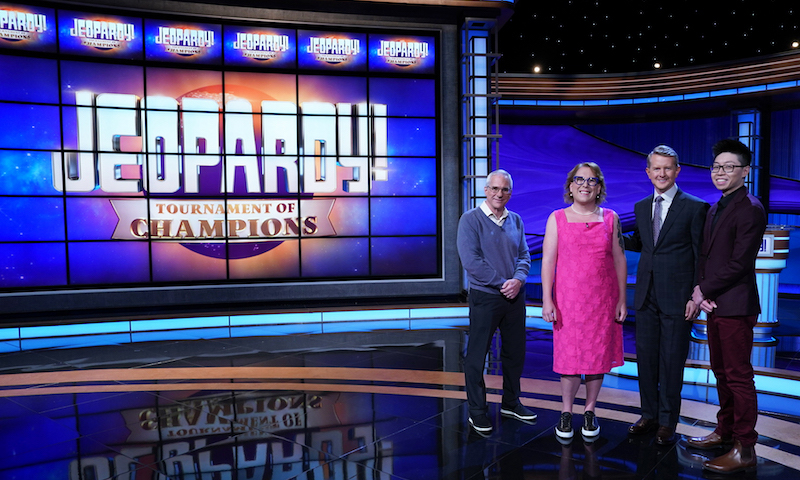 For the second year in a row, Dr. Sam Buttrey treated his colleagues and students at the Naval Postgraduate School (NPS) to another amazing tournament run on the hit TV quiz show “Jeopardy!”

Buttrey’s winning streak – which began during last year’s “Jeopardy!” Professors Tournament – finally came to an end in the show’s prestigious Tournament of Champions, which was recorded in Los Angeles earlier this fall and televised, Oct. 31 - Nov. 21.

But the associate professor in NPS’ Operations Research department, who finished third overall behind TOC champion Amy Schneider in the tournament finals, had no regrets about his performance on the Alex Trebek Stage.

“Honestly, I think I would have been pretty satisfied if I’d won just the first game, but of course I’m excited to have made it to the finals,” said Buttrey, who joined friends and colleagues on campus Nov. 16 and 18 to watch two of his games – including his lone win in the TOC finals. “This most recent tournament was a special delight because I had watched the other competitors play. So it was neat to go up against them and see how I could do.”

Buttrey earned a $50,000 prize for his third-place finish in the Tournament of Champions, hosted by former “Jeopardy!” champion Ken Jennings. Schneider, from Oakland, Calif., won the tournament’s grand prize of $250,000, while Andrew He of San Francisco earned $100,000 for finishing second.

“All of us at NPS are tremendously proud of Sam for winning the inaugural ‘Jeopardy!’ Professors Tournament last year and for his deep run this year into the finals of the Tournament of Champions,” said NPS President, retired Vice Adm. Ann Rondeau. “Sam’s colleagues and students know his wit and intellect first-hand, and I think his uplifting spirit came through on the show, amassing many fans across the country to cheer him on with us. Sam’s success reflects his – and all of our faculty and staff’s – deep dedication and service to our men and women in uniform studying here at NPS, preparing them as warrior-scholars to go back to the fleet and joint force to lead and make a difference in the defense of our nation.”

Buttrey had qualified for the Tournament of Champions thanks to his win in the 2021 Professors Tournament, which aired last December. During his run, Buttrey quickly gained a national following due to his uncanny resemblance to comedian Steve Martin, not to mention his sharp, self-deprecating wit.

What’s more, after winning the Professors Tournament, Buttrey and his wife chose to start a scholarship endowment at California State University, Monterey Bay, with more than half of his $100,000 winnings.

It seemed like a good idea to use the money to foster education, and we liked the idea of operating locally,” said Buttrey.

In addition to Buttrey, the Tournament of Champions field of 21 included five “super-champions” (10 wins or more), all contestants with four or more wins since 2020, the winner of the National College Championship tournament, and two “Second Chance” qualifiers.

Just as he did the year before, Buttrey advanced to the TOC finals with strong performances in the first two rounds. In the semifinals, Buttrey scored an upset victory over “super-champion” Matt Amodio, who owns the third-longest winning streak (38 games) in “Jeopardy!” history behind Jennings and Schneider.

“You have to be intimidated when you play someone like Matt or Amy, but at the same time we all know that there’s a lot of game-to-game variability – that is, there’s luck in the questions, the locations of the daily doubles, and just how you’re working the buzzer that day,” Buttrey said.

With the tournament over, Buttrey is now back at work, preparing for finals and graduation before the holidays. He’s thankful for his experience on “Jeopardy!” – although he confessed that he still hasn’t heard from a certain comedian.

“I haven’t heard from Steve Martin, and at this point I don’t really expect to, but I hope he’d be as amused as I am by the reactions of all the people noticing a certain similarity,” Buttrey said. “And I’m glad that I was able to give off an exuberant vibe in the middle of this fairly stressful situation. I think people reacted to seeing me having fun, and I’m happy for that.”