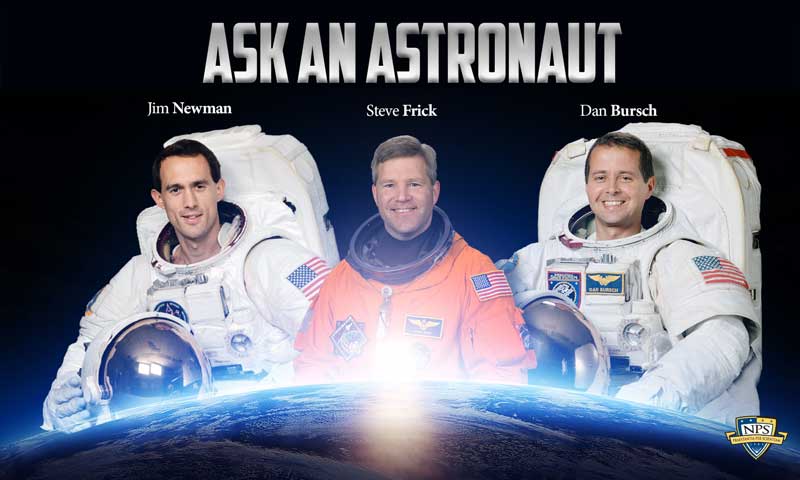 In honor of Month of the Military Child, the Naval Postgraduate School (NPS) hosted “Ask an Astronaut” giving the children of Monterey County service members an opportunity to pose questions to a panel of three former NASA astronauts, broadcast via live stream, Apr. 29.

While the event was based out of Monterey, Calif., the virtual STEM-centric event reached as far as the East Coast with a question sent in from a classroom in North Carolina. Questions from the children ranged from what their favorite memory of space, to how do you eat and sleep in space, and to what it takes to become an astronaut.

“I always enjoy the questions about adapting to micro-gravity, like how we swallow without gravity,” said Newman, Chair of the Space Systems Academic Group. “Children are naturally curious about the world they live in so it’s important to let them know, at an early age, that STEM [Science, Technology, Engineering and Mathematics] is something that is accessible to them and can help them discover more about the world.”

According to the event’s moderator, Navy Capt. Edward McCabe, NPS Air Warfare Chair, STEM education is critical for the future and we need many of our youth to pursue these fields.

“Our future depends upon our children building the skills necessary to create and invent, and STEM learning is the key,” said McCabe. “Getting them excited about STEM, and keeping them excited is critical for the nation, and events like this one hopefully do that.

“Seeing the event reach so many was very encouraging and indicative of the renewed excitement for the space program,” continued McCabe. “Maintaining a positive relationship with the local population is vital and events such as these that provide that sense of community and encourage the continuing education of the next generation reinforce and strengthen those local bonds.”

Dr. Cheryl McCloud, NPS’ School Liaison Officer, noted that the event offered the children a glimpse into something they can achieve, following the expression, “If you can see it, you can be it.”

“I appreciated the opportunity to include so many students, it confirms that the earlier students are exposed to STEM, the more likely they are to also spark a lifetime interest in science,” said McCloud. “When NPS hosts events, it makes us accessible to students who would not otherwise have that exposure or access and it offers the wider audience an opportunity to get a glimpse into what is possible.”

To that point, Newman also noted, “Involving the community helps showcase what NPS is all about – education and research,” said Newman. “Part of being a good neighbor involves communicating purpose and possibilities.”

During the event, Frick reminisced about his space missions, and would certainly be watching new generations of astronauts who will get the chance to explore space.

Events like Ask an Astronaut look to inspire children and show them the possibilities that are in front of them in and as well as show our appreciation for their sacrifices as the child of a service member.

“I need to thank those military kids watching today,” said McCabe. “Being a child of a service member is hard work. Your sacrifice is critical to enabling the service of your parent and the security of the nation. For that, we are grateful.”

At the event’s conclusion, NPS remembered the life of legendary astronaut U.S. Air Force retired Maj. Gen Michael Collins, who passed Apr. 28 at the age of 90.

“He looked down on all of us from the furthest point man had yet traveled and he now looks down on us from the heavens,” said McCabe. “Rest in peace knowing that we stand the watch, and the future is in good hands with the next generation inspired by your accomplishments.”