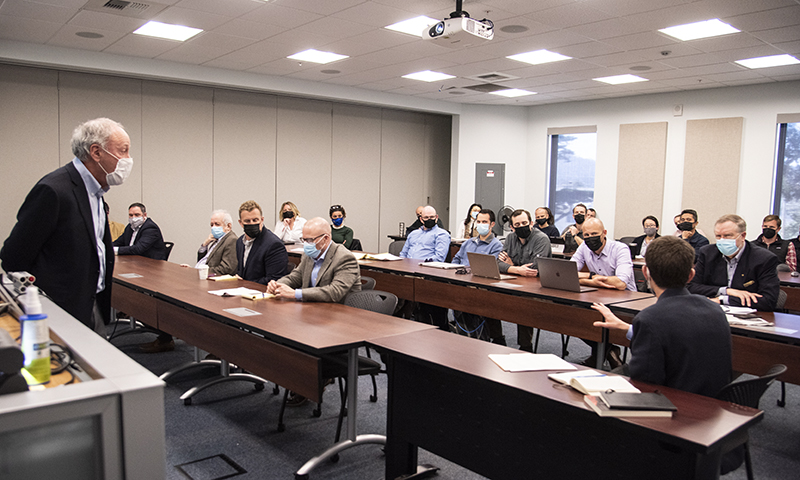 Nobel Laureate Roger Myerson offers an informal guest lecture to NPS students and faculty in the Defense Analysis (DA) department, Feb. 28. Myerson spoke of his research in game theory and its application to conflict studies, as well as NPS research in statebuilding and stabilization studies.

Myerson spoke of his research in game theory and its application to conflict studies, with a distinct focus on the current conflict in Eastern Europe, as well as its global, economic and political implications. He also expressed a keen interest in NPS faculty research in the areas of statebuilding and stabilization studies. Myerson was invited to the university by Dr. Carter Malkasian, who joined NPS as Defense Analysis chair in late 2021.

During his lecture, the Nobel Laureate drew on insights from his experience as a game theorist to describe how the U.S. should think about deterrence in the current conflict, and the importance of local accountability in a robust democracy. He continued on to say, in his opinion, it is dangerous to appease an adversary’s demands, and re-enforced the critical role of trust across partner nations.

Myerson is the David L. Pearson Distinguished Service Professor of Global Conflict Studies in the Harris School of Public Policy and the Griffin Department of Economics at the University of Chicago. He has made seminal contributions to the fields of economics and political science, and in game theory, introduced refinements of Nash's equilibrium concept.

He is the author of Game Theory: Analysis of Conflict (1991) and Probability Models for Economic Decisions (2005), and is a member of the American Academy of Arts and Sciences, the National Academy of Sciences, the American Philosophical Society, and the Council on Foreign Relations. He was awarded the 2007 Nobel Memorial Prize in Economic Sciences in recognition of his contributions to mechanism design theory, which analyzes rules for coordinating economic agents efficiently when they have different information and difficulty trusting each other.