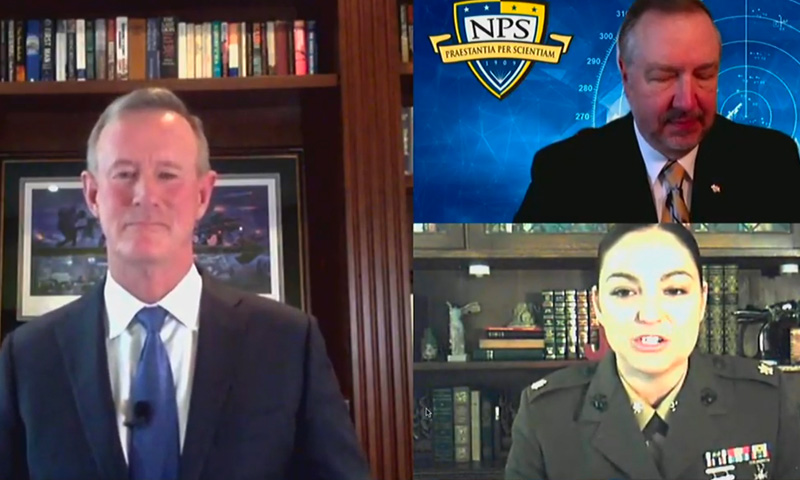 McRaven is well known in and beyond the Special Forces community, leading a number of high-profile operations including the capture of Saddam Hussein and the rescue of Richard Philips, captain of the Maersk Alabama. He developed and oversaw Operation Neptune Spear, leading to the death of Osama bin Laden in 2011, and was runner up for “TIME” magazine’s annual “Person of the Year.”

In a manner he seems to have perfected, McRaven shared lessons in leadership gleaned through his decades of experience through straightforward anecdotes … Moments in life where the world around him presented an opportunity to learn, and he took it.

McRaven has always been an avid supporter of education and demonstrated it throughout his career. During his time at NPS, he recognized a critical gap in the education offered to his Special Forces community, and designed a curriculum to close that gap, nurturing its approval through the academic structure. He succeeded and became the first graduate of that program back in 1993, now NPS’ Defense Analysis program. More than 1,600 students have since graduated from the legacy McRaven left on the university.

McRaven’s leadership lessons seemed straightforward, because he delivered them that way. He emphasized the role of critical thinking in being a member of the military, and in a leader. He stressed the importance of communication, and how much more important consistent communication becomes in times of crisis.

McRaven applauded the importance of teamwork, noting that no one “paddles the boat” by themselves. He stresses the criticality of physical and mental strength, to be prepared for hard work, toughness and intelligence.

He discussed listening … Noting how leaders must be able to hear what their people are saying, to reflect and be thoughtful. And he stressed knowing exactly where to get the pulse of your people. A great leader “draws on surrounding expertise,” he said. When decisions need to be made, and need to be made quickly. “Know who the experts are,” and trust them, he said.

And he stressed, perhaps above all else, the role of character. As human beings, we will make mistakes, but if we strive to be “moral, legal and ethical” as leaders, he said, we will be in the best position to do the right thing.

McRaven shared anecdotes that seemed commonplace in experience, easily relatable no matter what service you hail from. He offered his time on the Benjamin Franklin class ballistic missile submarine, USS Simon Bolivar, as one such anecdote. He was a new NROTC recruit, and immediately took to the CO of the boat, Cmdr. John Weldon Koenig, a University of Texas alumnus just like McRaven.

What stayed with him, though, was how the CO carried himself on the sub, and the behavior and pride that translated to his crew of young Sailors.

“The commanding officer had a certain swagger about him, a certain ability to connect with the Sailors on the submarine,” McRaven recalled. “He had a great sense of humor. He could harass [the crew] and they’d harass him…. There was this mutual back and forth, and that showed me what a great leader looked like.”

Leaders have to be close enough to know what life is like for the men and women they lead, yet must understand that personal relationships cannot cloud judgement. Great leaders, he said, exist at a “professional distance.” As a young officer, he would consistently think about how the decisions he made, or saw being made in the wardroom, would impact the men and women in the field.

He then answered several questions from a group of NPS students from the Defense Analysis program he created years prior covering a wide-range of topics, from his views on how technological advancement impacts combat to why communication matters.

In closing his remarks to an audience largely of NPS students, McRaven also stressed how he realized the importance of the education he received from NPS when he returned to the battlefield.

“One of the things you might find when you leave the Postgraduate School – or wherever you might be going to school at this time – you will be amazed at how much smarter you are,” he said. “You may not appreciate it right now, I know I didn’t when I graduated from the Naval Postgraduate School.

“But when I got back to the fleet, I realized I could see things that my contemporaries couldn’t because they hadn’t been taught how to think,” he added. “They hadn’t been giving the critical thinking skills they needed, and that really makes a difference in your career and as a leader.”

NPS President retired Vice Adm. Ann Rondeau expressed her gratitude for his time, thanking him for this ‘virtual visit; with university students.

“McRaven’s career and indeed how he lives his life truly define the words ‘patriot,’ ‘warrior,’ ‘scholar’ and ‘intellect,’” Rondeau said.