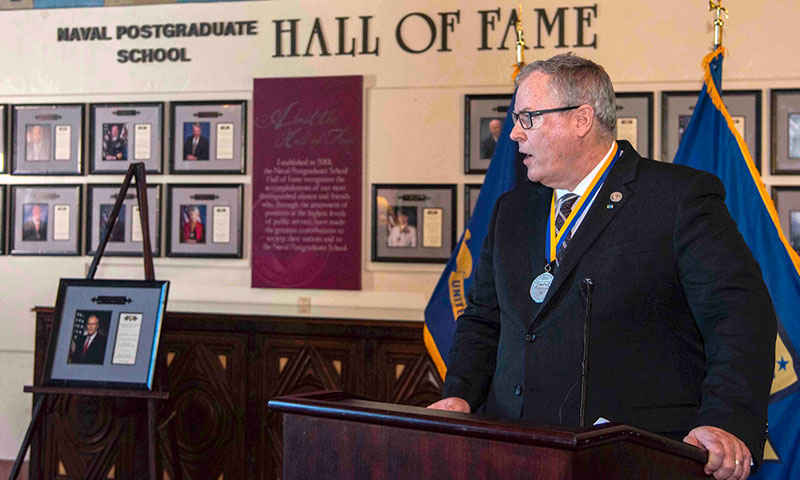 The Honorable Robert O. Work addresses the crowd during his Hall of Fame induction ceremony in Herrmann Hall, Sept. 22. Work became the 25th member of the school’s prestigious Hall of Fame and served as the commencement speaker at the Summer Quarter Graduation Ceremony the following day.

The Naval Postgraduate School (NPS) welcomed the Honorable Robert O. Work, 32nd Deputy Secretary of Defense and acclaimed national security professional, into the school’s prestigious Hall of Fame during a ceremony in Herrmann Hall, Sept. 22, recognizing his lifetime of service to the United States.

“This is a man of extraordinary ability and contributions,” said retired U.S. Navy Vice Adm. Ann E. Rondeau, president of NPS. “We have the honor of inducting him as the 25th member of our Hall of Fame and his courage, integrity and selflessness serve as an exemplary model of leadership for us all to follow as we face the challenges ahead.”

Work, a 1990 graduate of NPS, becomes the latest inductee into the Hall of Fame, established to recognize the accomplishments of NPS' most distinguished alumni and friends who, through the attainment of positions at the highest levels of public service, have made the greatest contributions to society, to their nations, and to NPS.

“I am honored, happy and humbled to be recognized with this award,” Work said. “I’m honored because of all the academic institutions I've attended, I consider the Naval Postgraduate School to be the best one yet.”

After a 27-year career as a U.S. Marine Corps officer, Work went on to hold two of the most prestigious titles in the Department of Defense, serving as Under Secretary of the Navy and later returning to the Pentagon as the 32nd Deputy Secretary of Defense.

The NPS Hall of Fame is an honor reserved for the “best of the best.” Its members include Adm. Mike Mullen, former Chief of Naval Operations and Chairman of the Joint Chiefs of Staff; Adm. Wayne Meyer, the father of the AEGIS combat system; and Vice Adm. Jan Tighe, who served as Commander, U.S. 10th Fleet, making her the first woman to command a numbered fleet.

“I am humbled to be even associated with the other high-caliber recipients of this award,” Work noted.

“As I look to the Hall of Fame members, what strikes me is that though varied in their careers and accomplishments, the one thing that each member has in common is that each of them demonstrated an unwavering, selfless dedication to their communities, to their country, and to the Naval Postgraduate School,” added U.S. Navy Capt. Philip Old, NPS chief of staff.

Work’s military career began in the Naval Reserve Officer Training Corps at the University of Illinois, where he earned a Bachelor of Science degree in biology. Upon graduation in 1974, he was commissioned as a second lieutenant in the Marine Corps. Over the course of the next 27 years, he commanded an artillery battery, and served as base commander of the Combined Arms Training Center (CATC) in Camp Fuji, Japan.

Although many believe that 27 years of service to the United States would be sufficient, Work was just getting started.

Following his retirement from the Marines, Work joined the Center for Strategic and Budgetary Assessments as a senior fellow for maritime affairs, eventually becoming the vice president for strategic studies. He later accepted a position as an adjunct professor at George Washington University, where he taught defense analysis and the roles and mission of the armed forces. And, he directed and analyzed war games for the Office of Net Assessment and for the Secretary of Defense.

In 2009, Work was appointed as Under Secretary of the Navy under President Barack Obama, serving in that capacity until 2013. After spending a year as chief executive officer for the Center for a New American Security, Work returned to the Pentagon in 2014 when he was nominated by President Obama as Deputy Secretary of Defense. He would serve the next three years as the DOD’s number two civilian official, working for three Secretaries of Defense in two presidential administrations before his departure in 2017.

A true example of lifelong learning, Work earned his Master of Science in Space Systems Operations from NPS in 1990, as well as a Master of Science in Systems Management from the University of Southern California, and a master’s degree in International Policy from the Paul H. Nitze School of Advanced International Studies at John Hopkins University.

After his retirement as Deputy Secretary of Defense, Work served as chairman of the National Security Commission on Artificial Intelligence. He is currently president and owner of TeamWork LLC, which provides insight and counsel on defense and national security issues.