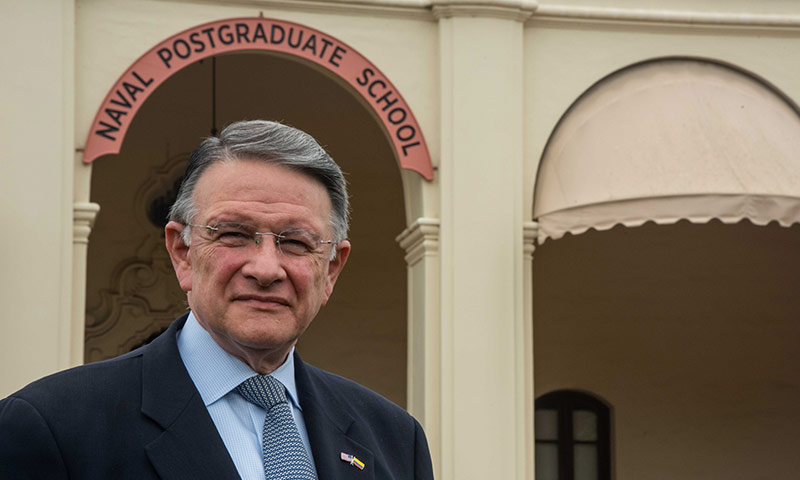 NPS graduate retired Adm. Guillermo Barrera utilized his education in electrical and electronics engineering throughout his career in the Colombian Navy, culminating in his service as Chief of Naval Operations from 2006-2010.

In the Fall of 1981, a young Colombian naval officer arrived in Monterey, Calif. to begin his studies at the Naval Postgraduate School (NPS). Exactly 40 years and an absolutely stellar career later, retired Adm. Guillermo Barrera had the opportunity to return to the esteemed university as a visiting subject matter expert from the Naval War College, and he reflected on the impact NPS has had on his life.

Barrera's career in the Colombian Navy spanned four decades. As Commander of the Colombian Navy from 2006 through 2010, he was part of the governmental team under President Álvaro Uribe that led the country from the brink of failure into an era of stability and prosperity.

Barrera retired in 2011 and became a Distinguished International Fellow at the U.S. Naval War College, where he graduated in 1993. He teaches Political Warfare and supports the main curricula and the colleges of Leadership and Ethics and Maritime Warfare Operations.

Today, he considers his time at NPS critical to his success as an O-3 to an O-5.

“NPS gave me the opportunity to be several steps ahead compared with the rest of my mates in the Colombian Navy, in the sense that it provided me with many clear concepts that we didn’t have in Colombia, especially regarding the different disciplines of engineering,” Barrera said. “Coming to NPS was a fantastic experience, not just for me but for many other Colombian naval officers who came here and would go on to become commanders, flag officers and Commanders of the Navy.”

Barrera received his NPS master’s in Electrical and Electronics Engineering in 1983 after completing his thesis work in digital controls for hard drive systems, cutting-edge at the time.

“It was future technology! We never imagined the capabilities and capacity that we have today; it was beyond our imagination,” he stressed. “NPS gave me a technologically-broader picture of the world. This proved quite important, especially in recognizing new technology that will be needed in the near future.”

“It’s important to keep an open mind to this; defining the technology correctly in order to apply it to solve specific problems,” he added. “I learned this here at NPS and it allowed me to be more successful.”

Equally invaluable were the connections and friendships Barrera forged at the university which became pivotal throughout his career, enduring relationships which continue to this day.

Fellow Colombian naval officers who attended NPS would also go on to become flag officers and commanders of the Navy, forming a tight-knit, synergistic group who directly applied their knowledge gained here to the full spectrum of naval operations.

“NPS allowed us to be one step ahead of the curve when it came to technology,” Barrera said. “These were people who were able to transform how we did business.”

For example, designing and building the Colombian submarine fleet in the 1970s was made possible through know-how gained at NPS, as was its sustainment. They remain in pristine condition today on active duty. Likewise with Colombian frigates which entered service in the 1980s.

“So that, I would say, is a strong partnership,” he said.

The strength of this bond reverberates across the Caribbean to within our own shores.

As their careers progressed, their American NPS classmates also rose in rank and responsibility within their respective services. These connections proved invaluable as the Colombian Navy took on the challenges presented by transnational criminal organizations, narco-trafficking, trafficking of human beings, and waves of human migration.

“These things affect my country, but they’re not only in Colombia,” Barrera said. “They start and end in other countries. This means that the solution is international and that we have to work together with all those affected.”

Working with his American colleagues was a “fantastic trust-building partnership experience, and it’s still there,” Barrera said. “Everything in my case started here at NPS.”