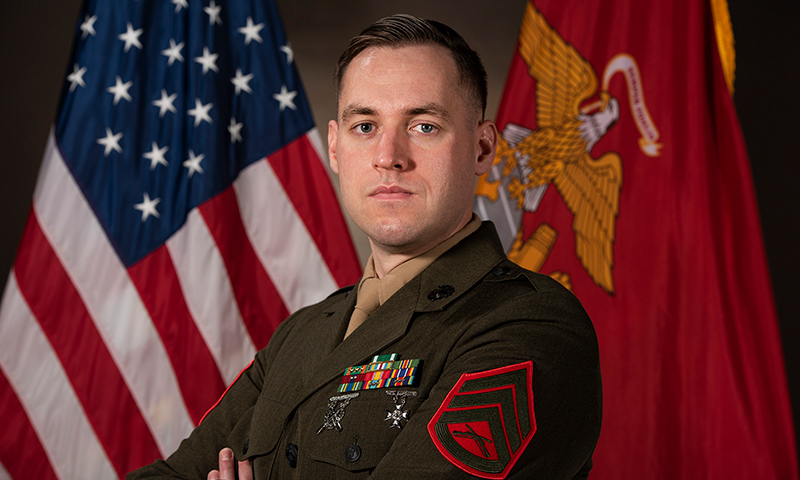 Out of 35 U.S. Marine Corps students graduating this quarter, Staff Sgt. Warren Diffey, a Foreign Area Staff Non-Commissioned Officer (FASNCO), has earned the 2021 Winter Quarter Marine Corps Association Superior Service Award for Outstanding U.S. Marine Student, one of a few enlisted Marines to have earned this honor. This award is presented to a graduating Marine Corps student based on superior contributions to the student body, professional community, and local Monterey area.

Diffey is one of the few staff non-commissioned officers (SNCO) at NPS who are now in an education pipeline which fosters greater academic goals for enlisted Marines. The rigorous, one-year certificate Foreign Area (FA) SNCO program had Diffey participating with many Marine Corps officers who will go on to be FA officers around the globe. One of the main differences is the certificate program does not require a thesis to be written. Nonetheless, according to National Security Affairs faculty, Diffey was a standout student and held his own with his classmates.

As his award nomination letter reads, “In each class … Staff Sgt. Diffey was just one among more than 20 students, yet he always stood out as one of the best. Beyond his written work, which was excellent, he distinguished himself by his consistently high level of preparation, engagement, participation and achievement.”

Diffey was highly honored to be selected for the honor.

“It still doesn’t seem real,” he said. “I am deeply thankful to all my professors and the other faculty members that helped me during my time at NPS. I am so grateful to have had the opportunity to learn from such diverse and highly-respected individuals. All my professors love what they teach and are willing to spend time outside of classes discussing any topic within their field.”

Diffey’s high praise for NSA faculty and his respect for his fellow students is part of his ethos in becoming the best FASNCO he can be. He is looking to the future where his contributions will make a difference in the Marine Corps.

“This is one of the most incredible opportunities that I have been afforded in my career. The level of education provided at this institution was above and beyond my expectations,” said Diffey.

Diffey showed he was an exemplary student by his preparation for the coursework last fall, which involved a series of case studies and concluded with a crisis simulation that requires close collaboration with a group of students to predict an Asian country’s most likely course of action in response to a complex crisis.

“The battlefield is becoming more complex, and it is necessary to leverage all the talent that the armed forces possess to be prepared for the future,” said Diffey. “Future warfighters need to be more intelligent, think faster, and make more significant decisions than their predecessors. Staff NCOs must be armed with the critical thinking skills provided by institutions of higher education to succeed in Great Power Competition. I cannot think of a better institution to provide these skills to Staff NCOs than NPS.”

Diffey will now begin his follow-on training as soon as COVID-19 travel restrictions are lifted, attending virtual language training in Japanese following his graduation on Mar. 26.

One of Diffey’s long term goals is to achieve the rank of Master Gunnery Sergeant and be a Marine as long as the Corps will keep him.

“The truth is I want to retire knowing that I made the Corps better in some way. I am grateful for my life, and I owe it all to the institution that I serve,” he said. “My long-term goal is to get into a position to make the biggest impact and invest my energy into repaying the debt that I owe to the Corps.”