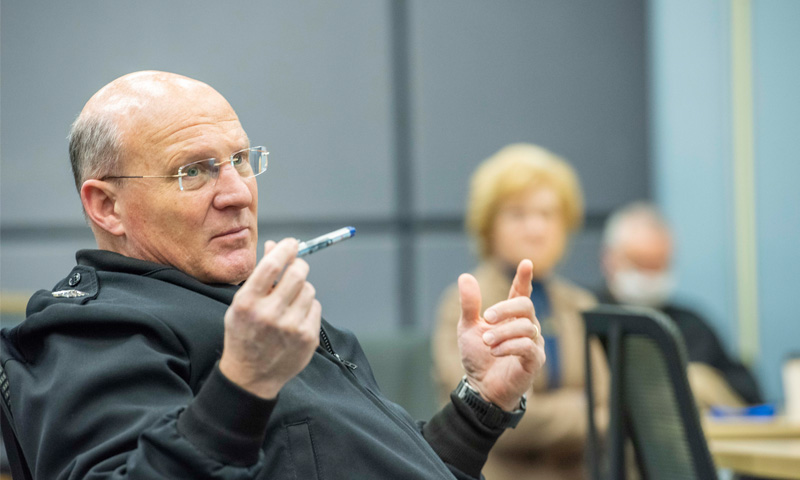 Chief of Naval Operations Adm. Mike Gilday engages with a small group of NPS students, faculty and leadership, Dec. 17. Gilday explored the university’s latest research and experimentation efforts in unmanned systems, artificial intelligence and space engineering, among others, to gain an understanding of how NPS researchers are impacting the future of naval warfare.

In an effort to explore current research related to key naval priorities, Chief of Naval Operations (CNO) Adm. Mike Gilday visited the Naval Postgraduate School, Dec. 17, to assess the university’s latest research and experimentation regarding unmanned systems and space engineering, as well as gain an appreciation for what NPS’ faculty and students are doing for the future of warfare.

“NPS is the Navy’s applied research university,” said Gilday. “There are functions that occur here that [the Navy] can’t get anywhere else in the world. The surplus of experience and knowledge partnered with the ability to work on classified material on a secure campus makes NPS an invaluable asset to the fleet.”

As NWSI Director and Professor of Practice retired Navy Capt. Jeff Kline explained to Gilday, the ultimate purpose of NWSI echoes NPS’ ultimate purpose, which is to be a vital link between the institution and the naval forces in the development of concepts, wargaming and experimentation that leads to the rapid prototyping of emerging technologies.

“The NPS mission really hasn’t changed since its inception,” said Kline. “Our job is to take a look and capture emerging tech and provide both the education and research environments so that officers can assess those emerging technologies and learn how to apply them in future conflict. That was our mission when we first started at the naval academy with mechanical engineering and radars, and it’s our mission today as we take a look at artificial intelligence, machine learning and quantum sensing capabilities.”

Lt. Timothy Howarth, an NPS student who is applying machine learning to develop better terrain navigation, was one of three students who presented their research to Gilday. He was honored to share his work, as just one example of the valuable research efforts underway across campus.

“I think seeing students who are motivated to change the Navy for the better will show [Gilday] just how crucial NPS is,” said Howarth. “This is the perfect place for Sailors to learn. It lets us further our education and continue to make connections that will make tomorrow’s Navy better than today’s.”

Overall, the brief visit provided Gilday with just enough information to peak his interest, noting he was very interested in the presentations and looking forward to seeing what comes out of NPS next.

“NPS is effectively creating the future leaders of the future Navy,” he said.