Dark networks are the illegal and covert networks (e.g, insurgents, jihadi groups, or drug cartels) that security and intelligence analysts must track and identify to be able to disrupt and dismantle them. This text explains how this can be done by using the Social Network Analysis (Sna) method. Written in an accessible manner, it provides an introduction to Sna, presenting tools and concepts, and showing how Sna can inform the crafting of a wide array of strategies for the tracking and disrupting of dark networks

Imperialism remains a perennial issue in international relations today, and nowhere is this more evident than in the intensifying competition for global resources. Leo J. Blanken explains imperialism through an analysis of the institutions of both the expanding state and its targets of conquest.

The Path to Salvation: Religious Violence from the Crusades to Jihad 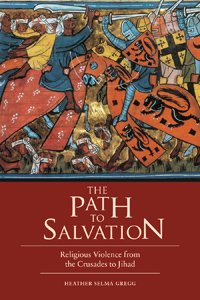 In the wake of 9/11, many have tried to make sense of the rise of militant Islam. The general perception is that Islam is more violence prone than other religions. Here, however, Heather S. Gregg draws comparisons across religious traditions to investigate common causes of religious violence. The author sets side by side examples of current and historic Islamic violence with similar acts by Christian, Jewish, Buddhist, and Hindu adherents.

Simons and her Special Forces coauthors argue that the U.S. has never articulated the clear position on national defense, "respect our sovereignty and we will respect yours." The Sovereignty Solution is a radical, yet sensible, approach to global security and world order that doesn't require the U.S. to engage in global policing or nation building.

The book's goal is to provoke heightened awareness of the gaps and disconnects between what the U.S. says and what it does, how it wants to be perceived and how it is perceived. Without leaning left or right, the authors hope to initiate a serious debate and to force Washington to rethink what it sends servicemen and women abroad to do.

Ten officers in the DA department participated in the study and were instrumental in pulling the overall argument together.

This anthology of cyber analogies will resonate with readers whose duties call for them to set strategies to protect the virtual domain and determine the policies that govern it. Our belief is that learning is most effective when concepts under consideration can be aligned with already-existing understanding or knowledge. Cyber issues are inherently tough to explain in layman's terms. The future is always open and undetermined, and the numbers of actors and the complexity of their relations are too great to give definitive guidance about future developments. In this respect, historical analogies, carefully developed and properly applied, help indicate a direction for action by reducing complexity and making the future at least cognately manageable.