In lieu of a thesis, SEA cohorts conduct an interdisciplinary design project of significant importance to the Navy. This begins in the fifth quarter with a course on project management, where the project plan is built. Then SEA students analyze the need for the system, determine its operational concept, develop functional requirements, produce the system architecture, allocate the requirements among sub-systems, manage the design of the sub-systems, assure that the final design is integrated, assess any trade-offs made, and then implement and test the solution. Other students across campus may get involved in the design of the sub-systems.

The project results are widely disseminated. Executive Summaries of past projects have been read by or briefed to the CNO and the Defense Science Board, among many others. Student work has great visibility and an impact on major policy discussions.

Students who lead and participate in the campus-wide projects leave NPS with an unparalleled grasp of the strategic, tactical, and technical issues surrounding an important Navy problem. 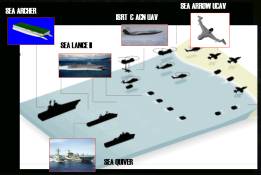 In 2002, students developed the concept and designed a force for combat in the littorals. This force included UAV combat aircraft; UAV ISRT aircraft; small fast fighting ships; a new, very fast automated carrier built from the keel up to support UAVs; the command and control network; the logistical support system and ships; and several new weapon systems such as a Free Electron Laser for point defense. They developed and tested the operational concept through campaign analysis. View an article from Proceedings about real-world utilization of SEA projects (PDF).

Follow on projects have covered a wide range of topics, including multiple studies on expeditionary warfare (operational concepts, dominance in the littoral, and logistics), maritime domain security and defense, Joint Fires, and more recently, studies on Distributed Lethality to include the design of Distributed Naval Surface and Air Forces. More detail on each completed project is available by using the link to the archived projects at the top of this web page.