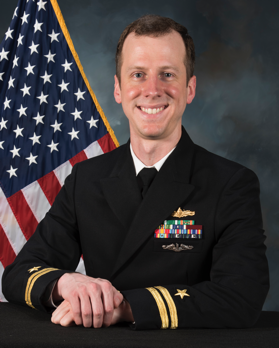 
LT Ben Hoover was born and raised in Vancouver, WA and enlisted in the US Navy in 2004, serving in USS PENNSYLVANIA (SSBN 735(G)) before departing to the United States Naval Academy, graduating in 2011 as a Surface Warfare Officer. He reported to USS DEWEY (DDG 105) and spent most of his first tour in the Engineering Department. The DEWEY embarked upon her maiden voyage to southeast Asia and the Middle East before returning to her homeport of San Diego a year later. LT Hoover transferred to USS McCAMPBELL (DDG 85), homeported in Yokosuka, Japan, in 2014 for a tour as the ship’s fire marshal and assisted in a major shipyard maintenance period. He laterally-transferred to the Foreign Area Officer community while stationed at the US Pacific Fleet’s command headquarters in Pearl Harbor, Hawaii. LT Hoover reported to NPS in 2018 for his studies concentrating on sub-Saharan Africa. Ben enjoys SCUBA diving, skydiving, flying, and sailing.