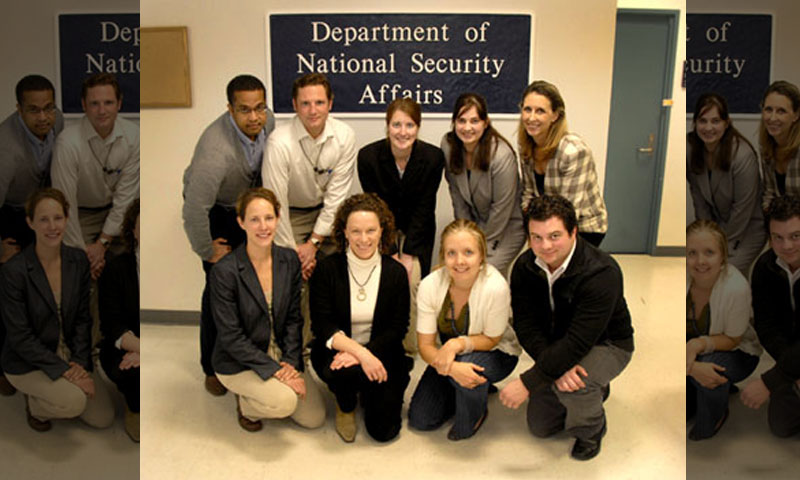 Faculty and staff supporting the Project on Advanced Systems and Concepts for Combating Weapons of Mass Destruction (PASCC) stand beside the National Security Affairs sign in Glasgow Hall. The team helps acquire and distribute WMD research funding on behalf of the Defense Threat Reduction Agency, while also making the research more readily available for institutions to share their findings.

The Naval Postgraduate School’s Center on Contemporary Conflict (CCC) is now home to the Project on Advanced Systems and Concepts for Countering Weapons of Mass Destruction (PASCC), a multi-million dollar program directing research and strategic dialogues on weapons of mass destruction (WMD) on behalf of the Defense Threat Reduction Agency (DTRA) Strategy and Plans Enterprise. CCC has assumed these functions from the former Office for Advanced Systems and Concepts (ASCO), which was disestablished in June 2011.

“The core function of what ASCO did and what PASCC now does, is to try to anticipate and analyze ways in which the United States can help itself and its allies manage and reduce the threat from weapons of mass destruction,” explained Dr. Anne Clunan, Director of the CCC and Associate Professor in the Department of National Security Affairs (NSA). “The majority of studies that have happened to date have been focused on nuclear weapons, counter proliferation, non-proliferation, bio-security, counter-terrorism, and reducing the threat of nuclear weapons and other weapons of mass destruction getting into the hands of terrorists.”

The relationship between DTRA and CCC was initiated by former NPS faculty member Peter Lavoy, the current Principal Deputy Assistant Secretary of Defense for Asian and Pacific Security Affairs in the Office of the Under Secretary of Defense. Over a period of 12 years, Lavoy and other NSA faculty members helped NPS build a relationship with DTRA. As the relationship evolved, DTRA began to understand that NPS and its CCC were institutions capable of furthering WMD research and unofficial diplomacy.

The PASCC was launched at NPS in June of 2011, with a call for proposals quickly bringing innovative projects into view. CCC Program Manager Meghan Rasmussen explained that faculty and staff in CCC were well prepared to handle the transition, and saw the program as an opportunity for NPS to help further an area of national security already being extensively studied by university researchers and students. The center also plans to make NPS research more widely available to potential policy and research communities that might benefit from it.

“Although PASCC is still fairly new, it demonstrates our capacity to manage these large and complex efforts,” explained Rasmussen. “We are working on expanding the way we release research products to quickly and efficiently get results out to the public so that other researchers can leverage them, while also working with stakeholders in Washington to share our research agenda.”

One of the primary functions of PASCC is to distribute millions of dollars in grants to qualifying research proposals and engage in strategic engagement with key global partners. Clunan explained that the decision for CCC to assume the program for DTRA ultimately came down to the merit and footwork of NPS faculty in proving the value of the university, and the academic and administrative capacity of CCC to assume responsibility of PASCC.

“The project fits very well with the expertise of the CCC faculty, and the National Security Affairs department faculty, in that we have a very deep bench of folks who are focused on WMD, strategic stability and extended deterrence issues and they also have very deep regional expertise,” explained Clunan. “And that is not something found at a lot of major research universities.

“We take pride in the fact that some of our faculty have been instrumental in furthering, for example, U.S. China policy or U.S. Pakistan policy as a result of some of the research and engagement they have been doing for the past eight years.”

The PASCC positions WMD researchers from around the world to further their work and ultimately helps open doors for greater understanding of, and potential solutions to, WMD threats.

“This year we expect to be supporting 29 projects at a variety of institutions, a third of those are at NPS,” explained Clunan. “And that enables us to engage with a number of important strategic partners.”

“I think that this will be a growing opportunity for NPS as the definition of what is a weapon of mass destruction or mass effect will change as technology changes,” she continued. “And this enables the university to be where it should be -- which is on the cutting edge of research that is relevant to the nation’s security. Instead of looking behind us and trying to fight old wars, we’re actually looking forward and trying to anticipate what technologies and situations may develop that could be threats to the United States and its allies.”