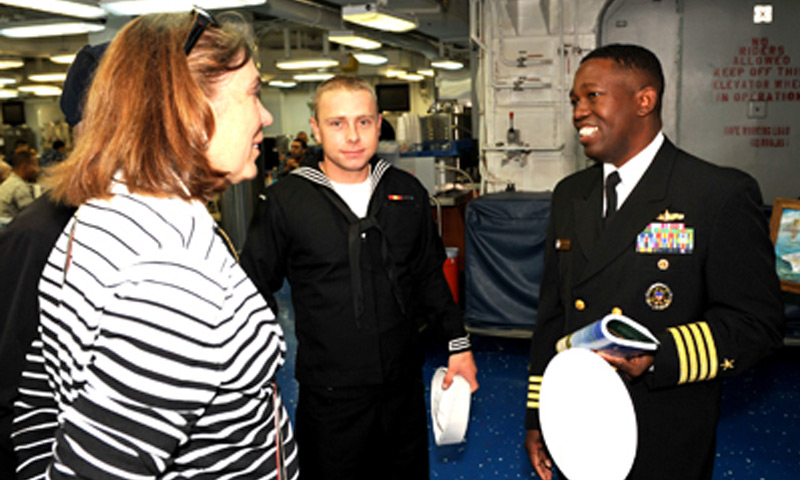 Pringle is one of many NPS Alumni in key leadership roles during San Francisco’s annual salute to the sea services; however, his tour aboard Makin Island is particularly significant due to the relevance of his studies at NPS and his current position.

“My thesis project focused on the Smart Gator concept,” said Pringle. “I looked at the employment of technology, machinery controls and systems automation that could effectively reduce manning aboard amphibious ships.”

While serving as an integral piece of command leadership aboard the Navy’s newest and first gas turbine powered amphibious assault ship, Pringle sees the technology and concepts studied at NPS utilized operationally in the fleet.

“The concept and associated technology was studied through student projects at NPS and first operationally tested aboard the amphibious ship USS Rushmore,” he said. “Back then, it was first- generation concepts. Now some of the technology I studied is in its third and fourth generations and is being used aboard Makin Island.”

While the technical aspects of Pringle’s degree remains a solid basis for his responsibilities as executive officer, he emphasizes the importance of the processes and procedures he learned through graduate level education.

“My time at NPS was well spent. Overall, it taught me to think big thoughts and look at problems from a big picture perspective,” said Pringle. “The most important lesson I learned at NPS was actually how to learn. Working on my master’s thesis taught me methods of assimilating and processing information at a higher level.”

Pringle also noted the importance and significance of exposing military officers to graduate education while serving on active duty.

“I highly recommend that any military officer with the opportunity attends NPS. In an organization as large as the military, the more senior you become, the more you realize that graduate-level education is a requirement,” said Pringle. “To run an organization as big as ours effectively and efficiently, we need to have leaders that have studied at the higher level.

“Sending military officers to graduate school is the best investment of tax dollars I can think of,” he added. “It provides a certain level of sustainability and the ability to take care of and train future leaders.”

As well as being an effective, relevant and challenging university, Pringle also praised NPS for its location and the quality of life measures and activities he was able to participate while studying in the Monterey area.

“The Monterey area and NPS campus is conducive to higher learning,” said Pringle. “I have very fond memories of NPS and I built a lot of lasting relationships while studying there. My tour afforded me the opportunity to focus on community outreach efforts. I was the member of many organizations and spent my off time tutoring students in the community.”

Although the timing of his education was untraditional, the decision to attend NPS proved to be a beneficial and rewarding career choice for the Navy veteran with nearly 24-years of experience.

“I attended NPS just after my department head tour, which is not common,” he said. “It was against my detailer’s wishes at the time, but it ended up being one of the best decisions I’ve made in my career. The most exciting part about my time spent at NPS was the completion of my thesis.”

Pringle, a native of South Carolina and holder of two master’s degrees, brought the same dedication, patience and understanding that made him a successful student to his role as executive officer and to San Francisco’s Fleet Week. He could often be found conversing candidly with ship visitors during public tours aboard Makin Island or meeting a crewmember’s family that visited the ship. He’s quick to offer an open ear or guidance to Sailor’s serving under his command and also offered a bit of astute advice to students new to the NPS community.

“Use this opportunity to stretch your mind,” he suggested. “When you’re a resident student you’re totally immersed in a solid learning environment,” he said. “This learning adds tools to your leadership tool kit, and will make you a better officer. My advice is to finish your thesis while at school, and to pick a topic of study that interests you,” he continued. “There will be tough moments at certain points in your studies, but put in your work and it will be worth the effort. Your accomplishments at NPS are part of building your legacy.”

Pringle will assume duties as commanding officer of Makin Island in Feb. 2012. At sea, he served on  the USS Ranger (CV 61) and the USS Portland (LSD 37) in the Engineering Department. Other sea tours include USS Fort McHenry as Executive Officer and as Chief Staff Officer for Commander, Amphibious Squadron Four/USS Wasp Expeditionary Strike Group. He also served as Commanding Officer, USS Whidbey Island (LSD 41) from July 2004 to February 2006. His command tour was highlighted by Whidbey Island’s participation in Hurricane Katrina Relief Operations in September 2005.