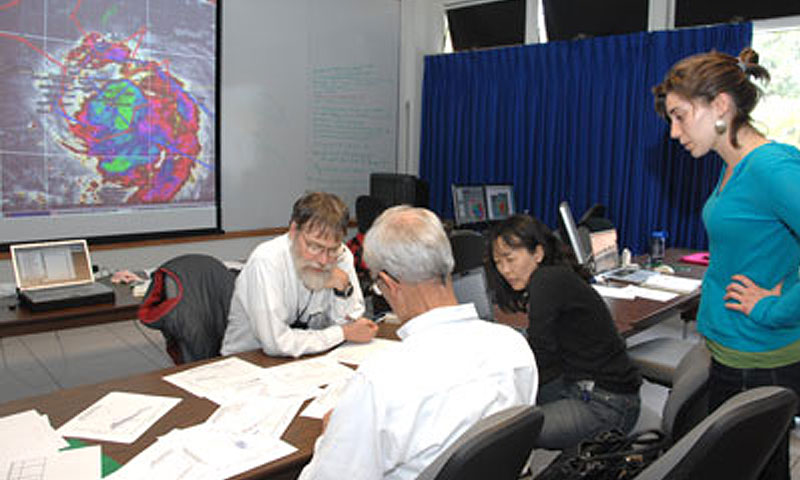 NPS Meteorology Prof. Russell Elsberry (center) confers with his team of investigators including Eric D’Asaro, University of Washington (left), Dr. Sue Chen of the Navy Research Lab, Monterey (right seated) and Oceanographer Rosalinda Fortier, University of Washington graduate student (standing). The team meets daily, conferencing in METOC experts from across the Pacific to accurately predict the path and intensity of storms as they develop along the Pacific Ocean.

Researchers from governments, militaries, weather agencies and universities around the world are participating in an Office of Naval Research (ONR) and Taiwan National Science Council sponsored research project focused on learning more about the Pacific Ocean’s response to typhoons.

The Impact of Typhoons on the Ocean in the Pacific, or ITOP study, is a collaborative, international effort headquartered at the Monterey Operations Center (MOC) on the Naval Postgraduate School campus, where researchers have been continuously tracking storms over the past several weeks.

It’s fast-paced work … in order to get the most comprehensive data possible, researchers track developing storms daily for both intensity and path. When a storm reaches typhoon strength, the team acts quickly, descending upon the weather system by sea and air to drop sensitive equipment and sensors on the ocean surface and below. At that point, they hope the typhoon continues on the path they’ve predicted, passing through the drop zone so the instrumentation can collect detailed data on both the weather system and the water below it.

To date, two major storms have been captured in detail as part of ITOP – one was Typhoon Fenapi, which was successfully tracked through the Pacific Ocean before impacting Taiwan in mid September.

“During Typhoon Fenapi we were able to take numerous oceanographic and atmospheric readings,” said Eric D’Asar, ITOP’s lead scientist and a professor of oceanography and applied physics at the University of Washington. “We were also able to forecast the storm’s track within 10 nautical miles, 48 hours in advance.”

The study is examining the ocean’s response to typhoons, in particular, meaning the accurate prediction of the storm’s path is critical to success.

“We needed to collect data from inside the water,” said D’Asaro. “The challenge is to get collection instruments in the path of an active typhoon. Good forecasting is crucial for us to advise and direct the deployments of our various collection agents.”

Scientists at NPS and in the field are using a variety of methods along with technologically-advanced equipment to collect data directly from the typhoons. Moored array buoys are placed in areas that traditionally have a strong likeliness of being in the path of a storm while other data collection technology is deployed after the storm is spotted.

Other methods of collection included the launching of gliders and deploying various floats and drifters from Air Force C-130’s assigned to the 53rd Air Force Reserve Hurricane Hunter Squadron. These techniques coupled with accurate forecasting allowed researchers to collect data on the formation and strengthening of typhoons and to gather information on the properties of cold water troughs that follow in the wake of a storm.

“We’re taking a look at how long the water stays cool after a typhoon,” said D’Asaro. “Temperature in the water following a typhoon cools dramatically. This cooling has a tremendous effect on the acoustic properties. Studying this cooling will allow us to make better acoustic propagation predictions.” 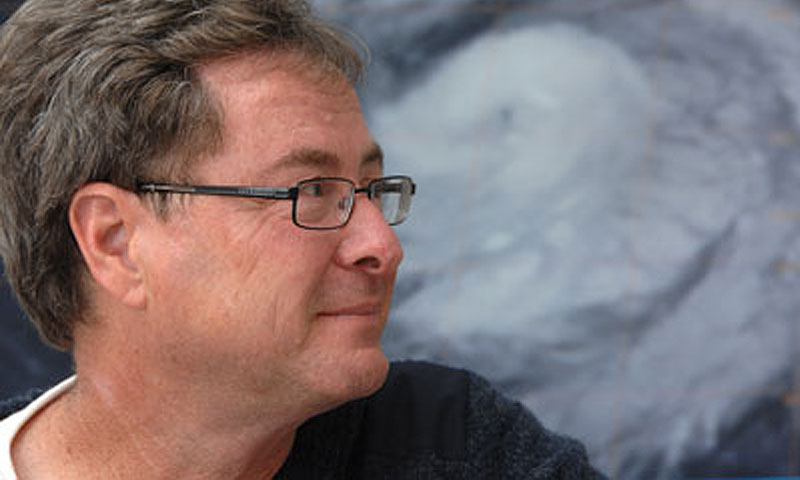 Australian Meteorologist Gary Foley looks on at a live picture of Typhoon Fenapi as it develops momentum towards Taiwan, Sept. 17. Foley is part of the international team of scientists at NPS, gathering live data, sharing resources and models, and predicting typhoons in support of the ITOP study.

“This partnership between us and ONR is strong and allows us to provide data to various Navy meteorological units. This data is for the fleet to use, and we are also looking at how well their models work,” said D’Asaro. “We would also like to see if we can improve on existing models.”

Studies conducted during ITOP also have a more direct impact on plans and relevancy to the Fleet.

“These storms dramatically alter the makeup of the ocean,” said Patrick Harr, an NPS professor of meteorology and scientist with the ITOP project. “This affects everything from acoustic propagation and tidal properties currents and eddy fields.”

As with most research efforts at NPS, student education is a critical part of process. ITOP is serving as a solid platform to further graduate level studies while collecting valuable information at the same time. “NPS has sent one Ph.D. student and two master’s degree students, and other members of the staff, to the Pacific region to aid in observation and collection of information,” said Harr. “It’s really nice for the students to be involved in this research.”

Harr also spoke of the importance of NPS’ communication infrastructure as a key component to the project.

“More than a dozen national, international agencies and universities are taking part in this project and NPS was selected to act as the virtual operations center,” said Harr. “We are able to act as the control hub and research center because of the software package that NPS maintains.”

Researchers and forecasters working out of Monterey are directly affecting collection efforts in the Pacific through daily conferences and electronic briefings with team members around the globe.

“Because of the outstanding communication capabilities at NPS, our team is able to be directly involved in key decision making without having to deploy around the globe. We wouldn’t be able to do this without the tremendous support of NPS’ IT department. It’s because of this support that we can do virtually everything from Monterey, but actually getting into the plane and flying to a storm.”

ITOP research will continue through mid-October and so far has raised interesting research questions.

“We have already seen things in the data that we didn’t expect,” said Harr. “The thing about research is the opening of one door can lead to many more questions.”