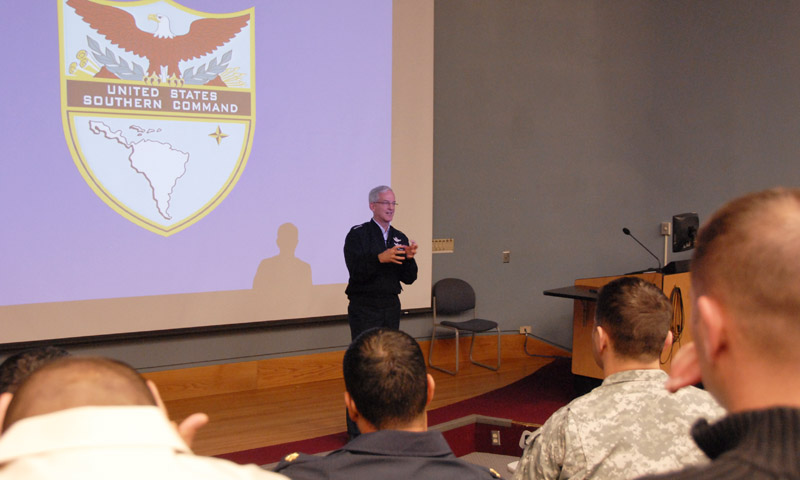 Air Force Gen. Douglas Fraser, Commander, U.S. Southern Command, delivers a brief to NPS National Security Affairs students and Foreign Area Officers during a campus visit, Jan. 23. Along with his own presentation, Fraser was briefed by NPS leadership on the university's core mission and objectives as well as several educational and research programs.

The briefing gave students a firsthand perspective on both the unique challenges and areas of progress within Latin America. Fraser spoke highly of the partnerships that the U.S. has and continues to strengthen with the 31 countries in the SOUTHCOM area of responsibility (AOR).

“This is our real goal: security, stability, prosperity,” explained Fraser. “We will stay ready to conduct joint and combined full spectrum operations, but we really don’t see that as an issue today. We have great military relationships with almost every military in the region. Our real objectives are to defend the southern coast of the United States, foster regional security, and be an enduring partner.”

Fraser explained the importance of the region, particularly as the issue of transnational organized crime (TOC) and trafficking reach a critical point. Fraser explained that illicit trafficking is one of the most expensive and dangerous problems facing the region as drugs, weapons, counterfeit goods, humans and exotic animals are trafficked from country to country.

The lucrative practice of illicit trafficking – a $394 billion global industry – means that criminal activity is crossing country boundaries, making the issue one that takes full regional cooperation to solve. It also adds to other regional challenges, such as narco-terrorism, gang activity, and natural disasters. Fraser noted that interagency boundaries are difficult enough within a single country, but that problem becomes exponentially more difficult when it crosses physical borders.

“The real issue that we are all going to face through this next century is, in my opinion, transnational organized crime. And the reason it’s going to be such an issue is that institutions – our government as well as other governments – are set up to work bilaterally,” he noted. “It’s not easy to work across interagency boundaries within our own country, and it gets even more restrictive if you go government to government.

“That’s where the challenge will be – transnational organized crime crosses all of those boundaries,” he continued. “It doesn’t respect those boundaries, and that’s why I focus on it as much as I do.”

In addition to a strong focus on the developing interagency, inter-government cooperation to combat crime, Fraser noted that sheer demographics alone provide a compelling reason to focus on developing positive and mutually-beneficial relationships with the nations within SOUTHCOM’s AOR.

“You look at the Southwestern part of the U.S., there are today counties where over 50 percent of the population is of Hispanic heritage. That will influence our country and it will influence how we look and how we act,” explained Fraser.

“It truly is an important region,” he continued. “There is a land bridge from Latin America and South America to the United States. And the oceans that have protected us still protect us but not in the same manner that they did before … So what we are very focused on is building partnerships.”

While addressing the challenges facing the Combatant Command, Fraser also noted there has been significant progress made in several capacities … and that growth over the past decade plus should not be overshadowed. The region’s growing literacy rate, reduction in poverty, and sustainable GDP among others, Fraser noted, provide a positive hope that, despite being a region with some of the highest homicide rates in the world, the countries do have some foundational stability upon which to grow. Fraser emphasized the progress that has been made in humanitarian assistance and disaster relief efforts as well.

Prior to fielding a handful of questions from the students in attendance, Fraser encouraged the group to be strong, firm leaders and to see the region for its true potential.

While visiting NPS, Fraser took the opportunity to hear briefings from departments across campus, and to speak with university leaders about the school’s mission and objectives. He came away noting that NPS serves a unique purpose, especially in bringing together international communities to help foster those critical global partnerships.

“I see it throughout the world, in everyone we integrate with, and I hear it from our Latin American partners as well. The educational opportunities we have allow students a chance to talk over issues that they see in common … And they otherwise might not have the opportunity to see it from the perspective of someone who is not in that region,” he noted. “It is critical to building an understanding and a relationship. When you know somebody, you can break through a lot of barriers that you wouldn’t be able to otherwise. It is critical that our partners are here so that we understand them and they understand us.”