Students in NPS’ new Remote Sensing Intelligence degree program gather on the steps of Spanagel Hall for their class photo. The students are studying under the Scholarship for Service program, and are sponsored by the ISR (Intelligence, Surveillance and Reconnaissance) Task Force to apply their education to counter-IED operations in theater.

The Naval Postgraduate School celebrated a new addition to the academic lineup as 20 students in the Remote Sensing Intelligence (RSI) master’s degree program recently completed their first quarter of classes. With three more quarters to go, the fast-paced program provides students with a comprehensive education in remote sensing, and prepares them for jobs in critical national security fields with one of several potential sponsor organizations after they graduate in the winter.

“Remote sensing means taking images from a distance,” explained Physics Professor Richard Olsen, one of the key faculty facilitating the RSI program. “Satellite imaging of one kind or another – optical, infrared, radar – those are sort of the cornerstone technologies that comprise remote sensing. It has to do with obtaining information about something at a distance without interacting with it directly.

“It optimizes your ability to conduct warfare,” he continued. “Because the more information you have about where you are going and what’s there, the more effective you can be. Mission planning, absolutely, requires the type of work we are doing.”

The students selected for the program come from a variety of academic backgrounds of study, all with the common goal of soon directly using their remote sensing education to benefit the warfighter. All civilians except for two, the students were accepted into the Scholarship for Service program, with this cohort sponsored by the ISR (Intelligence, Surveillance and Reconnaissance) Task Force to focus on counter-IED (improvised explosive device) efforts in theater.

Without having previously been government employees, the NPS environment is a new and exciting one for many of the students. RSI student Christopher Burt knew of NPS’ academic reputation before he joined the cohort, and he sees the program as a unique opportunity to merge the perspectives of military and civilians.

“Having people trained in the civilian world as scientists – and with a lot of us having extensive commercial experience too – I think you get a new and fresh perspective on the scientific world,” said Burt. “Adding that to the expertise of the military men and women in the DoD can only help.”

Olsen noted that the students’ education will directly benefit the Department of Defense. Remote sensing is an invaluable tool for gathering intelligence, and one that the defense community has seen the value of. 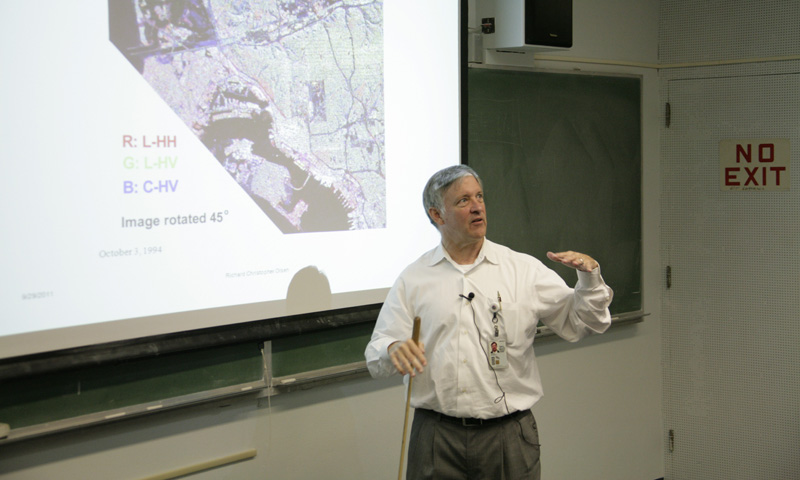 NPS Physics Professor Richard Olsen conducts class with a packed house, among them the 20 students in the new remote sensing intelligence program. Roughly half of the courses in the program are new, developed specifically to prepare students for applying their remote sensing education within the defense community.

“The military doesn’t conduct operations without a significant amount of information,” explained Olsen. “Operationally, it’s very important. There’s an anecdotal event that we talk about in our national systems class where some British Special Forces were about to go into a location in Afghanistan and very late it was determined using some remote sensing technology that the area they were going into, there were already people there. The British troops would have been killed if they had not been warned about the presence of these forces.”

The RSI program has incorporated a significant number of new courses designed specifically to meet the needs of the intelligence community to which the students will be transitioning after graduation. Olsen has taken feedback from faculty on what areas of study are important, and developed a curriculum that he feels touches on the important aspects of the field. Students will, in the end of their studies, have the skills to solve critical problems for the warfighter.

Olsen highlighted an example. “One of our big projects in basic remote sensing was looking at helicopter landing zones,” he explained. “One of the major problems for people doing helicopter operations in Afghanistan and Iraq is dust – dust clouds that come up from the helicopter blades. So the trick is to land some place that doesn’t have dust.

“We actually had a project designed to, in a very operational way, provide the planners techniques for taking images of operational areas and running some simple algorithms that would tell them ‘go’/’no go’ landing zones. And it turns out you don’t normally have to go very far to get from a bad place to a good place if somebody will just tell you ahead of time.”

Texas A&M graduate Steven Terry received a Bachelor of Science degree in Animal Science and a Master of Science degree in Geography before joining the remote sensing program at NPS. He and his peers have incredibly diverse backgrounds, but all are working towards a common goal. Terry is one of two former military students in the current class, having worked in the intelligence community.

“The main benefit of being at NPS is the relevance of the classes while building the body of knowledge about the science,” explained Terry. “This education will provide us the background information to go into the Intelligence Community and contribute to solving their geospatial problems.”

Olsen is pleased with the interest in the program, and hopes to add some Army students to future cohorts, giving some of the end-users a chance to study remote sensing and the technology that will be utilized by soldiers in theater. Olsen noted that there are few universities currently offering remote sensing programs, and even fewer – if any – have the access to Sensitive Compartmented Information Facilities (SCIF) and faculty with the clearance to teach classified material. 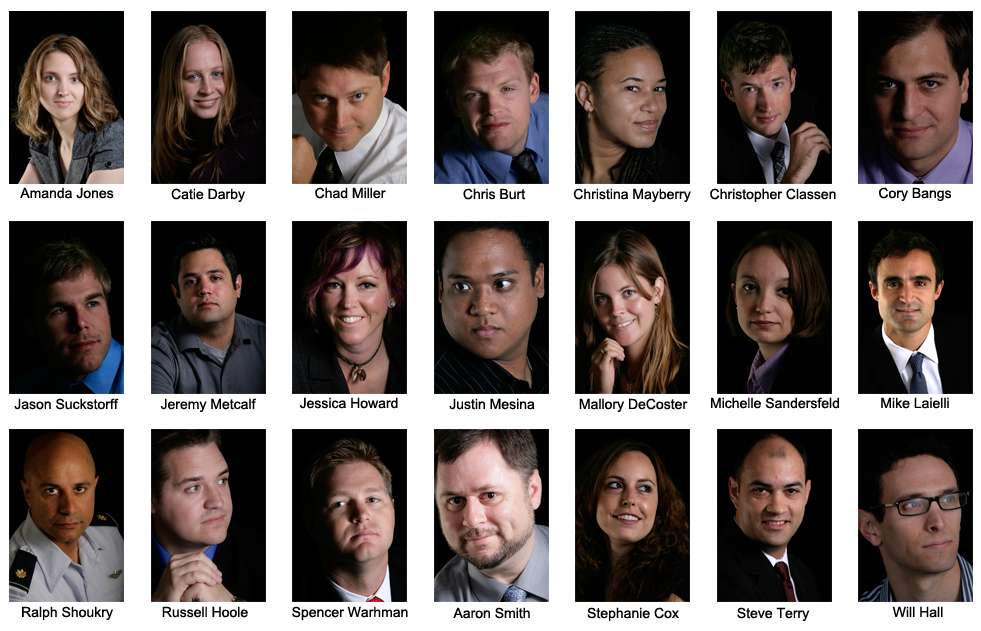