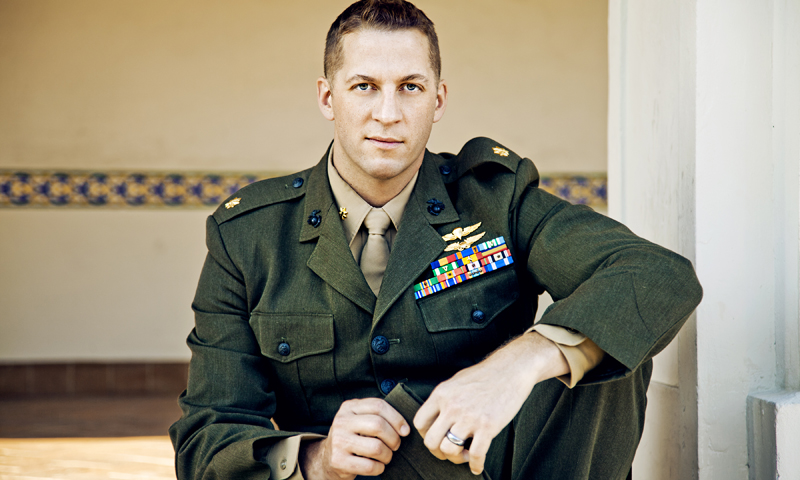 Marine Corps Maj. Robert Dyer, an active duty Marine and Naval Postgraduate School alumnus, has developed and marketed a nutritional energy shot that he envisioned while deployed to Afghanistan.

Marines are supposed to relax and blow off steam when they get home from a combat tour. U.S. Marine Corps Maj. Robert Dyer of Tacoma, Wash., apparently didn’t get the memo – he started a company.

Dyer is a former Special Forces operator and a financial management graduate from the Naval Postgraduate School (NPS). And while he is currently applying his degree teaching economics to future officers at the U.S. Naval Academy (USNA), he is also founder of Noots Nutrition, makers of RuckPack, a liquid nutritional supplement designed with input from U.S. Special Forces operators.

Dyer began developing RuckPack while deployed to Afghanistan as a forward air controller with the Marine Special Operations Command (MARSOC).

“It wasn't so much my forward air controller tour that created RuckPack as it was the men I was proudly serving with … My life existed to support those ground forces, when they needed something that was a healthy alternative to other energy drinks, I got to work,” said Dyer. “If even a couple service members perform better because of something I helped to create, the time was well spent.”

Deployed service members are frequently subjected to long hours and combat troops often operate at night with little recovery time between operations. Even non-combat troops are routinely subjected to 13-14 hour days with few days off for months at a time, a possible factor in the use of energy drinks throughout the military.

“The bottom line is that our guys are out there right now fighting for our country. When you're there in that moment, and your back is against the wall, if someone hands you a Red Bull or a Monster you're going to drink it … drinking those [energy drinks] only gives you energy for a short amount of time, and you don't always get to pick when the fighting starts.”

Unable to find a healthy alternative to the high caffeine and sugar-laden drinks available to deployed service members, Dyer took matters into his own hands.

“We wanted a healthy choice, but nothing existed. When no one would create it for us, we decided to create it ourselves,” said Dyer.

Still, energy drinks have recently come under scrutiny both in and outside of the military. Dyer agrees that there is a problem, but he insists that his product is a healthy alternative.

“The military is cracking down on energy drink consumption, just as it should,” said Dyer. “The current offerings for energy drinks while possibly safe when used as directed, certainly aren't healthy. RuckPack isn't an energy drink, it's a peak performance nutrition shot. It contains healthy ingredients that give you clean energy, as well as five other benefits: recovery, endurance, joint support, immune support and mental acuity.”

Perhaps more interesting then Dyer’s product is Dyer himself. He is not the stereotypical Marine, and credits his MBA (Master of Business Administration) degree at NPS with helping him to bridge the gaps between the two seemingly unrelated sides of his professional life.

“Getting back to NPS before coming home to USNA was absolutely necessary. It had been 10 years since being in the classroom environment where the objective wasn't airstrike coordination or close air support,” said Dyer. “As for RuckPack, my time at NPS helped me collaborate with other MBA students on our off time. It's tough to find that many like-minded people in the operating forces,” said Dyer.

Dyer’s product has already garnered considerable attention. He appeared on season four of Shark Tank, a television program where contestants pitch their business ideas to a group of real millionaire and billionaire investors. Dyer was one of the few contestants selected by “sharks” Kevin O'Leary & Robert Herjevic. They not only accepted Dyer’s pitch, they doubled the amount of money Dyer asked for in return for a 20 percent stake in RuckPack.