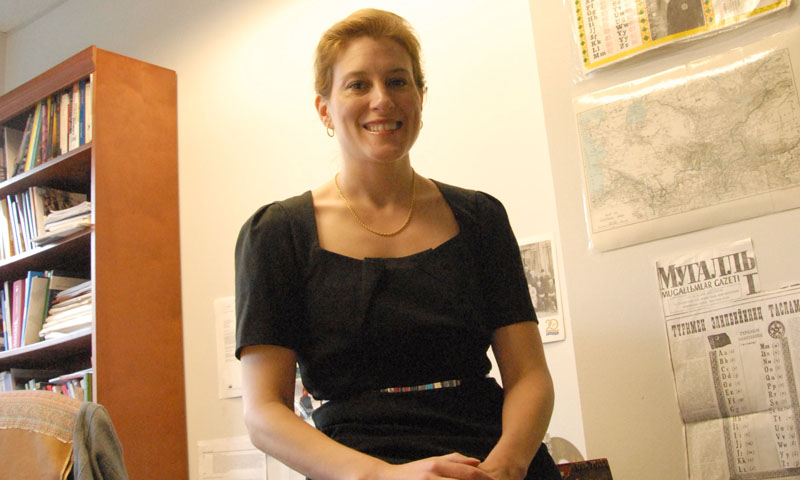 NPS Department of National Security Affairs Assistant Professor Victoria Clement was recently granted unprecedented access to the Turkmen National Archives for her studies into the relationship between language, power and education in Central Asia.

Nestled among the high plains, nearly impenetrable mountains, and black sands of Central Asia sits an ancient, but little known nation. Turkmenistan is one of the five countries of former Soviet Central Asia, and like its neighbors, it is struggling to redefine itself and take its place in the region and the world.

Naval Postgraduate School (NPS) Assistant Professor Victoria Clement has worked on issues related to Turkmenistan for 20 years. In addition to exploring its rich history and culture, Clement is interested in the intersections of political and social power and their relationship to education. To further her studies, she was recently granted the honor of being only the second non-Turkmen ever granted access to the Turkmen National Archives.

“Language and the press are the lenses through which I currently look at how power is shaped,” said Clement. “One of the things I am looking at in my work is the change in alphabets, the competition between Russian and Turkmen for dominance, how have culture and language policies been administered by the state?”

Clement is a historian with a background in Near Eastern languages and civilizations as well as Russian history, but there are not many places for researchers to explore the regional dialects of modern Turkmenistan … To do that, you have to live among the Turkmen. Leaving the secure walls and professional security that protects U.S. diplomats and aid workers is no easy feat.

“It helps that I speak Turkmen, not many foreigners speak their language and they take it as a sign of respect for their culture that I have learned it,” said Clement. “Turkmen people took me into their homes without asking anything from me.

“My living conditions were quite nice, the International Research and Exchange Board rented an apartment for me, in the past I have lived with various families which facilitated my learning the language,” continued Clement.

By abandoning the layers of security and the gated communities frequented by diplomats and aid workers, Clement was able to immerse herself in Turkmen culture. She benefited from the Turkmen penchant for hospitality and was able to forge strong ties with the local government, earning the trust of her Turkmen colleagues.

“Turkmen have always received me with the greatest generosity and hospitality,” said Clement. “Hospitality is a pillar of Central Asian culture … When taxi drivers learn that I am a foreigner, on many, many occasions they have offered to waive their fees because they consider me a guest in their country. I have been invited to weddings, birthday parties, and many family events … They know me and my work.”

In addition to university and archive administrators, Clement worked closely with members of the U.S. State Department in Turkmenistan. Her ability to interact with the local population offered state department officials rare insights into Turkmen culture. She also benefitted from the seasoned diplomats at the U.S. Embassy.

“I was able to have lunch with Ambassador Patterson and speak casually about Turkmenistan over the last 20 years; how I have watched it change or stay the same,” said Clement. “I met with several members of the embassy … I learned from them as much as they learned from me.”

Clement set out to help embassy personnel to see Turkmenistan in the manner in which Turkmen see themselves.

“My role, in addition to working on education, was to talk to the diplomatic corps about what everyday life is like in Turkmenistan … Members of the State Department do not have access to average Turkmen,” said Clement. “They do not have the ability to just chat with people or go to their homes … a lot of what I brought to the table was a richer and deeper perspective on daily life.”

But Clement is not just looking at the daily lives of Turkmen. She is looking at the evolution of an entire society. Turkmenistan is a nation in transition, its colonial past, Soviet era experiences and eventual independence offer a rare window into the use of language and culture as political mechanisms.

“One of the things that is interesting is the degree to which people have abandoned Russian and Soviet culture after independence,” said Clement.

“The U.S. hopes to see stability in Central Asia, and education is the foundation of social stability,” said Clement. “Education in Turkmenistan has been so fragile for so long that it has threatened a generation of human capital.

“They reduced the number of years of schooling under the last president and teachers were poorly paid. Now schooling is back to normal standards and teachers are well paid. Education has suffered, but the Ministry of Education of Turkmenistan is in the process of reforming its curricula,” continued Clement. “The State Department finds value in my research because they see how important education is to the security of the region.”

Clement will be returning to Turkmenistan in the spring to attend a young scholars conference. Her findings are set to be the subject of an upcoming book titled, “Learning to Be Turkmen: Literacy, Education and Power, 1913-2006.”