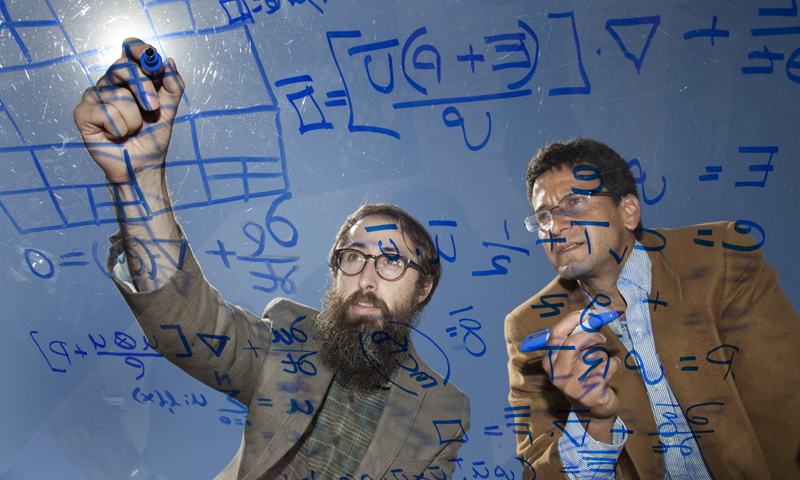 After several years of advanced research, NPS Department of Applied Mathematics Professor Dr. Frank Giraldo, right, and his Nonhydrostatic Unified Model of the Atmosphere or NUMA is inching closer and closer to possible multi-agency adoption. Over the past several months, Giraldo and Assistant Professor Lucas Wicox, left, have been reworking NUMA to capitalize on advancements in graphic processing unit technologies, resulting in National Oceanographic Partnership Program sponsorship.

Naval Postgraduate School (NPS) Professor of Applied Mathematics Dr. Frank Giraldo has been working for several years on a complex weather prediction tool, the Nonhydrostatic Unified Model of the Atmosphere or NUMA, which he and his team members hope will be adopted as the nation’s preeminent multi-agency weather prediction model.

“Our work is targeted at providing weather prediction for the Navy and all of the various agencies who are looking to adopt a single model,” said Giraldo.

While he is a mathematician, not a meteorologist, Giraldo insists that his seemingly circuitous route to the science of weather prediction isn’t really indirect at all – for it is all in the math.

“Atmospheric conditions can be predicted using compressible gas dynamics equations,” said Giraldo. To the untrained eye, these chains of equations are, at best, mind-numbing. But to Giraldo they are beautiful, and they are scrolled upon the whiteboards of his NPS office like the photographs of loved ones.

Although the work has been ongoing for some time, NUMA has generated considerable interest and momentum in recent months. The Korean Institute of Atmospheric Prediction Systems (KIAPS) is seeking to use NUMA as a prototype for the Korea Meteorological Administration (KMA).

“They are a great organization with tons of fresh researchers hungry for research that can help us to get NUMA where it needs to be,” said Giraldo, who will be traveling to Korea in September to conduct further research and strengthen the NPS-KIAPS partnership.

“KIAPS is a nine-year, project-based institution and our mission is to develop Korea's next generation operational numerical weather prediction (NWP) model,” said Dr. Tae-Jin Oh group leader of the KIAPS’ Dynamical Core Team. “Our product will eventually be used operationally by the Korea Meteorological Administration.”

KIAPS researchers began investigating dynamical core development trends and state of the art NWP  models in 2011 as part of their model development strategy.

One of the most critical issues in modern NWP model development is the problem of scaling to hundreds of thousands of central processing units (CPU) that are necessary to make NWP models work effectively.

“CPU clock speeds are no longer increasing because of power constraints and it is likely that the computer industry will move towards increasing the number of cores radically to enhance computer performance,” said Oh.

According to Oh, this creates a problem because most modern NWP systems are based on latitude-longitude grid systems and require global communications, which by design, do not work well with massively parallel computers. It also becomes an issue when considering the cost of operating thousands of parallel systems.

“Many institutes are building models with innovative grid structures that do not have pole singularities, among the next-generation models that are being developed worldwide, NUMA is particularly interesting because it exhibits unprecedented scalability performance,” said Oh.

But it’s not just the platform that makes NUMA interesting to researchers like those at KIAPS.

“NUMA has many novel features that caught our eyes … Its unified CG/DG [continuous and discontinuous Galerkin method] treatment; AMR  [Adaptive Mesh Refinement] capability; 3D element structure; support for many time integrators, and its grid structure flexibility,” said Oh. “Currently, we are working with Professor Giraldo on modifying NUMA so that it would become more compatible with established physical parameterization packages.”

Also part of the excitement stemming from the NUMA model is its recent incorporation of research into graphic processing unit (GPU) technology. Assistant Professor Lucas Wilcox with NPS’ Department of Applied Mathematics is working with Giraldo to harness the computational power of GPUs within the NUMA model.

“I joined the department about a year ago, I worked previously at the University of Texas on applying similar mathematical techniques to GPU technology,” said Wilcox. “Frank and I thought it would be interesting to apply these techniques to weather prediction.”

GPUs are processors that were originally designed for graphics, but Wilcox has demonstrated that they can be exploited to conduct complex mathematical equations as well.

"Only a small portion of modern CPUs are used for the floating-point computations found in NUMA, the rest of the chip is dedicated to running serial programs such as Microsoft Word fast," said Wilcox. "The GPU is a different technology, it is designed to crunch numbers in parallel fast ... We want to develop a version of the NUMA codes that can run on GPUs and then push those codes upstream into the main version of NUMA."

All of this computational power is necessary due to the complexity of what Giraldo is trying to replicate. He has to account for huge areas of atmosphere and replicate their conditions using mathematical formulas. As he increases fidelity and looks at ever-smaller swatches of atmosphere, the code becomes more complex and has to account for an increasing number of variables.

“Think of it like Google maps, if you zoom out you can’t see your house, but if you add more and more resolution you will be able to see your home … As you increase the resolution something has to give, you either have to increase your memory or time allotted for the equation, so we split the problem over multiple systems to increase resolution and speed,” explained Wilcox.

In an additional vote of confidence, NUMA recently received National Oceanographic Partnership Program (NOPP) sponsorship. The grant was offered in response to a proposal by Wilcox and Giraldo to rewrite the NUMA code in order to take advantage of GPU computational abilities.

“We now have a different level of expertise utilizing GPU architectures,” said Giraldo. “NOPP likes that we are going to use our code to show you what can happen if you use GPU technology right.”

“I want to develop versions of the NUMA code that can run on the GPU and develop tools that allow other researchers the ability of pushing their codes into the GPUs as well,” said Wilcox. “This is a multi-institutional effort to develop codes like those that make NUMA work and put them onto a GPU.”

If successful, recent work with NUMA and GPU technology may lead to developments beyond the scale of weather prediction.

“We are also looking at how we can apply these same numerical techniques to model earthquakes,” continued Wilcox. “We intend to publish our work open-source so that other researchers can apply it to other models.”