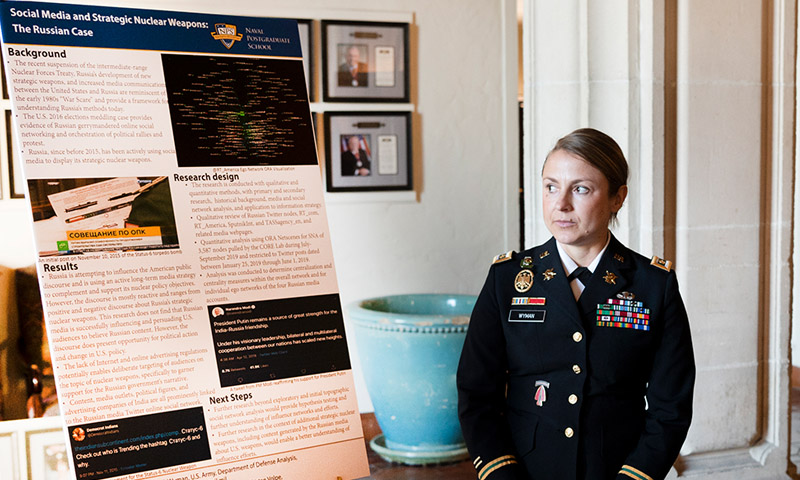 Russian meddling in the United States’ affairs gained media attention in the U.S. following the 2016 presidential election, but the superpower has been manipulating foreign media for decades, says U.S. Army Maj. Trisha Wyman, a recent graduate of the Naval Postgraduate School (NPS). Her thesis, through the university’s Department of Defense Analysis, thesis focused on Russia’s calculated dissemination of nuclear strategy propaganda via Twitter to strike fear and encourage conflicting viewpoints in Americans. It’s difficult to definitely say U.S. residents have fallen for Russian bots and trolls, says Wyman, but they may be successfully confusing the facts surrounding U.S. and Russian nuclear capabilities.

Wyman has been fascinated by Russia and Soviet Union history for a long time, but she never did any formal research on it until her undergraduate thesis which focused on the Soviet-Afghan War. She then was assigned to the U.S. Army’s Security Force Assistance Foreign Weapons Course, which naturally involved understanding at Russia’s weaponry.

Adversarial threats are not just in physical weapons anymore, of course, so for her NPS master’s thesis, Wyman additionally chose to examine open source information of Russia’s use of social media to infiltrate organizations, as Russia has historically done.

“Here, my studies focused not just on data analysis but also on counterproliferation,” she explains. “So basically, the nexus of my interests fell into this research topic.”

In her thesis, Wyman dove into the history of Soviet Union and Russian use of media manipulation to persuade policy and public opinion in other countries. She found India was a susceptible playground for Russia's media and internet organizations to try different propaganda techniques and bot technologies. Because of the invention of the Internet and Wild West social media channels, Moscow has poured money into their “cybernetic” strategies.

Wyman specifically looks at how Russia strategized the media attention around their Status-6 (also called Poseidon or Kanyon) -- an autonomous, nuclear-powered and nuclear-armed underwater vehicle under development. Information on Status-6 was “accidently” leaked by Russian media on Twitter in 2015, and Russia used methods and principles of authority, scarcity, channeled attention, threats and sexual lures to create a larger-than-life image of the weapon.

Information spread by Russian media, bots and trolls suggested Status-6 would soon have the capability to blow up the whole U.S. East Coast. While U.S. policy statements of Status-6 prior to the leak suggested the weapon was still many years away from being effective, Wyman says, this information didn’t circulate as seemingly well as Russia’s misinformation.) Wyman says Russia’s goal was to give the impression that Russia was a nuclear powerhouse Americans should fear. They want Americans to think that the cost of going to war with Russia would be too high to consider.

The reveal of Status-6 flared up the pro- versus anti-nuclear weapons conversation in the U.S. and made the Intermediate-Range Nuclear Forces (INF) Treaty between the U.S. and Russia appear weak to some Americans. When the Trump Administration pulled out of the treaty last year, it not clear whether or not the Russians’ campaign influenced the choice. But, as Wyman notes, it is a potential indicator of Russia’s cybernetics being successful in swaying a populace’s perceptions.

Russia has focused its effort and resources into this net-warfare, Wyman reports. In her thesis, Wyman tracked reach of different Twitter accounts believed to be run by either potential Russian Internet Research Agency (IRA) bots Russian media itself or trolls.

Although gaining large amounts of Twitter data proved difficult, the data Wyman did gain via the NPS Common Operational Research Environment (CORE) Lab informed her research on the topic. She found Russia’s methods to stir up trouble via Twitter concerningly effective. Surprisingly, she says, research on this topic was few and far between.

“I think studying what they’re doing in the information space is extremely important to understand what they’re trying to achieve,” Wyman urges.

She found that it’s easier for Russia to spread a narrative because of their media censorship and their authoritarian nationalism. While she emphasizes the importance of America’s freedom of speech, she says it makes it hard for the U.S. to develop a centralized message throughout its social media platforms. A lack of centralized image along with a lack of social media laws can make it difficult for the U.S. to get on top of the netwar.

“Whoever is going to maximize synchronizing and having a common narrative that’s consistent and persistent, I think is really going to dominate and win [the netwar],” Wyman says.

Wyman plans to keep an eye on this research field as she continues her Army service. She’s currently a visiting scientist at Lawrence Livermore National Lab until she begins her next assignment in the summer. She hopes more people will take up this research topic for the sake of national security. Personally, she intends to use what she’s learned to educate her future soldiers and teams about Russian information warfare.

“I will be able to apply what I’ve learned with social media, data analytics and social network analysis...really everything from my research,” Wyman says. “I’ll be able to look at my research methodology and apply that to problem sets in the future and, of course, enable my soldiers and my teams to do the same thing.”