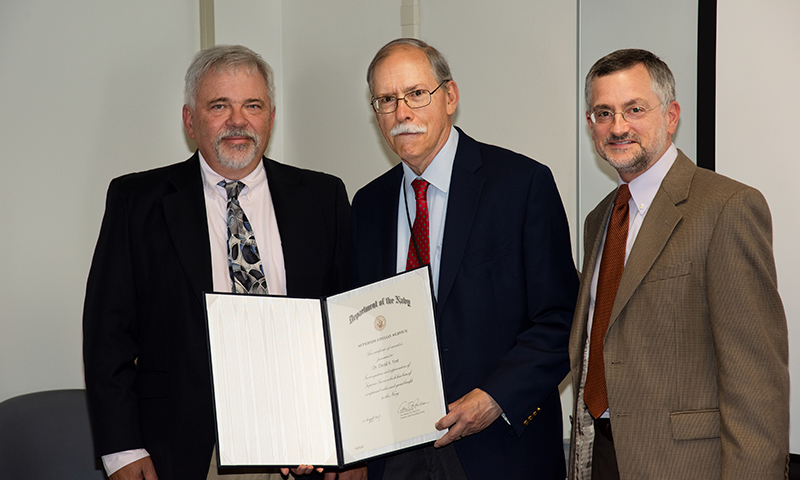 Honoring his service to the university and department, Dr. Jim Wirtz, Dean of the School of International Graduate Studies and Dr. Clay Moltz, NSA chair, presented Yost with the Navy’s Superior Civilian Service Award during an informal ceremony in Glasgow Hall.

Yost began teaching in the NSA department in July 1979. He has taught nearly 2,000 graduate students and advised over 170 thesis students, making lasting contributions to their intellectual development.

“I feel most grateful and privileged to have taught at NPS. For many reasons, I admire my students and colleagues,” said Yost.

Yost’s prolific scholarship includes authoring 12 books and 120 articles, book chapters and conference proceedings. He is recognized on the international stage as a leading expert in security studies and French foreign and defense policy.

“Prof. Yost is a legend among former students, many of whom recollect decades later about his great care and helpful suggestions on their theses,” said Moltz.

“Among his colleagues, David is known for his unfailing politeness, his impressive attention to detail, and his occasionally wry wit,” added Moltz. “David leaves big shoes to fill in the European security field, having taught almost two generations of NSA department students.”

Yost’s award citation stated that he consistently served as an academic associate in the department and chaired numerous tenure and promotion committees. His exceptional ability to act as a rapporteur was evidenced in his service to the Defense Policy Board and the Nuclear History Program at Harvard University. He also delivered scores of invited presentations to both government and academic audiences which are particularly noteworthy, enhancing the reputation of NPS.

While Yost’s reputation and scholarship are impressive, he was first and foremost a teacher. He relished in imparting his knowledge of world affairs and also in learning from his students as they returned from the operational world to foster robust classroom discussions.

“My happiest teaching experiences have been the lively class discussions in which the students learned from each other and gave me insights as to what is professionally useful to them,” said Yost.

Yost is also looking forward to retirement and is endeavoring to continue writing on various themes to add to his already prolific portfolio.

“I have several writing projects that I am eager to turn to.  The topics range from France, NATO and nuclear deterrence to more general questions about international relations and political philosophy,” said Yost.