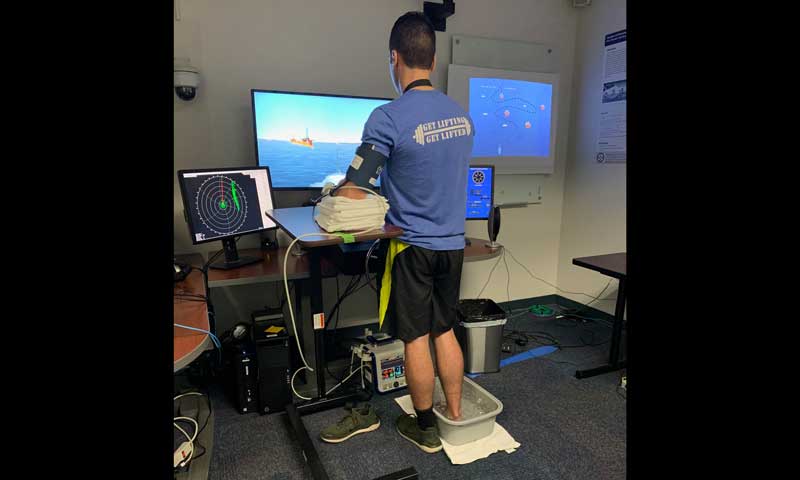 A participant operates a ship driving simulation module while placing his bare foot in ice water for a stress inoculation study.

NPS Department of Operation Research students Lts. Lindsay Clements and Clarese Neill are performing a series of experiments looking into the effects of stress training on learning retention.

Clements and Neill had 50 participants use a ship driving simulator to pilot a ship, with no prior experience, while subjecting their body to an external stressor, like placing their bare foot in a bucket of ice water.

“Research shows that any type of stress, whether it's a physical stressor or a mental stressor, produces all the same signs in your body,” stated Clements. “Essentially, if someone's standing there yelling at you that you need to turn the ship this way or that way, or if you're in a collision situation, the same things are happening in your body as if you're sitting in here putting your foot in a bucket of ice water.”

Participants were placed in three different groups with each group receiving varying degrees of stress training prior to their first run on the simulator. The first group of control subjects received no stress training during their initial course run, and no stressor was applied. The second group used a cold-water perfusion system on their bare lower back during their first run to receive a low-level stressor, while the third group was exposed to having their foot in the ice water during the entire initial run.

The two variable groups also viewed a stress training video before completing the initial task that instructed them to control their breathing and focus on the performance measures of the ship driving task they were about to perform.

Participants had several vitals monitored during each run, to include blood pressure, heart rate and even electro-dermal activity, meaning the sweat that formed on their hands. Along with their vitals, a saliva sample was taken so that physiologist Dr. Heather Clifton could measure their cortisol levels.

“We don’t expect the Navy to start dunking Sailor’s feet in water during training,” said Neill. “However, a cold compress on the small of the back is another method that is much more applicable to the Navy and could easily be implemented.

“If we can help to prove the idea of stress training, then someone can do follow-on work and we can just hope to improve the quality of our ship drivers,” continued Clements.

Clements and Neill cited the two collision incidents of 2017 as a backdrop for their research. Training since has improved, with Sailors learning what to do in emergencies over and over again. But what about training while actually under stress?

“We're taking this very basic concept of inducing stress while training so that if a situation like this happens again, those Sailors can be ready,” Clements said.

The two-student team has completed the data collection portion of the experiment, now they must analyze the data to find if there is a correlation between the type and amount of stress training received and the performance under stress.