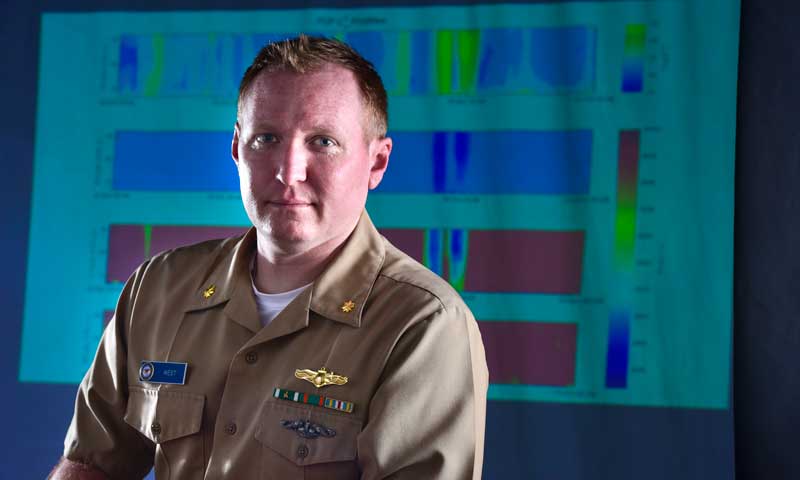 “Lasers are the future of U.S. Navy shipboard defense.”

A straightforward statement, but it was all the motivation U.S. Navy Lt. Cmdr. Austin West needed to tackle a highly-challenging research topic for his master’s degree on Meteorology and Oceanography from the Naval Postgraduate School.

A member of the 2021 Spring Quarter graduating class, West’s thesis examined the atmospheric effects of the maritime environment on the Navy’s High Energy Laser Weapons System (HELWS), and how adaptive optics could compensate for those effects making the futuristic weapons system more effective.

As a METOC officer (Meteorology and Oceanography) West combined his operational specialty with NPS’ cutting-edge curricula to deliver impactful research with immediate application to one of the Navy’s high-priority defensive capabilities under development for the Fleet.

And he was recognized, significantly, for his efforts … Announced just before graduation, the Navy League of the United States awarded West with the prestigious Parsons Award for Scientific and Technical Progress.

“The Navy League of the United States is honored to sponsor the 2020 Rear Admiral William S. Parsons Award for Scientific and Technical Progress,” said Navy League CEO Mike Stevens, who previously served as 13th Master Chief Petty Officer of the Navy. “We are proud of Lt. Cmdr. West for the receipt of this award. We are also grateful for his contributions to the scientific community. He is an outstanding example and what makes NPS and U.S. Naval forces second to none.”

The Navy League first awarded this honor in 1957, and has been on the quest to honor the Navy’s top scientists ever since. The award is given every year to a U.S. Navy or Marine Corps officer, enlisted or civilian who has made an outstanding contribution in any field of science that has furthered the development and progress of the Navy or Marine Corps.

“My research focused on modeling how different types of atmospheric effects impact the laser propagation, such as environmental absorption, scattering, and turbulence,” described West. “The Fleet is starting to see these weapons systems arrive aboard ships, and they need to understand when and how they can operate, and how atmospheric conditions will impact their system performance. So I looked at how lasers perform under these effects, and researched how much adaptive optics can correct for them.”

The tactical advantage of adaptive optics is significant, West explained, capable of accounting for and correcting the impact of a constantly-changing atmospheric  environment near the surface.

“[The research] was such a cognitively tactile experience,” said West on working with high energy lasers, and working with his faculty advisor, Dr. Qing Wang. “I thank Dr. Wang, and the entire NPS faculty and staff who helped me develop the conceptual model that I applied to this research. You were the foundation that was the nexus necessary to understand the complexities of such a multi-disciplinary field such as high energy lasers through the atmosphere.”

West also thanked the METOC community for supporting higher education so that officers like him can perform critical research, and develop critical skills, that provide a high-return on the educational investment.

“Having just graduated, I am prepared to return and relieve the watch,” said West. “Hopefully I’m armed with more than just memorized equations and formulas, but creative and structured critical thinking skills that will allow me to not just tackle the problems that are emerging on the horizon, but those unforeseen ones that are coming tomorrow.”

West joins a highly-accomplished community of Parsons Award winners, many of whom are also NPS graduates. Parsons himself graduated the university with a degree in ordnance engineering, and was instrumental in developing the variable time fuse which is still in use today, as well as making notable contributions to the Manhattan Project in World War II.

Retired Adm. John H. Sides, considered to be the father of the Navy’s guided missile program, and Rear Adm. Wayne E. Meyer, coined the Father of the AEGIS program, are also NPS graduates who have received the award.

“[West’s] research reflects one of the unique aspects of NPS,” said NPS Dean of Students U.S. Navy Capt. Markus Gudmundsson. “Students bring their own operational experience to classrooms and laboratories to collaborate with defense-focused faculty to solve key, operational problems with technical solutions. This produces two critical products … New capabilities for the fleet, certainly, but even more importantly, naval leaders who are exceptionally well qualified to acquire and deploy advanced naval warfare capabilities.”