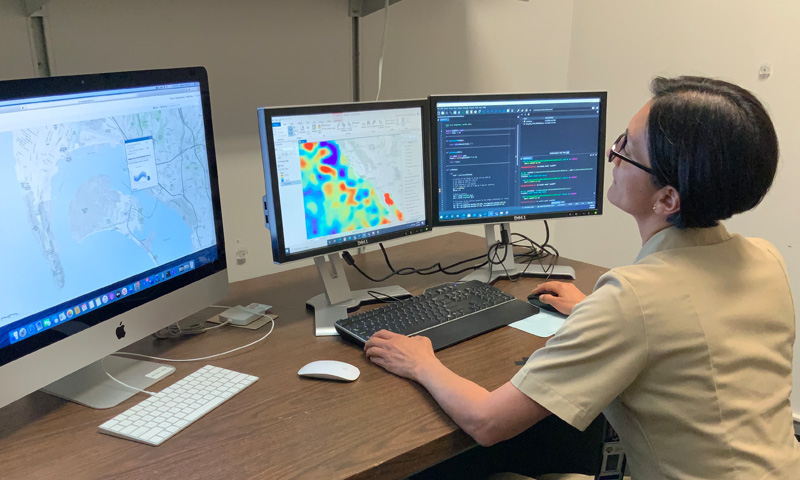 NPS student Lt. Monica Killoran is exploring the implications of possible sea-level rise on Naval Base San Diego through an analysis of tidal fluctuation based on years of collected data.

For the large number of naval bases located on an ocean’s coast, the prospect of sea level rise (SLR) poses a real potential threat, especially since a rising sea doesn’t necessarily impact everywhere the same way. There are many variables to consider, such as the local coastal geology and geography, as well as tide fluctuations and meteorological events.

While the Naval Oceanic and Atmospheric Administration’s (NOAA) global SLR maps do well at projecting generally the fate of the coastline after a certain amount of warming, there is a need for more detail, both in space and time, to aid in planning adaptive measures.

“We want to try to capture what could happen if it gets to a specific level,” Killoran explains. “It’s particularly interesting to try to mix the two things because connecting the dots is what helps us to understand how things are.”

In a way, she mixed four of her own interestswith the projet … meteorology, oceanography, climate change, and the Navy. She was inspired by an NOAA presentation she watched at the 2020 ESRI Ocean, Weather, and Climate Geographic Information System (GIS) forum, where a graduate student presented work similar to her project.

Killoran is trying to create a code that can calculate SLR variability for a certain area once the user plugs in standardized SLR projection data from NOAA and NASA and local tide measurements. Both agencies get their data from altimeters, which are instruments that can measure the height of sea surface from space.

Killoran’s research is funded in part by the Naval Information Warfare Center (NIWC) Pacific, and there is a significant amount of pre-existing data available for her to use. Although still in the early phases of her work, Killoran hopes to develop a tool and methodology that other bases can easily duplicate.

“I think of the research like an hourglass,” Orescanin says. “We’re kind of in the information-gathering stage, trying to figure out how much of this has been done already in academia and industry, like how many cities and ports and harbors are planning for things like sea level rise and what steps they are pursuing to make those decisions.”

Killoran chose San Diego to be her first location because the base is closer to Monterey than other candidate installations, and the base has been collecting years worth of tide measurements. As she dives into her research question, Killoran says she is excited to be working on something that will both challenge her, and matches with her own interests.

“[Faculty] allow us to go for it if it’s what we want to do,” Killoran says. “Everybody has been so helpful, and I didn’t know there was so much information and resources available.”

Killoran already has other Naval installations in mind that would be good places to explore sea level rise in detail, including Norfolk, Pearl Harbor and Yokosuka.

“There is, in my opinion, probably a lot of room for students to run [with this topic] down the line,” Powell says.