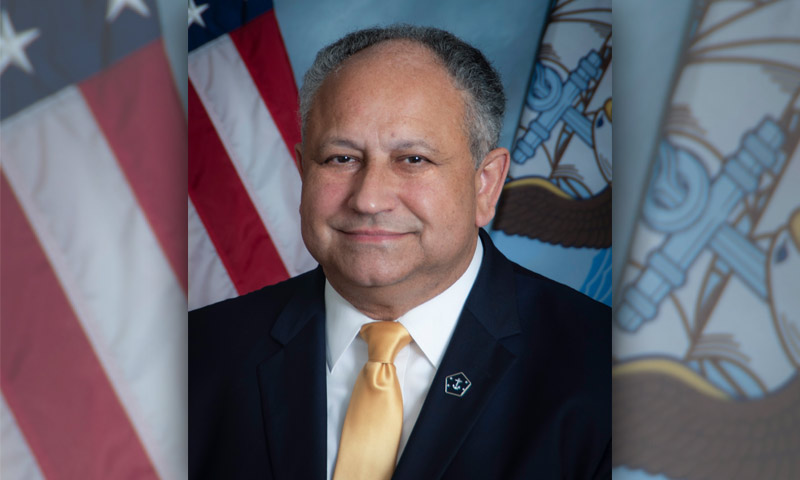 Naval Postgraduate School (NPS) Space Systems Engineering alumnus Carlos Del Toro was sworn in as the nation’s 78th Secretary of the Navy, August 9. Del Toro, who is also a graduate of the Naval Academy and Naval War College, served 26 years in uniform followed by 17 years as CEO and President of a private sector firm.

Naval Postgraduate School (NPS) alumnus Carlos Del Toro was sworn in as the nation’s 78th Secretary of the Navy, August 9. Del Toro served 26 years in uniform followed by 17 years as CEO and President of a private sector firm.

A 1989 graduate of NPS’ Space Systems Engineering master’s degree program, Del Toro brings a keen understanding of the value of advanced education, applied research, and technological leadership as the United States and the world grapple with the challenges presented by peer adversaries. In addition to his graduate degree from NPS, Del Toro also holds master’s degrees in national security and strategic studies from the Naval War College and legislative affairs from George Washington University.

“As a graduate of the United States Naval Academy, the Naval Postgraduate School, and the Naval War College, I understand the importance of, and I have benefited from, professional military education,” he told the Senate Armed Forces Committee during his confirmation hearing, July 13. “PME is a necessary investment by the Department of the Navy to improve readiness across the force. PME reforms should concentrate on creating a relevant and challenging learning environment for officers and enlisted Sailors and Marines that is responsive to emerging threats.

“PME is a necessary investment by the Department of the Navy that improves readiness across the force by developing critical and creative thinkers,” Del Toro said recently. “Any PME reforms should concentrate on fostering a realistic and challenging learning environment, operating within a continuum through the progression of ranks for both officers and enlisted Sailors and Marines, ultimately preparing them for emerging threats.”

NPS President retired Vice Adm. Ann E. Rondeau offered congratulations to Del Toro on behalf of the NPS community, adding that she is eager to show Del Toro how far NPS has come since his time here as a student and the exciting future ahead as the institution sets out on a transformation vector to maximize its impact for and in support of the Naval services.

“To prevail in Great Power Competition, we must adapt and lead at the pace of technology to accelerate our advantage at sea. NPS is positioned to do that for the Fleet and Force, and transformation will further enable us to help our Navy and Marine Corps,” she said.

“Secretary Del Toro fully understands this challenge through his brilliant entrepreneurial leadership success as well as through his distinguished career in the Navy, including his studies at NPS. In fact, when Secretary Del Toro received accolades for his warfighter relevant research when he studied electrical and computer engineering, his intellectual leadership was evident and cutting-edge.  His ideas were so far ahead at the time that his research thesis remains in the restricted collection of the NPS library,” she continued. “What was clear to NPS faculty was then-Lt. Del Toro’s energy toward addressing important and relevant problems and developing solutions. He exemplifies the decisive advantage that warfighters bring to application of knowledge.”

Del Toro’s NPS thesis explored the utilization of bubble memory to capture satellite telemetry data, with NPS Distinguished Professor Dr. Rudy Panholzer, former Chair of Space Systems Academic Group, serving as his thesis advisor. Del Toro’s diligent and focused academic work made an impression on his professor, who stayed in touch with him years after graduation.

“I was not surprised to see [Del Toro] achieve success in his career, whether it was on active duty, in private industry, and now in senior civilian leadership at the Pentagon,” said Panholzer. “I recall him being remarkably diligent, motivated and inquisitive. He was a true self-starter who was always upbeat and positive.”

Del Toro now brings his education and wealth of experience to his new role as Secretary of the Navy at a time marked by heightened tensions with China and fiscal constraints. During his confirmation hearings, he articulated his vision, vowing to be “exclusively” focused on China while meeting the 355-ship goal set by Congress and investing in emerging technology.

“As our nation shifts from a land-based strategy over the past 20 years fighting the wars in the Middle East to a more dominant maritime strategy in the Pacific, particularly in our efforts to deter China, I do believe that our Navy and Marine Corps team will need additional resources to be able to fully field the combat effectiveness we will need as a nation,” he said.

“China continues to develop sophisticated military capabilities to include surface, air, and undersea platforms while demonstrating aggressive behavior that flouts the rules-based order, threatening regional stability and security,” Del Toro added. “I believe that it’s imperative to make the right investments and modernization.  We can’t continue fighting the wars of yesterday; we have to work toward fighting the new wars of tomorrow.”