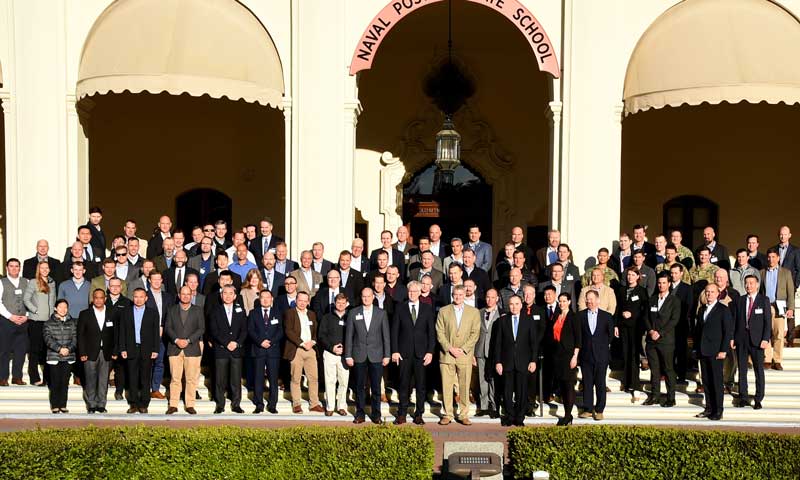 Academics, warfighters and representatives from the U.S. and its allies and partners from Asia and Europe stand together at the Trans-Regional Resistance Working Group (TRWG) on the NPS campus Feb. 4-6. The Naval Postgraduate School and Special Operations Command, Pacific (SOCPAC) co-hosted the TRWG to create an open environment for the U.S. and its Indo-Pacific partners to talk about how resiliency and resistance can play a role in national sovereignty.

Designed to create an open discussion environment for the U.S. and its Indo-Pacific partners, the Naval Postgraduate School (NPS) and Special Operations Command, Pacific co-hosted a Trans-Regional Resistance Working Group (TRWG) on the NPS campus to talk about how resiliency and resistance play a role in national sovereignty in the Indo-Pacific region, Feb 4-6.

Academics, warfighters and representatives from the U.S., Asia and Europe, as well as faculty and subject matter experts from NPS’ Defense Analysis and National Security Affairs departments, U.S. Naval War College, National Defense University and Joint Special Operations University converged to hear keynote speakers, panel discussions and engage with one another about resilience and resistance strategies for strengthening sovereignty amid other rising powers.

“Resilience and resistance in the era of Great Power Competition is part of our National Security Strategy,” said Dr. Doug Borer, Associate Professor and academic co-chair for TRWG. “These themes are driven by the idea that many of our international partners and allies, and many of their neighbors, are dealing with how to confront, deter or think through the problems of aggression. A nation’s level of resilience and resistance can raise an aggressor’s cost calculus and can have potential for deterrence.”

During the talks and engagements, speakers and panelists expressed ideas, concepts and strategies for resilience and resistance in topic areas such as territory control, information campaigns via mass and social media, and cyber warfare.

According to Dr. Patricia Blocksome, an NPS assistant professor for National Security Affairs, resistance and resilience are not new concepts, and their implementation in this current era is likely to focus on different domains and methods than were used by other adversaries or in other eras of competition.

“Finding answers to today’s challenging strategic environment is a difficult endeavor,” says Blocksome. “This event provided participants with an improved understanding of how to think about the questions of strategy in great power competition, as well as raised new questions that will need to be answered as these nations move forward.”

Between keynote speakers and panel discussions, participants entered into groups discussions where face-to-face dialogues allowed representatives and warfighters to share their experiences and their challenges.

“One of the key takeaways was that there are other countries to learn from,” said Borer. “Sweden, Finland, and Norway have historical knowledge and experience from past aggressors, and even though what worked for them may not necessarily work today in the Indo-Pacific region, but one country could learn from another and adapt those lessons for their own context.”

Borer asserted that NPS’ trusted international network was a key element to the success of the TRWG, while Blocksome pointed out the breadth of research and expertise brought together on the NPS campus, both historical and contemporary, were key components in this exchange.

“A distinct benefit of this event was that our partners from the Indo-Pacific were able to interact with our partners from Europe. Both regions are experiencing great power competition, so the ability to provide an opportunity for cross-regional dialogue on a spectrum of issues related to resistance and resilience was highly valued by our partners.”