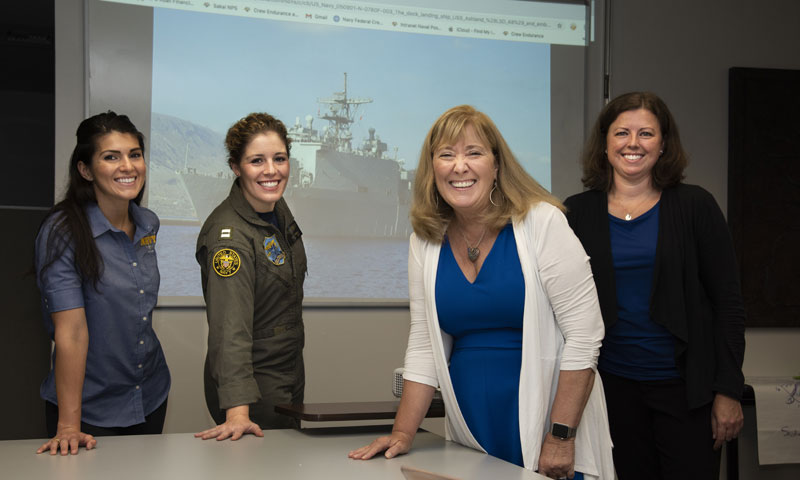 U.S. Navy psychologists, from left, Lt. Maria Greenwood and Lt. Heidi Keiser, joined NPS faculty Drs. Nita Shattuck and Heather Clifton, on a three-week transit on board the USS Ashland (LSD 48) in August. The team collected a range of biometric data on the crew, and their environment, in hopes of finding ways to optimize performance and endurance during high-tempo activities.

The Naval Postgraduate School (NPS) recently led a research mission across the Pacific Ocean which may vastly improve the Navy’s understanding of how sleep can boost crew performance during arduous amphibious operations.

Dr. Nita Shattuck, Crew Endurance Lead with NPS’ Human Systems Integration (HSI) program, headed up a team of Navy psychologists from across the Fleet in August for a three-week embed aboard the amphibious dock landing ship USS Ashland (LSD 48) as it sailed from Australia to Japan. Distributing 500 wristwatches Shattuck described as “Fitbits on steroids,” the team recorded critical biometrical data as the crew went about its business underway ... regular duties, standing watch, training, and even eating, recreation and sleeping.

“These watches collect activity. They’re basically accelerometers which pick up every slightest movement, including sleep,” Shattuck explained. “Every crew works hard, but until we measure this, we have no idea how hard.”

“This gives us the opportunity to know what is really happening with the crew,” she continued. “Are they getting sleep? How much, and what’s the quality of that sleep?”

The data they collected will further advance the pioneering work Shattuck and her NPS team have already accomplished in how the Navy fights the dangers of sleep deprivation.

NPS’ work in this domain has been featured in a wide array of national media outlets, including National Public Radio, National Geographic and Navy Times, and in 2017 led to a comprehensive policy change in the Navy when Vice Adm. Thomas Rowden, then Commander, Naval Surface Forces, announced the service would implement the HSI lab’s optimized watchbill program throughout the surface fleet.

“Warfighting and professional, safe operations at sea continue to be my top priorities; this order is consistent with those priorities,” Rowden noted in his official guidance at the time. “Circadian rhythm watchbills and shipboard routines will help produce well rested Sailors who are better warfighters, shipboard operators, and engineers.”

Getting to this point, however, took years of deep, sustained research for Shattuck and her team.

Never have they done so with amphibious assault ships - until now.

“People have told me that’s never going to happen on amphibs. They’re a different kind of animal, you can’t get there, and so on,” Shattuck said. “That’s because amphibs are especially challenging. Not only do they have sailing their ship and other typical stuff going on, but they also have to launch and recover aircraft and send off Marines.

“So, it’s not just one mission,” she continued. “It can be all these missions simultaneously, so the workload on the crew can just be wicked hard.”

To undertake this kind of study, the HSI lab called in the heavy artillery. NPS put out the word to the naval research community in early summer for additional Navy psychologists to support the upcoming field collection, and the response was not disappointing. Within short order, Shattuck assembled a crack team with representatives from the Naval Research Lab (NRL), the Naval Medical Research Unit - Dayton (NAMRU-D) and the Naval Aerospace Medical Institute (NAMI).

“The Navy research community is very small, so when opportunities like this come up to do a unique project or data collection, it’s usually kind of an all-hands email shout out to see who’s available,” noted Lt. Heidi Keiser, an experimental psychologist with NAMI who volunteered. “Dr. Shattuck’s team was looking for some Ph.D.s trained in this type of research and as soon as I heard about it, I thought it sounded awesome, so I jumped on it right away.”

Such collaborative efforts are a win-win for the Navy research community, according to Greenwood, and remind her why she went to work for the Navy to begin with. With a Ph.D. in neuroscience and a background in neuroendocrinology, she wanted to make a difference that a career in academia or clinical research would not necessarily afford.

“It felt very meaningful to me to get out of academia and work directly with subjects to actually have a direct impact on a community that research is meant to impact,” Greenwood said. “With such a small community, you have to build collaboration to make that happen, and coming into the Navy, I had an instant opportunity for the research that I’m doing to directly impact policy.

“The research that we’re collecting here is not something that I’m going to take back with me and work on myself, but I’m taking back the experiences and applying them to the research I am doing which is huge for my specific lab,” she continued.

The research team then spent the next three weeks with the ARG Wasp as it transited from Townsville, Australia to Sasebo, Japan, conducting operations along the way.

In addition to the wristbands, the group also collected all sorts of environmental data, including the kind of light crews were exposed to, the hours of daylight, how much light they got and when. This information was also supplemented with journals the team handed out to participants to fill in during transit.

“The idea is to have both the objective data that says, ‘This is what we think you are doing,’ and then match that with self-reported data [from participants] that says what they were doing over each day,” Shattuck explained.

It will take some time for Shattuck and her HSI team to analyze the data collected and fold it into their ongoing research, but at the end of the day the ball will be advanced.

“Navy-wide, our entire goal is to increase the performance, readiness, lethality and day-to-day experiences of those frontline individuals out in the fleet,” Keiser noted. “That’s what we’re all here to do. Whether we’re in different job titles or different locations, we use our research skills to make the Navy better and make lives better for those individuals who are out doing the work every day.”