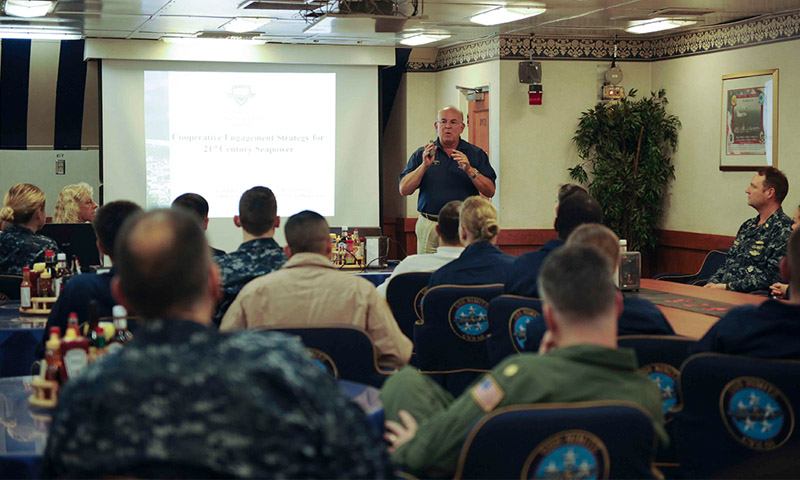 For more than two decades, the Naval Postgraduate School’s (NPS) Regional Security Education Program (RSEP) has provided leading subject matter experts to deploying forces in transit delivering on-site, graduate-level briefings on regional issues and challenges, historical and security context, and cultural sensitivities in Combatant Commanders Areas of Responsibility (AOR’s) and regions where our forces will operate. From carrier strike groups to SEAL teams, the RSEP program has delivered briefings and critical lectures to more than 500,000 Department of Defense participants worldwide as well as international allies and partners operating with our deployed Naval Forces.

The program was created in the aftermath of the events on Oct. 12, 2000 – a date that many Sailors will never forget. On that day, the USS Cole (DDG 67) docked in Aden, Yemen for a routine fuel stop. Not long after mooring, a small fiberglass boat carrying C4 struck the side of the ship, creating a 40-by-60-foot gash in the hull, killing 17 Sailors and wounding 37 others. The attackers were later identified as part of the terrorist organization al-Qaeda.

Then Chief of Naval Operations (CNO) Adm. Vern Clark asked all of his flag officers in the fleet how they could prevent anything like this from ever happening again. The Naval Postgraduate School had an answer: RSEP.

“When we first started the program in 2001, almost nobody could even spell al-Qaeda,” said retired Rear Adm. Steve Loeffler, fleet operations director for RSEP. “Now it is the life’s work of our professors and subject matter experts to be well informed on every issue, challenge and threat imaginable in their areas of expertise and deliver that knowledge to our deploying forces.”

As for today’s era, the recently published Tri-Service Maritime Strategy, which aligns the U.S. Navy, Marine Corps and Coast Guard to achieve “advantage at sea,” and the recently announced CNO NAVPLAN, calls for the Navy to contribute to regional security, and operate interchangeably with key allies and partners, are both necessary to attaining that advantage at sea.

Supporting these strategies, NPS has a network of 350 subject matter experts from across the country who specialize in different regions of the world. Dr. Wade Huntley, academic director for RSEP, is responsible for assembling the right group of people to brief deploying units.

“The program is there to support the interest of deploying Naval forces,” said Huntley. “Regardless of where the unit is heading, we will have a team ready to tell them everything they need to know about their area of operations.”

For example, RSEP has become a mainstay of “Academic Week” for deploying SEAL Teams. Whether teams need briefings on ISIS/al-Qaeda operations and other terror networks in the Middle East and North Africa, or Great Power Competition between nations in certain regions, or U.S. bilateral agreements in Southeast Asia and the South Pacific, RSEP will focus the discussion on where each force element will deploy.

“This is what we do,” said Huntley. “We create briefs about potential threats and regional challenges in areas of operations and provide them to anyone who will listen. We want our fleet to be prepared for anything.”

In a pre-COVID environment, the RSEP team would create dozens of briefs and then travel with deploying units and inform senior enlisted and officers on regional issues and challenges in the area of operations during their deployments.

“When we go aboard a ship, we might have a list of between 25-40 briefs that we offer and then we try to give all of those briefs over the course of their transits,” Loeffler explained. “During that course of time we would have given literally each of the lectures probably 5-10 times. We want to make sure they are prepared to accomplish the mission at hand.”

COVID-19 has certainly had an impact on how RSEP accomplishes its mission. While unable to travel with deploying units due to COVID-19, the team now prepares dozens of briefings and pre-recorded lecture videos that they send out and let the commanders, Sailors and Marines aboard organize the briefs.  Recent feedback from deployed strike groups, cruisers, destroyers and amphibious ships has been very positive as they use RSEP DVD’s to educate and train Sailors and Marines of all paygrades.  Similarly, symmetric briefs via collaboration tools with Selective Reserve units from around the fleet have resulted in comments such as, “Best drill weekend in years!”

“RSEP is the greatest and largest outreach program that NPS has ever had,” Loeffler noted. “Not only are we educating the fleet, but we are getting the word out about how important NPS really is to the Navy and Marine Corps.”