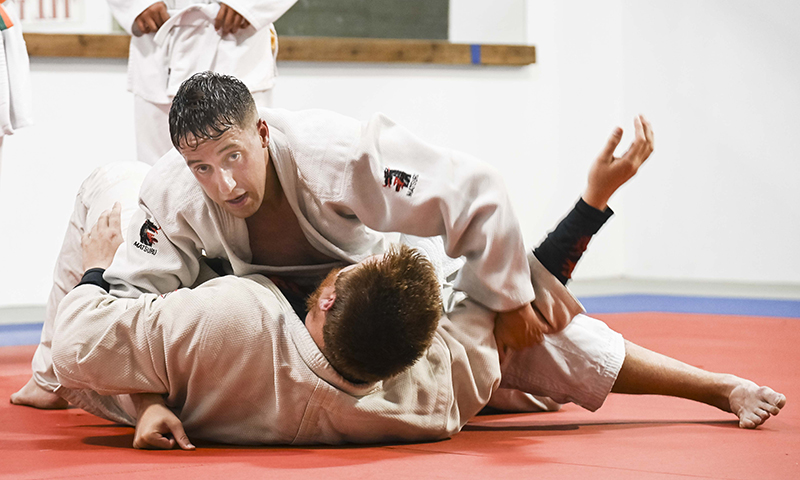 U.S. Marine Corps Capt. Ben Branson, a student in NPS’ electrical engineering program, demonstrates the takedown of an opponent to judo students during a class at Dojo Bojuka Ryu in nearby Marina, Oct. 19. Branson will be competing in the USA Judo National Presidents Cup Championships held this coming weekend in Irving, Texas.

It’s been a little over a decade since Branson won gold in the 2010 U.S. Junior Open Judo Championships in Fort Lauderdale, Fla., prior to joining the Marine Corps.

With two separate deployments to Afghanistan since joining the service, there was little time for Branson to practice, or find others at his level of knowledge and performance to practice with. Getting back into competition has been a long journey.

When he arrived at NPS, he quickly became a member of a local dojo, studying under Sensei Eddie Nakao, a master with 40 years of teaching in the discipline of judo and other martial arts. The two have become respected colleagues, as Branson now assists in teaching youngsters and teens technique at the dojo. He also found an opportunity to jump back into high-level competition.

“I competed for the first time in four years in May 2020 in Reno, Nevada, at the Senior Nationals. I went 2-2,” said Branson.  “I’ll be looking forward to getting some rematches in at this next tournament to the guys I lost to.”

Branson’s work ethic and commitment to the sport was instilled in him by his father who is also a judo sensei, and will actually meet Branson at the competition where they’ll both compete in separate divisions.

“My father was a sensei growing up in Anderson, Indiana, and [judo] was very much a part of my life. Both of my parents were there to support me in all those matches, and I enjoyed traveling with the judo club and competing in tournaments with the family,” he said.

Though quiet and unassuming, Branson applies an impressive level of focus, discipline and commitment to his many priorities … family, the Marine Corps, graduate studies and the upcoming competition.

“I’ll be ready,” he says with conviction. “It’s tough dividing time between family, master’s degree and trying to get ready, but for me getting ready and pushing myself will make me a better father and a better husband for my family. I want my kids to see how hard their dad pushes himself so they have an example of what hard work can do for them someday.”

Following the upcoming competition, Branson also has his sights on the next season of the Military World Games, which will be held in Germany in March 2022.