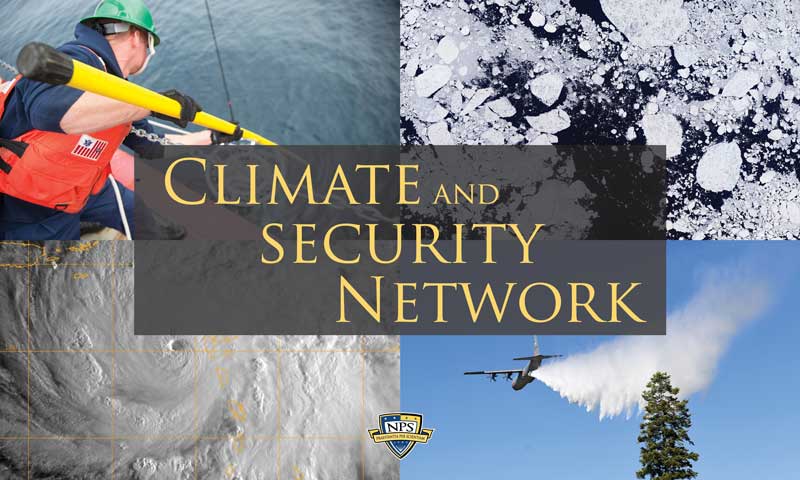 In response to DOD actions to address the security implications of climate change, NPS has launched the Climate and Security Network, bringing relevant expertise across campus together to support the research needs of the Navy and DOD, and to advance educational programs related to these issues.

On January 27, President Joe Biden signed an executive order to tackle climate challenges at home and abroad, which both elevates and frames climate concerns within a national security perspective. Responding swiftly, the Naval Postgraduate School (NPS) launched the Climate and Security Network, connecting NPS faculty with relevant expertise across campus together, along with staff, students and even alumni, ready to collaborate on important research and support related educational efforts.

The network was established March 12 to connect faculty, students and researchers at the university who are engaged in climate and security issues, and provide opportunities for interdisciplinary learning and problem-solving. In this way, the network bridges experts from different organizations, including the Meteorology and Oceanography departments, the Energy Academic Group, the Center for Infrastructure Defense and others. The network presents the collective, relevant expertise at NPS to the Pentagon, to help solve climate change challenges in the Navy and the Department of Defense (DOD) as a whole.

“We wanted to pull together the folks at NPS who are doing this work and to give them a way to collaborate easier on these issues, and to share information about their research and expertise,” said Kristen Fletcher, a faculty associate for research in the Energy Academic Group (EAG). “Someone in oceanography may be doing something that's particularly relevant to someone in systems engineering or national security affairs and meteorology.

“We also wanted to present this network to the Navy and DOD to help meet the mandates of these new executive orders,” she continued. “This is the research and expertise that NPS can bring to the table.”

NPS approaches climate change and its effects from many different angles, such as how can the university help develop new, or utilize already-discovered technologies, to reduce the greenhouse gases that the DOD produces? In other words, how can NPS help combat problems that climate change creates?

According to Dr. Tom Murphree, an NPS research professor in meteorology, NPS is the perfect place to study all things related to climate.

“We have people like me who deal with the science of change in the the physical environment,” said Murphree. “But then we have other people who focus on the operational impacts of climate change, and look at how climate change could destabilize countries. Other people take an engineering perspective and look at how we can engineer our bases, equipment, ships and planes so that we have less of an impact on the climate system.”

One of the first actions of the Climate and Security Network was to create a speaker series.

“We want to bring experts in from the outside who can give us different perspectives and then highlight for them the research that's going on at NPS,” said Fletcher.

Conger spoke about the adminstration’s executive orders on climate change and how it will affect the DOD. He spoke on the strategic advantages that come with studying changes in the environment, as well as the humanitarian benefits. After his presentation, he took time to answer questions from students and faculty.

“The benefit of having Mr. Conger kick off our Speaker Series is that he provided details on the Executive Orders and climate and security mandates of the Biden Administration and put it into context by drawing on his experiences at Department of Defense,” said Fletcher. “That helped spark discussions about how DOD will meet its mission in the future while considering climate and security priorities.”

The network is still in its early stages, but Fletcher has big hopes for the program. She said that while the first few speakers will be from external sources, by the summer, it will focus on research conducted by NPS students and faculty who can share their expertise with the Navy and Department of Defense.

The creation of the Climate and Security Network is a step forward for NPS in climate and security, highlighting the work that has been conducted here for decades.

“My hope is that the network will advance the research and expertise from NPS that goes back decades, both in terms of scientific expertise as well as security policy,” said Fletcher. “By integrating climate and security issues better into our curriculum, then our students will be better prepared on their next assignment. So when they leave they can start integrating those changes wherever they go, and they will have a broader impact as leaders.”