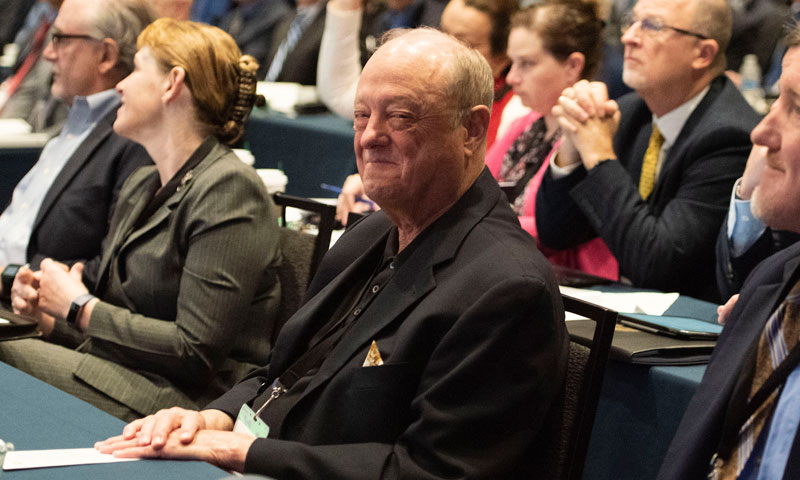 As Chair of Acquisition at NPS, the late Rear Adm. James B. Greene forged a lasting legacy through his development of the NPS Acquisition Research Program (ARP). Now nearly 20 years since the program’s launch, Greene’s realized vision remains as strong as ever, a world-class resource where the nation’s leading experts could explore all facets of the complex realm of defense acquisition.

The passing of a respected institutional leader brings with it a period of mourning within the community and the loss it feels, but there is also opportunity to take stock in, and respectfully celebrate, the legacy he or she has created. Such is the case with the passing of Naval officer, patriot, leader and educator, Rear Adm. James B. Greene Jr.

Greene’s honorable career of service to the nation, to the Navy, and to the Naval Postgraduate School (NPS), has forged an impactful, lasting legacy that remains as strong as ever today on the university’s Monterey campus, and well beyond.

“Rear Adm. Jim Greene was truly one of a kind,” said NPS President retired Vice Adm. Ann E. Rondeau in a message to the campus community. “He was a patriot, a warrior, a hero, a leader, a mentor, a colleague, and a friend to so many at NPS, and many more beyond the campus gates. He will be missed.”

Greene served the U.S. Navy for more than 50 years … 31 years on active duty with an additional 20 years as a member of the faculty at NPS. Greene excelled at being a Sailor and Naval leader throughout his three-plus decades of active-duty service. He began his career as a Surface Warfare Officer, with numerous wartime deployments to Vietnam, the Indian Ocean, and the Persian Gulf. In addition to his graduate studies at NPS, other assignments of note include project manager for the AEGIS project, the DOD's largest acquisition project, from 1984-1987; Senior Military Assistant to the Under Secretary of Defense for Acquisition from 1987-1990; and, Assistant Deputy Chief of Naval Operations for Logistics from 1991-1995.

Not to be overlooked, Greene’s impact on the AEGIS program, and in particular on the DDG-51 Arleigh Burke-class destroyer program – the longest, and some consider the most successful shipbuilding program in U.S. Navy history – led to his status as “a legend in PMS-400.”

Throughout his career, Greene experienced first-hand the impact of acquisition on his fellow Sailors, and on the nation. His deep commitment to ensuring Sailors had the most technologically-advanced systems protecting their lives and enabling their fight, developed through the most responsible and respectful means possible, led Greene to continue his career focused on defense acquisition. And it was in acquisition that he would soon forge a legacy that would impact all Sailors, and in a sense, every service-member across the DOD.

Upon his retirement from active duty, Greene returned to NPS as the university’s Chair of Acquisition in 2002, and launched the Acquisition Research Program (ARP) the following year. He envisioned a world-class resource where the nation’s leading experts could explore all facets of the complex realm of defense acquisition.

As the program grew and evolved over the years, Greene watched the organization become what he had envisioned. Acquisition experts across the nation applying sound research to the profession’s key challenges and issues, advancing acquisition practices across the entire Department of Defense, and in turn, impacting every warfighter throughout the service, as well as the overall security of the nation he loved.

“Jim Greene was a one-of-a-kind warrior in developing the Acquisition Research Program,” said Professor of Practice Raymond Jones, chair of the NPS Department of Defense Management. “His efforts led to the largest repository of defense-focused acquisition research in the DOD as well as across academia.

“The impact of this work has led to significant cost and performance improvements across many defense acquisition programs over the years,” Jones continued. “Jim’s work, and the team that he led, were noted by senior DOD and government officials as being a national resource second to none.”

Dr. Keith Snider, who served with Greene as the ARP’s principal investigator for 15 years, saw the program’s development and impact first-hand.

“Through ARP, Jim made defense acquisition research compelling and rewarding,” Snider said. “His engagements with DOD sponsors made it possible for academic researchers, who otherwise would have little or no interest in defense acquisition, to receive financial grants and data for work on sponsors' challenging acquisition problems. As a consequence, a significant number of civilian university faculty members now specialize in acquisition-related studies.”

Greene took the advancement of the ARP, and the work that bore its name, very seriously. Over the years, NPS’ acquisition program generated, literally, thousands of research papers, theses, technical reports and the like, and Greene read every single one of them. And it should be noted that generating this level of output took herculean efforts in securing resources … During his tenure at NPS, Greene brought in over $60 million in reimbursable funding to support the research efforts of over 700 NPS graduate students, 40 NPS faculty and dozens of academic partners.

“Jim was a man of service … His mission at NPS was to mentor and get resources for NPS faculty and warrior-scholars to give them the knowledge and critical thinking skills needed in today’s ever shifting environment,” said ARP founding program manager, Karey Shaffer.

“In acquisition, the ‘valley of death’ is often an unintended byproduct of an aging acquisition system that wasn’t built for the speed of modern innovation,” she added. “Jim’s unique skillset and perspective gave him the uncanny ability to navigate that valley.”

“Jim was a dedicated professional that ensured only the highest quality products were introduced into the ARP repository,” said Jones. “He personally read every line of every paper and report that was submitted for acceptance into the program. His knowledge of the subjects and his personal attention to each author, resulted in exceptional work that was read at the highest levels of our government.”

Greene held a genuine fondness for students and would use every relationship and connection he had cultivated throughout his career to support and advance their work.

“Jim was extremely generous of his time with students and very proud of the student component of ARP—not only NPS students but also students of those civilian university faculty with ARP grants,” said Snider. “He read each ARP student capstone report and sent particularly noteworthy reports to DOD/DON leaders along with personal commendations for the student authors.”

But his advocacy for students didn’t stop there, Snider said.

“At each annual symposium, he spent time with every student represented in the ‘poster show’ and made sure to connect them with influential attendees,” he added. “And in his briefings to and discussions with external stakeholders, he always praised the level of student contributions to ARP and the key role that their research played in their graduate education.”

As Greene’s legacy, the Naval Postgraduate School Acquisition Research Program, approaches its 20th year in service, those on campus who have been closely involved in the program can provide testament to his impact … And they are powerful indeed.

“Essentially, Jim elevated acquisition research to prominence both within and outside of DOD,” claimed Snider.

“The weapon systems we have today have Greene’s DNA through his persistent quest for excellence in research and studies produced through the ARP,” added Jones.

“He often said, ‘If you don’t mind who gets the credit, you can accomplish anything,’” recalled Shaffer. “We need more Jim Greene’s in the world. People that tackle hard problems for no other reason than it is the right thing to do.”

A memorial service at Arlington National Cemetery will be held at a date to be determined.