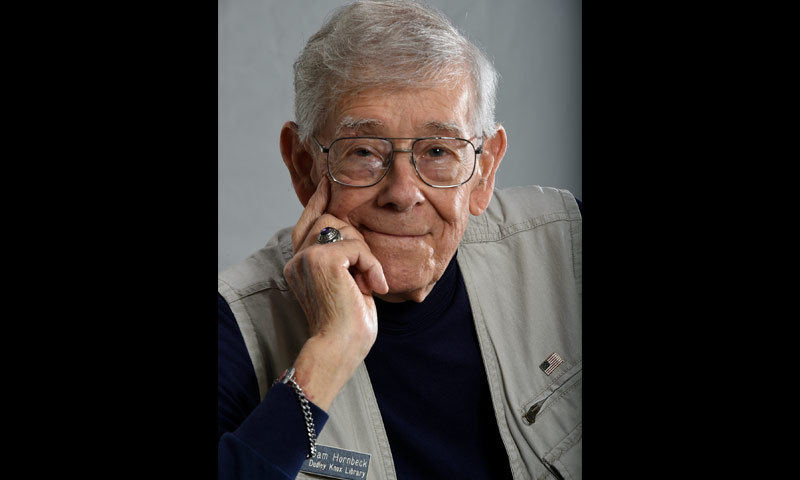 NPS Dudley Knox Library (DKL) staff member Sam Hornbeck passed away peacefully, July 18, 2021, at age 90. A memorial exhibit honoring Hornbeck’s contributions to the school’s library is now on display next to the Pearl Harbor and Battle of Midway piece to which he contributed the artwork. A digital space memorial for Sam is also being assembled.

Following a 26-year career in the United States Army, retiring as a Sergeant Major in 1975, Hornbeck soon found his next career at the university’s Dudley Knox Library, joining the staff in 1976. Over the following 34 years, the library would become one of his greatest passions and joys. He considered DKL his home and the people he worked with his family.

His co-workers recalled the many conversations and quips he would come up with, then imparting those adages as “Sam-isms.” Sam had a knack for making friends with everyone, and keeping a bowl filled with every kind of chocolate made his office a natural stop over.

Sam was an avid photographer and an aviation enthusiast. He left to the library his collection of aviation history posters and World War II aircraft models he assembled as one of his hobbies. Other hobbies included trout fishing, cartoon drawing, oil painting and being an expert prankster. He also had a great delivery when telling jokes, both “dad” and “non-dad” jokes.

As a photographer, Sam spoke with passion about his exploits in capturing images. He would point out the aesthetic ideas he would use in his compositions and what was going on in them, as well as in him, when he captured them.

As with photography, anything to do with aviation was also one of his passions. Sam talked about the Watsonville Fly-in and Air show, the Salinas International Airshow and all the great vintage aircraft he could see in just one day. His favorite aircraft was the Navy F4U Corsair.

“Mr. Hornbeck was like “dad” to all of us. He loved the library and all the people and enjoyed contributing ideas and artifacts for our historical exhibits. He was the man behind the camera, capturing all our special events.”

“Sam's humor, his commanding voice -- and his amazing grasp of the minutiae of DoD forms and processes -- are NPS legend.  The last of his kind, I think.  He weathered a lot of changes in tools, processes, leadership, and mission statements.  A real part of the history of this institution.  He will be missed, indeed.”

“Sam was a kind, sometimes funny, sometimes a bit curmudgeonly, guy who was always, I felt, warm and responsive to others. He had an enormous amount of institutional knowledge and history.”