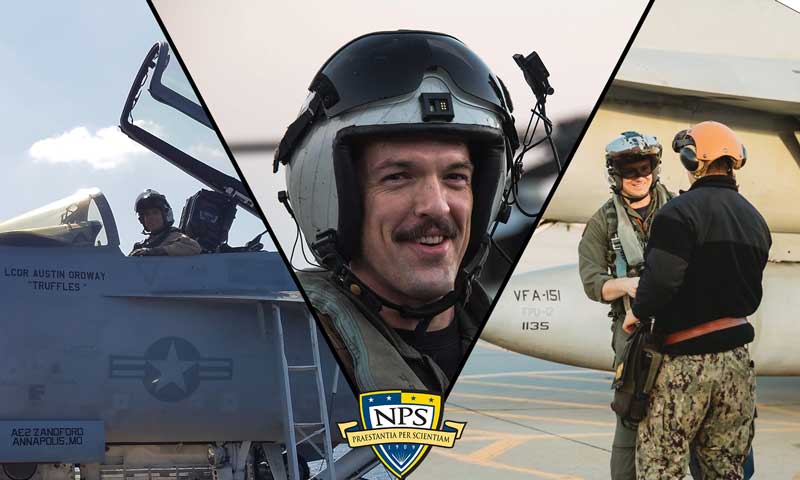 A trio of Naval Aviators attending Naval Postgraduate School (NPS) may be starting a trend – heading to command a squadron upon their graduation. All aviation community students attending NPS come to campus to research key operational problems, and to find innovative solutions to those problems, all while earning a master's degree in the process. However, not all of them will put their new education and skills to use at the command level right away.

U.S. Navy Lt. Cmdrs. Michael "Jeeves" Hooten, Philip "Lurch" Pretzinger and Austin "Truffles" Ordway will be doing just that as they are set to become Executive Officers (XO) of Naval Aviation Squadrons after their respective graduations.

While the NPS campus in Monterey, Calif. has a long history with Naval aviation, where it graduated 5,000 aviation cadets during World War II, these days the Navy sends some of its aviators to Monterey not for flight training, but to become innovative thought leaders, critical thinkers and decision-makers ready to lead in Great Power Competition and in an ever-increasing cognitive age.

In developing these leaders, NPS immerses these officers into the school's cutting-edge curricula to conduct applied research that addresses specific warfighting needs. For Hooten, Pretzinger and Ordway, each one is studying a specific operational need and taking away a transformational experience furthering their readiness to lead in an operational command.

"Leaders are expected to bring to the table the ability to think critically and solve problems, and in some cases, technological challenges … and organizational change challenges,” said McCabe. “At NPS, our graduates leave here with the technical and intellectual edge that will help their commands to deter and prevail in the all-domain battlespace. For these three officers, who were fortunate enough to refine those skills at NPS, they are not just prepared to succeed, but to excel.”

Like most NPS students, they were able to focus their problem-solving research on operational challenges they were familiar with from their time in the Fleet. With the help of NPS’ expert faculty, there is potential for their findings to benefit the fleet, and in some cases, their solutions to see fleet-wide adoption.

"My research looked at fiscal constraints and how it affects combat readiness,” said Hooten. “I was able to identify certain types of Super Hornet squadrons who may not have been getting a commensurate return on investment in terms money spent on combat readiness. I also looked at finding economical options for the Strike Fighter community to achieve their combat readiness requirements, identifying options where funds may be available to redistribute to other requirements within the Naval Aviation Enterprise.

Hooten noted, “My research is designed to get people talking. If the Navy were to choose to follow what my thesis recommends, it would be a monumental shift in naval aviation.”

Reflecting on his combined operational and NPS experiences, Hooten believes he has a new perspective and many objective tools he hopes to take to his future unit and command.

"In some of the most demanding situations, I found myself readily able to reflect on my past experiences and apply many of the concepts and frameworks we are taught here [at NPS]," said Hooten. “Particularly, our studies on leading for organizational effectiveness, strategic leadership, ethical leadership, and consensus-building, helped to better equip me to objectively evaluate past operational experiences, both successes and failures, and I am now able to more effectively apply the lessons learned from them."

While Hooten studied fighter jets, Pretzinger, a helicopter pilot, started his research with a question about helicopters that had puzzled him his whole career. In exploring the development of carrier aviation, he will be writing his thesis on, “Why are helicopters secondary to jets in the Navy's TacAir community?”

"My whole career, I've tried to figure out why we're kind of in a secondary role and there's never been a good explanation," said Pretzinger. "I'm kind of using this opportunity to look at it academically. Which I then will learn something academically to take back to the Fleet and try to apply these things as an XO to help the aviation community."

"NPS drives critical thinking," Pretzinger continued. "It's searching for and trying to understand other perspectives, including our military branches, the DoD, our allies, our partners, our adversaries. With that broader perspective, it'll help me as I go to squadron command and maybe further."

As for Ordway, he is still in the early stages of his NPS curriculum but has high hopes of integrating his financial management classes into a thesis project helping the Chief of Naval Air Training on a new aviation training program.

"The significance of coming [to NPS] is the focus on the leadership, higher-level thinking and the strategic thinking classes that we take, which are significant for later on in the career," added Ordway. "In addition, being here teaches you how you can teach other people in the future."

As pilots progress through their career on the path to serving as squadron commanders, getting out of the cockpit for higher education is imperative to develop their ability to identify, explore and solve complex warfighting challenges. As McCabe noted, this education from NPS will serve as a building block for their upcoming command tours.

"The reasons are simple, but extremely significant for Naval Aviation," said McCabe. "Education is important for our future, but the rigorous and extremely competitive requirements for command limit those educational opportunities. Officers who have already established their potential for command and have clearly demonstrated sustained superior performance are therefore able to take advantage of this opportunity.”

"There is only one window available for an aviator to come to NPS and still make command,” continued McCabe. “This window is immediately after a successful department head tour. Officers who are NPS graduates are highly educated, capable officers who are now starting to be in high demand.”

Every student at NPS produces a thesis or capstone project, and that process enables students to find solutions. As graduates returning to the fleet, however, they are now equipped to be critical thinkers and solution leaders.

"Ideally, the skills they gained at NPS will enhance their already strong resumes and help facilitate a successful command tour," said NPS’ National Security Affairs Program Officer U.S. Navy Cmdr. Paul Rasmussen. "A successful command tour will lead to increased responsibility and likely promotion to Captain for the three officers where they will lead large organizations at not only the operational but strategic level. At these levels of command, above-average levels of critical thinking and decision making are vital as we execute current strategy."

As Hooten notes, while he is ready to influence the next generation, he hopes more officers like him will gain from the operational and educational path he has traveled.

"It's really exciting to have that opportunity to shape and mold the next generation of aviators coming in,” said Hooten. "I hope that by having more and more graduates from NPS selected for command, for it sends a signal to the rest of aviation and the rest of the Navy. We should be sending our top performers and our top critical thinkers from the aviation community to NPS because they can take those critical thinking skills and all the tools and the perspectives that NPS offers back to the Fleet."

Both Pretinger and Ordway are looking forward to leading in their next assignments.

"I am very excited to get back to the Fleet, focus on getting flying again, and supporting our missions," said Pretzinger. "It'll be nice to get out with junior sailors, junior officers and get everybody working towards the same goal."

"It's just exciting to know that if you take the job seriously and do it well, you can have a lasting positive impact on all the people that walk through that door," said Ordway. "Having that influence as a commanding officer to make people excited about a career in the Navy is truly a gift."

"Our future continues to be in good hands with these officers,” said McCabe. “NPS has further prepared them to do exactly as the Air Boss directs. Fly, Fight, Lead and Win."