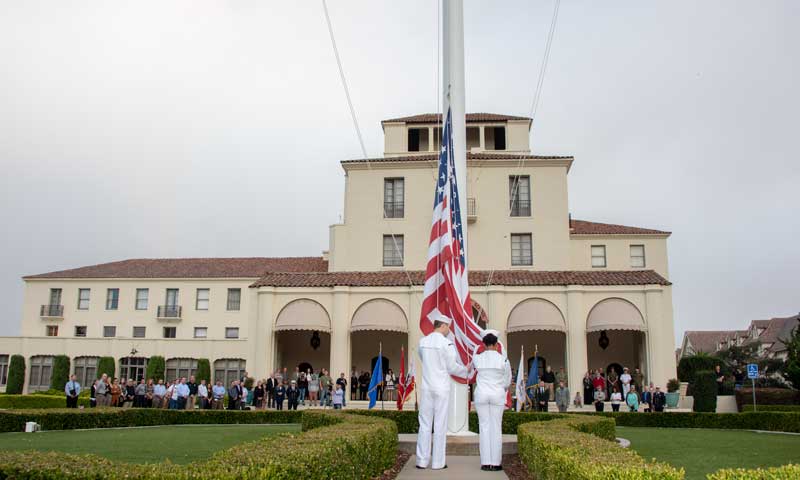 Two 9/11 first responders shared their experiences during the World Trade Center attack in New York City with students, faculty and staff at the Naval Postgraduate School and Naval Support Activity Monterey during a 9/11 Remembrance Ceremony honoring the nearly 3,000 lives lost, Sept. 11, in front of Herrmann Hall.

New York Fire Department (FDNY) Battalion Chief Timothy Rice and U.S. Secret Service Senior Special Agent Laura Hughes both spoke of the chaos and heroism they witnessed as they and their colleagues, and civilians, helped to rescue victims with no regard for their own lives.

“We’re gathered here this morning to remember the victims of the attacks and those responders who made the supreme sacrifice on that fateful day,” said Rice. “All the employees and civilians who went to work or boarded planes, never to return.

“All those at the Pentagon and on United Flight 93, the 37 Port Authority officers, the 23 NYPD officers and 343 members of the FDNY ... It is important to remember that on this day we honor and support the families of all those lost and who continue to suffer today,” he continued.

Rice brought attention to several firefighters who gave their lives that day as he provided his personal experience with each one. Whether they were his classmates, his coworkers or an acquaintance he met during a promotion and retirement party held under the shadow of the World Trade Center, Rice wanted them to be remembered.

“I had the honor of working and knowing some of the most exceptional people, and the bravest firefighters who are no longer with us,” said Rice. “As we honor them on this day of remembrance, we renew our vows to never forget. For those of us here today in the Center for Homeland Defense and Security, for those who remain in the fight and respond to the call, let us all vow to do everything we can to ensure, never again.”

Hughes, who was less than a year out of the Secret Service Training Academy that fateful day, recalled how beautiful the morning was as she headed to her assigned post at the Secret Service Field Office at the World Trade Center.

“As I headed into work on the morning of September 11, 2001, I actually remember thinking what a beautiful day it was,” said Hughes. “Little did I know that in less than an hour, it would be the most memorable day of my life.”

From the streets of the Word Trade Center site, Hughes recalled the chaos around her and the unified effort of first responders and citizens to assist the victims.

“All I remember seeing was a burst of orange out of the corner of my eye,” said Hughes. “After rallying at a relocation site, agents and officers from our office assisted in many ways that day. Some ran into the towers to help with the evacuation. Others assisted firefighters and police on the ground. The remaining evacuated schools in the area and assisted with triage of the injured. I was amazed at the heroic efforts of our first responders and the citizens who raced into the building to try and save as many people as they could with no consideration for their own lives.

Both keynote speakers of the 9/11 Remembrance ceremony echoed the importance of remembering.

“I am afraid as time marches on, we and future generations will have forgotten the horrific events that unfolded on September 11, 2001,” said Hughes. “I know the family members, the first responders, our military and the hardworking homeland security employees have not forgotten. It is my hope that we as a country never forget what happened that fateful day. That we continue to be vigilant in our fight against terrorism and always remember the precious lives that were lost.”

“The further we get away from 9/11, the harder it is to encourage people to remember,” added Rice. “This means the world to us that these types of ceremonies take place. If we start to forget 9/11 or incidents like Pearl Harbor, the focus goes away. This remembrance, I believe, goes hand-in-hand with ensuring that we’re doing everything we can as a country to prevent the next one.”