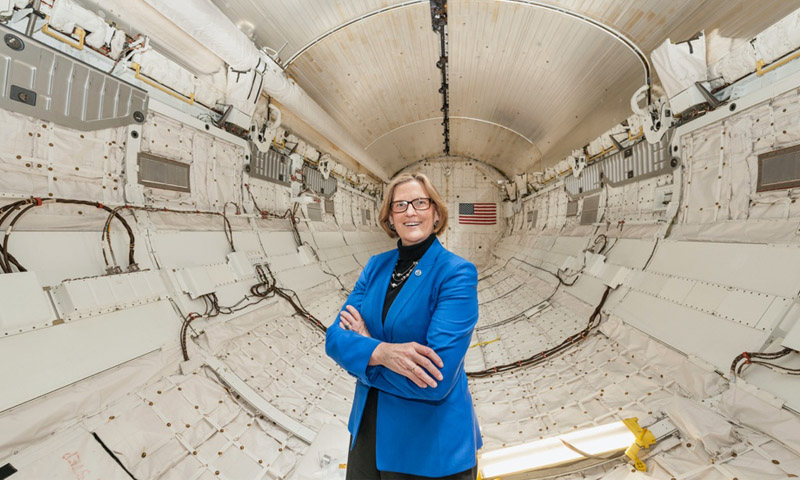 Former NASA astronaut, aquanaut and NOAA Administrator, Dr. Kathy Sullivan will share her leadership journey during the next Secretary of the Navy Guest Lecture, to be broadcast live on the NPS Streaming channel, www.NPS.edu/watchlive, on Tuesday, Aug. 25 at 3:00 p.m. PDT.

Ahead of Women’s Equality Day, this year honoring of the 100th anniversary of women gaining the constitutional right to vote, former NASA Astronaut and oceanographer Dr. Kathryn Sullivan presents “From Sea to Space and Back Again: Lessons from an Unconventional Leadership Journey” on Tuesday, August 25, live at 3:00 p.m. PDT.

Sullivan was one of the first six women to join the NASA astronaut corps in 1978 and holds the distinction of being the first American woman to walk in space. More recently, her submersible dive to the Challenger Deep in June of 2020 made her the first person to both orbit the planet and reach its deepest point.

Since leaving NASA, she held Presidential appointments on the National Science Board and as Chief Scientist and Administrator of the National Oceanic and Atmospheric Administration (NOAA). She currently serves on the boards of International Paper, Accenture Federal Services, the National Audubon Society and Terra Alpha Investments, and is a Senior Fellow at the Potomac Institute for Policy Studies.

“I’m an oceanographer who went into space, and an astronaut who went into the deep sea,” said Sullivan. “They are two different missions in almost opposite environments, but exploring these two extremes had a common purpose, and that was to understand how our planet works. I was also a naval officer, and I know that NPS has strong curricula in space and oceanography, the latter you might expect, but a little known fact about NPS is that it provides more astronauts to NASA than any other graduate university. Space connects our world and our naval forces around the globe.”

According to NPS President retired Vice Adm. Ann E. Rondeau, as an astronaut, an aquanaut, a naval officer and a leader, Sullivan is an extraordinary inspiration to the next generation.

“We are fortunate to have her to speak to the NPS community and beyond,” said Rondeau. “Her life is a brilliant testimony to the American spirit of science and innovation, and also a fitting tribute to what is possible in the pursuit of knowledge that our great country enables. Her talk is especially appropriate as we also honor the 100th anniversary of American women’s constitutional right to vote.”

SGL presentations are delivered in a “TED Talk” format for accessibility to a broader audience. The talk can be viewed live online via the NPS streaming channel [https://www.nps.edu/watchlive] on Tuesday, August 25 at 3 p.m. PDT.