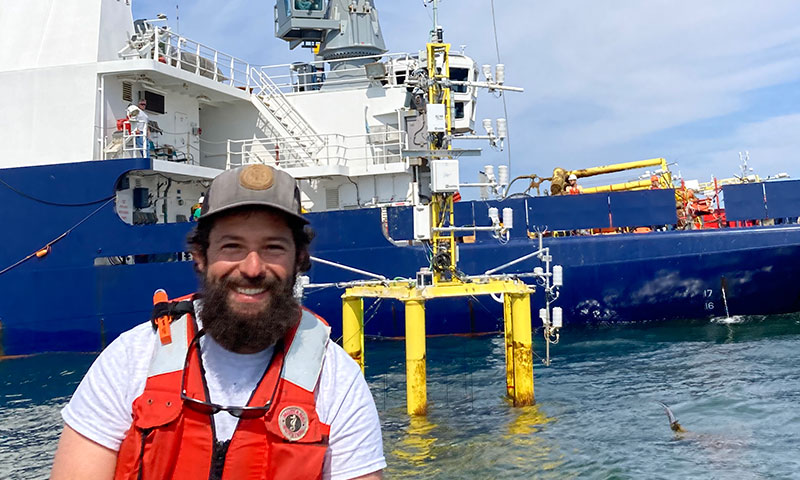 Dr. David Ortiz-Suslow, a research assistant professor in the Naval Postgraduate School (NPS) Department of Meteorology, was one of 25 awardees selected for the Office of Naval Research’s (ONR) highly competitive Young Investigator Program (YIP). His research addresses a critical gap in the understanding and numerical representation of ocean wave impacts on the temperature and humidity structures in the lower atmosphere, critical for shipboard combat systems effectiveness.

Ortiz-Suslow was chosen from 170 candidates for his proposed research in marine atmospheric surface layer processes, which impacts the electromagnetic propagation environment for Navy systems like radar, radio and optical communications systems, and directed energy weapons. Ortiz-Suslow’s project, entitled “The Impact of Waves, Breaking, and Marine Aerosol Loading on the Marine Atmospheric Surface Layer,” was selected for investigation in the Ocean Battlespace and Expeditionary Access category, and supports the Chief of Naval Operations’ 2022 Navigation Plan (NAVPLAN) Force Design Imperative to Harden Defense for ships at sea.

“Electromagnetic systems are things like navigation technology, communications equipment, and both offensive and defensive weapons systems,” said Ortiz-Suslow. “All of these systems depend on the natural environment, and we have to understand how they interact with the environment around that asset.”

“ONR, and the Naval Research Enterprise as a whole, is committed to reimagining naval power,” said Chief of Naval Research Rear Adm. Lorin C. Selby. “In order to achieve this, we need to attract the best and brightest scientists and engineers from across academia to take on warfighting challenges. The Young Investigator Program does just that.”

According to Ortiz-Suslow, “NPS is the perfect place to conduct this research. Not only do we have the technical expertise for this research in the faculty, but we also have students who have first-hand operational experience using the equipment we are trying to make more effective.”

“Professor Ortiz-Suslow has been a rising star since we first encountered his research at University of Miami. He has continued to grow as a leader in the community on National Science Foundation, ONR, and other federally sponsored projects and is a great asset for the Naval Postgraduate School faculty and students. His proposal was innovative and unanimously ranked very highly by an inter-disciplinary selection panel. I’m looking forward to seeing the results of his research,” said Eleuterio.

Ortiz-Suslow will receive a three-year grant to support his proposed research, which will ultimately advance the Navy and Marine Corps’ understanding of the operational environment and its impact on critical naval systems.

Following the award of his doctorate in applied marine science from the University of Miami, Ortiz-Suslow began his career at NPS as a postdoctoral scholar studying how waves and currents affect atmospheric turbulence. His grant through ONR’s Young Investigator Program will advance that work.

“The research I will conduct will build on studies I worked on during my post-doc,” Otriz-Suslow noted. “Aboard a research platform in southern California, we made some very interesting discoveries about how surface waves impact and modulate the lower atmosphere.”

While Ortiz-Suslow is an accomplished researcher in his field, he is looking forward to having a more active role in guiding the research, and working collaboratively with his partners, over the grant’s three years. The ONR YIP program is very selective, he added, and he is grateful to be a part of the program.

“I was ecstatic to be recognized by such a prestigious program,” said Ortiz-Suslow. “The scientists that got this award this year are really amazing, and I am incredibly honored and humbled to be included with such a fine group.”

Since 1985, the ONR Young Investigator Program has provided funding to select early career researchers whose work demonstrates “outstanding promise for supporting the Department of Defense, while also promoting their professional development.”