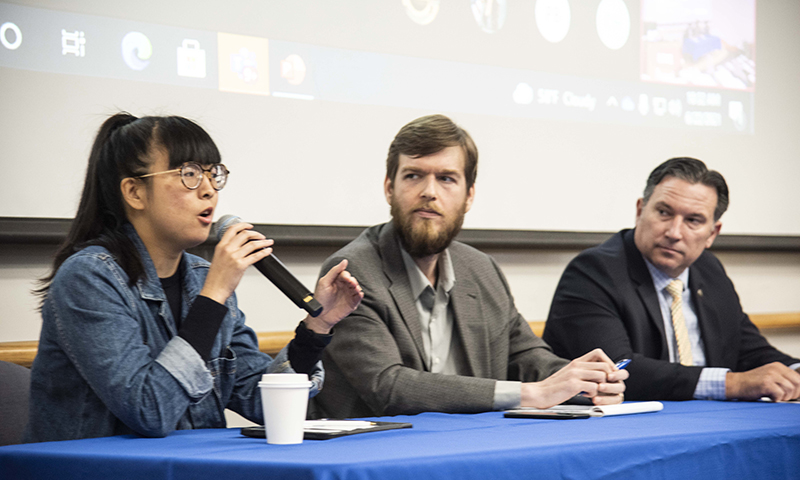 In today’s environment of ‘alternative facts’ and false narratives propagated over social media, along with masterful campaigns of disinformation shaped by both China and Russia, effective information and political warfare strategies are as critical as ever.  This is the domain of the DOD’s Information Strategy Research Center (ISRC) on the Naval Postgraduate School (NPS) campus, which brought together a community of experts for the Symposium on Information Strategy and Political Warfare (SISPoW), June 22-24, to examine China and Russia’s infiltration of mass media and how it has affected democracies.

NPS Associate Professor of Defense Analysis and symposium panelist Dr. Camber Warren led off the discussion, describing how subversive and malign messaging emanating from China or Russia has leveraged existing social divisions to trigger violent responses by segments of Americans that find themselves increasingly disenfranchised.

“These segregated echo chambers pose a national security problem because it creates vulnerabilities and fosters violent divisions among the populace,” said Warren. As new communication technologies are reshaping the information environment to facilitate targeting of narrower audiences, Warren noted, incentives arise for many actors to engage in messaging “on social media platforms like Twitter, [and] that feeds divisions.”

It’s no secret these attacks emanate from cyber criminals shielded within the borders of nation-states, many supported by those peer adversary governments, according to FBI investigations on cyber attacks and intrusions. The SISPoW previously tackled cyber and information strategies and tactics in the post-Cold War environment. Now, this year’s session is focused on strategies within the context of Great Power Competition (GPC) for Geographic and Strategic Reach.

Symposium coordinator, NPS Defense Analysis department Assistant Professor Ryan Maness, describes these nefarious cyber practices by both large and small nation-states as being guided just beneath the threshold of what is considered the international law of armed conflict.

“The symposium panelists discussed how rapid technological change has forever altered the information space, where instant access to information via the Internet has made the world's liberal democracies, including the United States, very vulnerable,” said Maness.

“As we shift our grand strategy to Great Power Competition, we know that our authoritarian adversaries are taking advantage of prolific instant access in free societies and have been attacking us in the cognitive space.

“These cyber intrusions also imply that competition outside of the warfighting domains is just as salient, as China’s tech sector aggressively spreads its influence through their Belt and Road Initiative, and Russia continues to utilize technology to sow discord and chaos in democratic societies,” Maness continued.

This year’s symposium covered crucial topics in the cyber domain and the information environment with discourse on ‘free speech versus disinformation’ and ‘how public and private sectors can better work together’ for national interests in thwarting attacks.

International cyber information experts Marc Lanteigne of the University of Tromso and Dr. Whitney Lackenbauer of the North American and Arctic Defence and Security Network, agree that China is attempting to gain a foothold in the Arctic by several means.

“China wants to legitimize its future in the Arctic by creating businesses around it and as part of a long-term tactical strategy in the region, like in so many other parts of the world, and will continue to shape their narrative,” said Lanteigne.

Russia’s narrative is to create the idea that U.S. and NATO are threatening Russian sovereignty. Both China and Russia have attempted to distract its people regarding human rights issues, Lackenbauer noted, pointing to eight elements of strategic distraction.

“Russia is about disruption – China’s ambition is to build stability and to be perceived as providing a ‘win-win’ situation to gain access with help from Arctic states. China does not share a border with Arctic territory but wants to put on a face of benevolence to push back for an Arctic presence. China is also excluded from the region’s ocean governance policies,” added Lackenbauer.

NPS Distinguished Professor of Defense Analysis Dr. John Arquilla and Wittenberg University Professor Emeritus of Political Science Dr. Bin Yu wrapped up the symposium with a discussion on the future of U.S., Russia, China relations and what can be done.

Yu’s recent article, “Empire Strikes Back at Moscow and Beijing,” says that the changing of the guard at the White House did not reset ties with Washington. Instead, the Biden administration has turned up the heat by re-joining with its alliances with a strong message of ‘America is back.’

“China sees Putin as a jigsaw puzzle because he has distanced himself from China. Both China and Moscow have created a sense of danger and threat from each other. These are polarized misrepresentations,” said Yu.

For example, during the 2013-2014 Ukraine crisis, Beijing positioned itself neutral between Moscow and Kiev. The Ukraine has since become a major hub for China’s BRI in Europe, and China has displaced Russia as Ukraine’s largest trading partner, he added.

As the symposium concluded, Maness re-emphasized how Great Power Competition will largely be conducted with operations below the threshold of armed conflict. In other words, operations in the information environment, primarily via cyber means, will continue to be a highly-contested space.