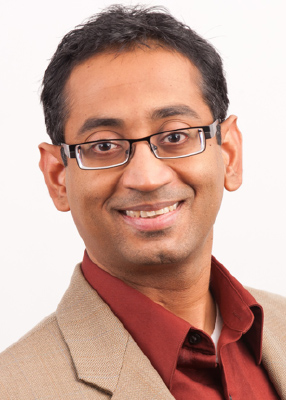 In this talk, development of microchannel heat exchangers for electric power generation using various sources of thermal energy will be described. A cycle analysis will be used to show the impact of microchannel recuperators and heat exchangers on the system performance.  Emphasis will be placed on supercritical carbondioxide (sCO2) cycles, wherein the performance and cost of the plant is strongly dependent on the heat exchanger design. Heat exchanger designs for sCO2 cycles is challenging due to the high system pressures (200-300 bar), moderate to high temperatures (500-800 C) and, in some cases, cycling thermal loads. The design and fabrication of microchannel sCO2 heat exchangers for concentrated solar, fossil, and waste heat recuperation will be described, followed by experimental characterization results and future plans.

Vinod Narayanan is a Professor in the Department of Mechanical and Aerospace Engineering at UC Davis. He is also the Associate Director of the UC Davis Western Cooling Efficiency Center. Prior to joining UC Davis in 2015, he was a Professor at Oregon State University (OSU). He earned his PhD from Texas A&M University in 2001 and joined OSU thereafter. He has published extensively in the areas of   microchannel heat and mass transfer, phase change heat transfer, energy efficiency and solar thermal utilization. His group’s current and past work has been funded by a variety of agencies such as NSF, NASA, Department of Energy, Office of Naval Research, and the California Energy Commission.