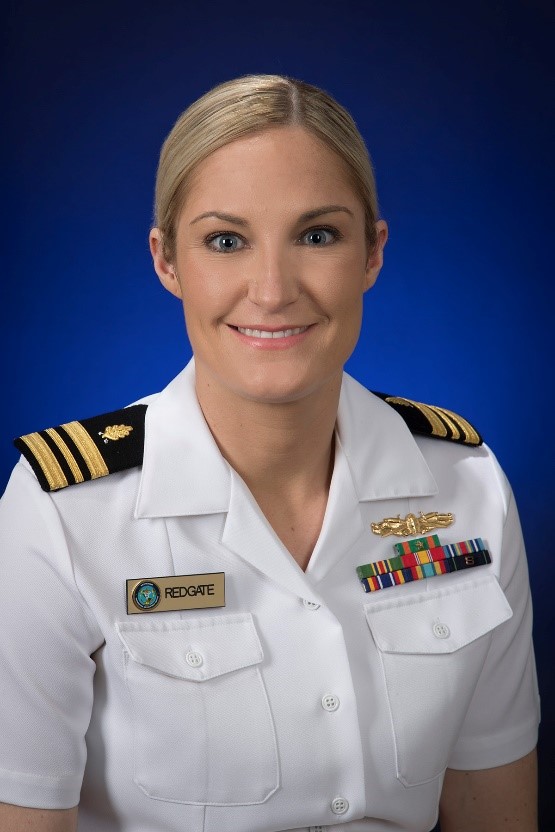 Lieutenant Commander Redgate is a native of San Diego, California.  She attended the University of Notre Dame on an ROTC scholarship from 2002-2006 and received a BA in Psychology.  She then attended Boston University Goldman School of Dental Medicine on the Health Professions Scholarship (HPSP) from 2006-2010.  She commissioned in 2010 and reported to Balboa Hospital, San Diego, California for General Practice Residency Training from 2010-2011.  She served as a dental officer onboard the USS Carl Vinson (CVN 70) from 2011-2013, and then served as a dental officer at Naval Branch Health Clinic, Naval Base San Diego (NBSD).  She deployed on the USNS Mercy for Pacific Partnership 2015, serving as the Dental Department Head for the Humanitarian Mission, and dental subject matter expert for the ADVON team supporting operations in both Fiji and the Philippines.  In 2015 she was selected for the Comprehensive Dentistry Residency Program at the Naval Postgraduate Dental School in Bethesda, Maryland.  In 2018 she received her Comprehensive Residency Postgraduate Certification and a Master of Science in Oral Biology from the Uniformed Services University of the Health Sciences (USUHS).

In July of 2018 she reported to Naval Postgraduate Dental School, Monterey California where she currently serves as the Dental Department Head.  Her personal decorations include the Navy and Marine Corps Achievement Medical, Surface Warfare Medical Department Officer qualification, and various other service and personal awards.